It’s time for Cambridge to cut all ties with fossil fuel giants.

Cambridge’s ties to the fossil fuel industry have long been an uncomfortable but undeniable certainty within university life. From the Chemistry department’s BP branded lab coats, to endowed professorships such as the Shell Professor of Chemical Engineering, the presence of fossil fuel giants within the University has been normalised for years. Despite persistent calls from activist groups like Cambridge Zero Carbon and the general student body for the University to divest its £377 million investments in fossil fuels (as of 2014), little action has so far been taken.

Yet as the climate crisis intensifies, and the 2030 target for cutting CO2 emissions before climate change becomes irrevocable draws closer, Cambridge’s continued complicity in the fossil fuel driven crisis is no longer tenable. In October, the Cambridge Zero Carbon Society released a report detailing the extent of the university’s embroilment in the fossil fuel industry, and the revelations were shocking. Cambridge has received over £18 million in research funding from fossil fuel companies since 2001. Technology developed at the BP Institute (a large research facility of the Department of Earth Sciences) has contributed to increased profits from fossil fuel extraction between $300 million and $3 billion per year, and yet more recently The Guardian has announced that Cambridge has accepted a £6 million donation from Shell for research into fossil fuel extraction. 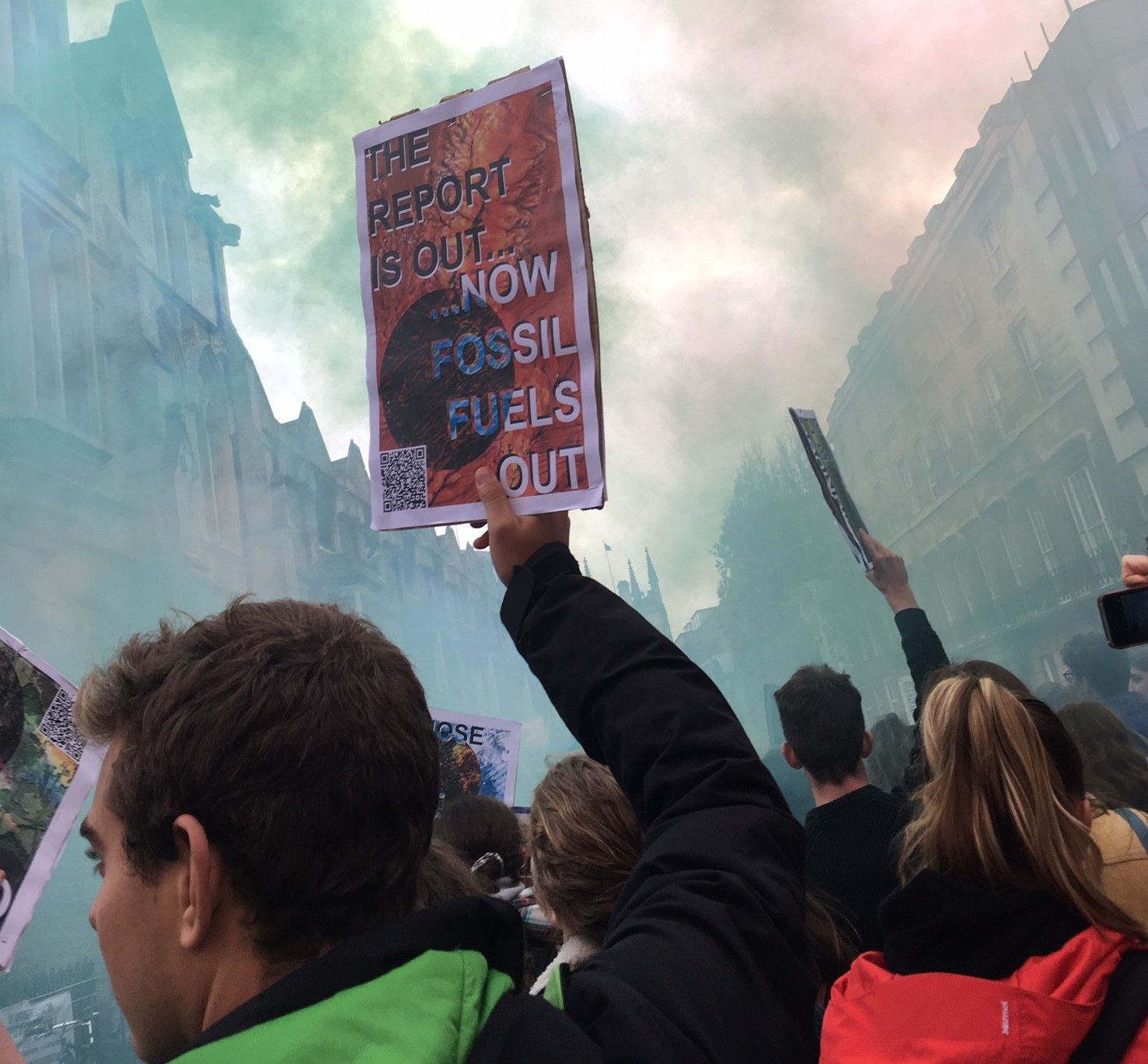 The most recent Zero Carbon protest

Whilst these colossal figures can feel overwhelming and disenfranchising, such revelations should provoke outrage. These are no small-scale interactions. They constitute a relationship with companies whose actions have current and devastating impacts on the lives of millions, particularly in the global south, with the plight of the Ogoni being the most well known case of this. Cambridge is not only benefiting from donations at the expense of these people, but is supporting the work that causes their strife. The physical premises of the BP Institute and CASP (a research group affiliated with the Department of Earth Sciences which specialises in the global search for new oil resources) on Cambridge sites are very real symbols of how fossil fuel companies exercise huge sway within our institution.

More than that though, Cambridge has a large part to play in the conditioning of companies like BP and Shell’s public image. Their apparent commitment to ‘greenwashing’ these companies through the promotion of schemes like ‘The Shell Energy Transition Game’ validate their actions, and enshrine them in a narrative of progressiveness and charitability that is particularly damaging given Cambridge’s global platform.

To such an end, it appears that Cambridge has become not only a refuge for fossil fuel giants, but an active agent within the climate crisis; and it seems that they are well aware of it. Varsity has revealed that prior to the release of the Zero Carbon report, the University obtained a leaked copy which prompted them to remove CASP from the Cambridge Earth Science website, where it had previously been listed as a ‘research group’ for the past 18 years. 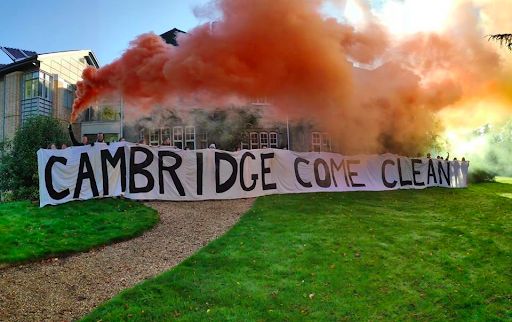 Yet the situation is not without hope. The actions of the University provoke a galvanization amongst a student body that is not prepared to let such actions pass. The existence of the report itself is testament to a sustained commitment to challenging Cambridge’s relationship with fossil fuel companies, and often translates into direct and hard-hitting protest actions. Zero Carbon’s recent blockading of the BP institute, as well as the mass rally held last week, show that students are committed to bringing about change. 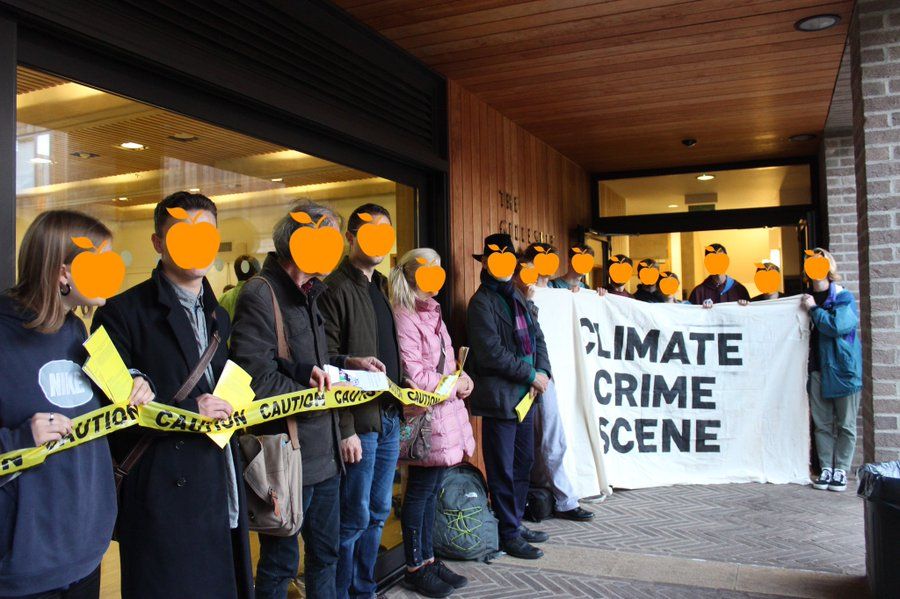 A prior BP blockade

The solutions are not abstract; cutting ties with fossil fuel giants across the board, from the acceptance of donations, granting of fellowships and terminating of all research on behalf of these companies are real and concrete steps that can be taken to alleviate the impact that our university has on the planet. Divestment from fossil fuels investments has been a demand for years and change is coming. In September, Jesus College exited all direct investments in fossil fuels, following in the footsteps of numerous other colleges over the past few years. Reinvestment in climate solutions is not only viable but also pressingly necessary, and college divestments show that people are increasingly sympathetic to the idea.

The issue of Cambridge and fossil fuels is not like other political issues in which we engage during our time here, where nuance and restraint are valuable. The climate crisis is real and pressing. If Cambridge does not act now, it will play a significant and undeniable role in hastening the catastrophe.

In response to the £6 million donation, a spokesperson from Cambridge University said to The Guardian: "The main focus of Prof [Lynn] Gladden’s proposed research related to the gift is on supporting the transition to a zero-carbon economy by improving chemical reactions in fuel cells, electrolysers and making chemical processes for industrial use more sustainable”.

The University also told The Guardian that, since the donation, it had called for a "set of principles" by which to assess future donations from companies involved controversial activities such as fossil fuel extraction . To this end, the University stated that it had invited "among others, the student society Cambridge Zero Carbon, Friends of the Earth, climate scientists, Shell, council members and members of the [university’s committee on benefactions and external and legal affairs]" to a meeting to explore these principles.

Photo credits to: @ZeroCarbonSoc on Twitter and author's own.

They could be the first women on the moon