Review: The Hound of the Baskervilles

When I arrived at the Corpus Playroom, I knew I was about to watch Sherlock Holmes solve a mystery – with a little extra comedy thrown in. I was pleasantly surprised by just how much comedy there was; the play, written by Steven Canny and John Nicholson, is a hilarious and lively re-imagining of Arthur Conan Doyle’s famous novel. In some ways, the plot is remarkably faithful to the original, incorporating the same iconic characters, shocking twists and striking locations. But this modern adaptation, well directed by Sarah Taylor, infuses the tale with a vigorous exuberance that makes for a light, yet delightful viewing experience.

Much of the comedy emerges from the sheer chaos of the performance. Three actors are tasked with juggling seventeen characters between them, comprised of detectives, lovers and murder suspects. Amongst a flurry of skillfully quick costume changes, the audience meet a host of memorable figures, including a pretentious Sherlock Holmes (Benjamin Gibson), a trigger-happy Watson (Sophie Scott) and a love-struck Sir Henry Baskerville (Joseph Folley). Together, the characters unravel the mystery of the horrific murder of Sir Charles Baskerville. Adding to this chaos there is another fascinating layer to the performance. At times, the actors slip out of their roles momentarily, assuming their own identities in a series of particularly humorous scenes. 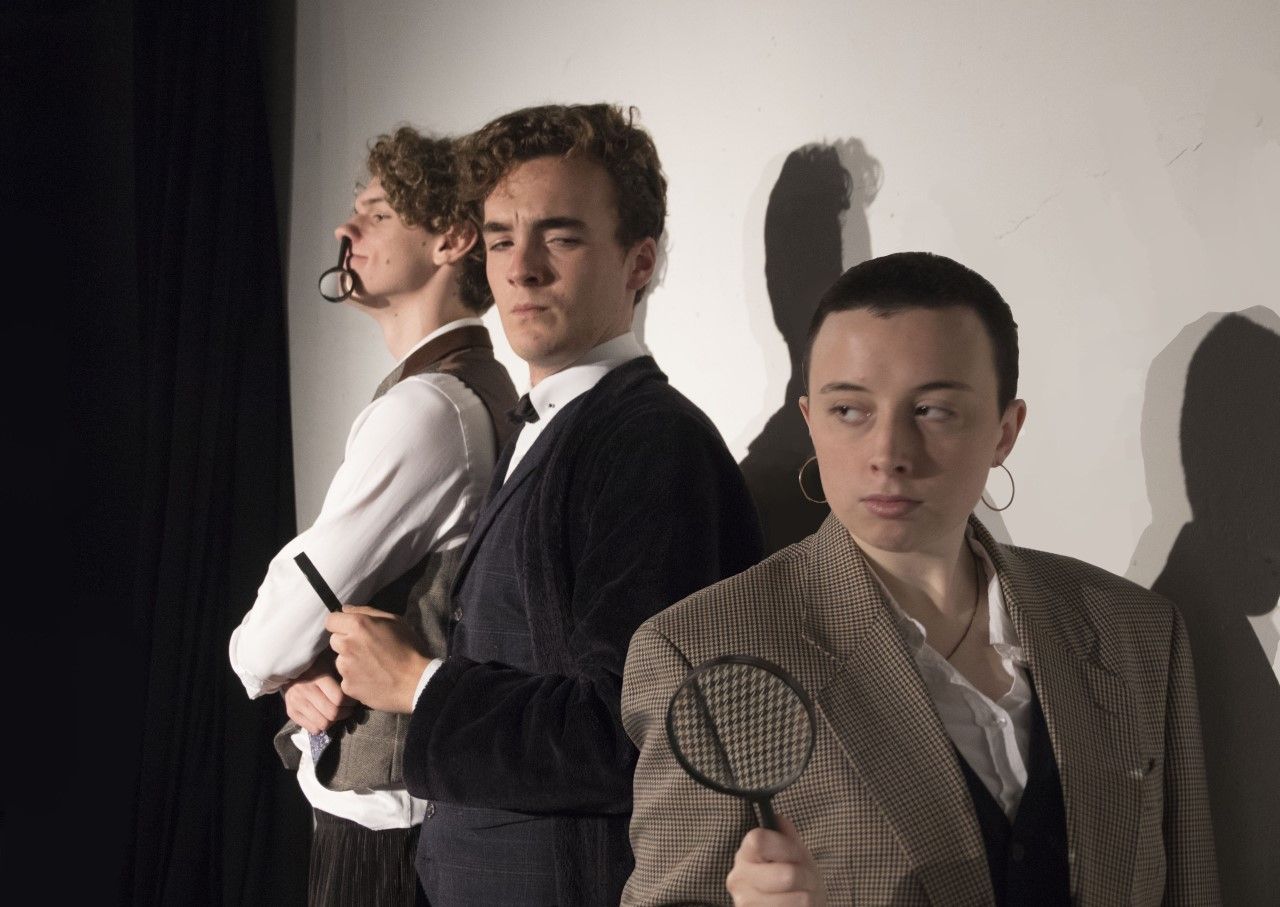 Given the challenges of switching roles so often and so quickly, the performance of the three actors is astounding. Benjamin Gibson plays the most striking characters, effortlessly drifting between the roles. Watching the same actor who plays Sherlock Holmes and the villainous Stapleton transform into Cecile, a passionate Irish lady, is equally startling as it is amusing. Alongside Benjamin, Joseph Folley offers us a naïve and endearing Sir Henry Baskerville. You cannot help but warm to his frantic gestures and unfortunate habit of loosing of his trousers. Sophie Scott’s role is equally well acted: she expertly navigates the role of Watson and a narrator who frequently breaks the fourth wall. The small cast do a tremendous job of bringing out both the subtle and farcical humour of the play.

The play is at its strongest when the actors neglect the murder mystery to play themselves. Just after the interval, having a read a negative review on Twitter regarding the first half, Gibson resolves to replay the entire show. When I first heard this, I wondered how the cast would pull this off in a way that does not seem either tedious or awkwardly overdramatic. What followed was a masterfully pacey and frantic retelling of the first half, which generated laughter from all over the auditorium. I spoke to a few members of the audience after the production and they unanimously agreed that this was the strongest scene. 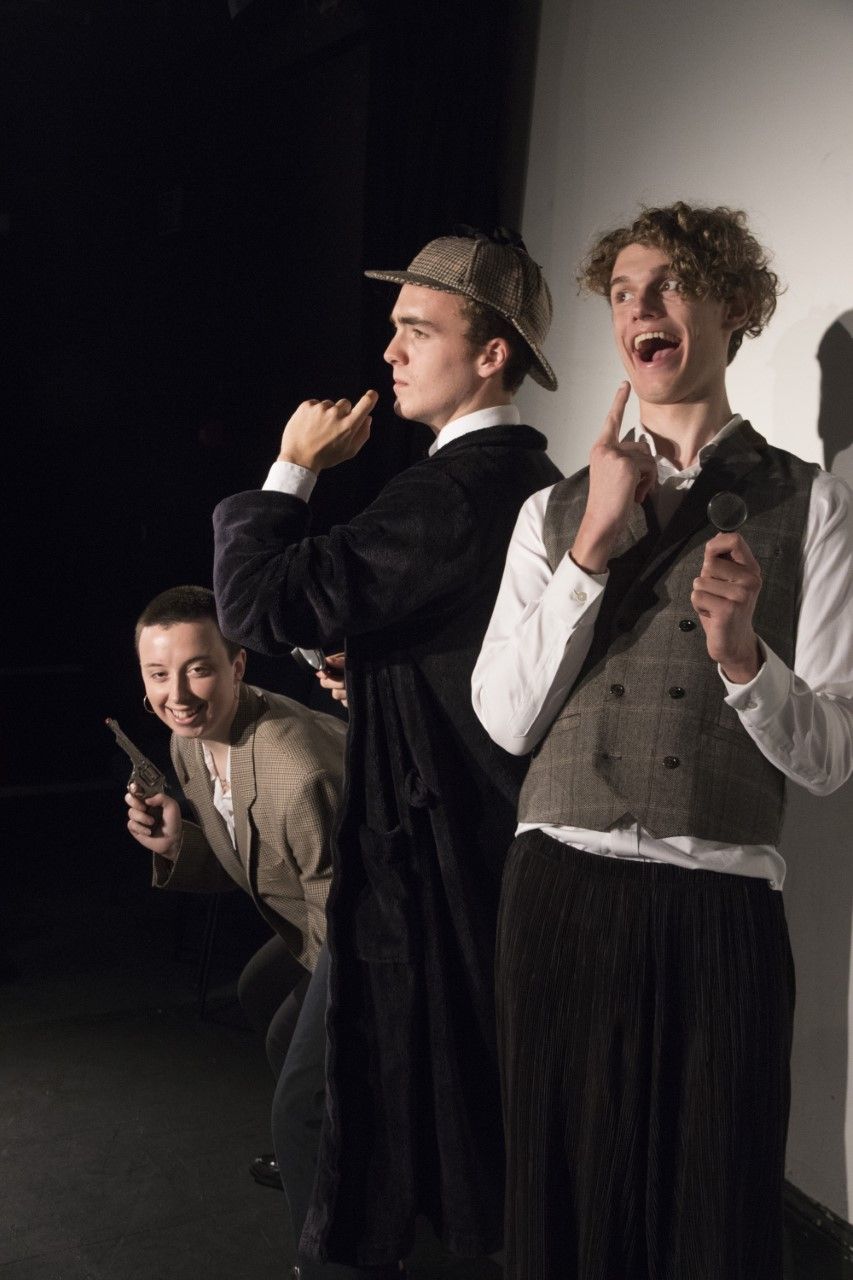 The performance also uses its space and props well. The stage is filled with hidden gems, including a fire-place that doubles up as a bed, a faulty light that swings onto the stage and a misspelt sign saying “Welcome to Dartmoo”. These props are seamlessly integrated into the production and used effectively by the cast, who mime in most scenes.

One criticism I have is that the second half, following its exciting opening, loses momentum as the characters try to solve the crime. The humour never quite returns to its peak and the performance slows down as a result. There are still brilliant moments of comedy here, such as Watson’s lament over a stuffed corpse, but it lacks the vivacity found earlier in the play.

Great acting, interesting set designs and charming comedy. This is a fun, light-hearted performance that offers the perfect opportunity to ease the stress of Week Five.