The Tab meets the creators of the Feeling Blue documentary

On May 4th, Feeling Blue: Mental Health at Cambridge University, will premiere at the Cambridge Union, free and open to all – student and non-student. I was able to interview Luke, producer-director and writer, and Jay, producer-composer, before the release. Despite their concerns about student mental health at Cambridge, they expressed optimism about working with the university for change.

The Tab: Why is this film so importance to you, and why should it be to everyone else?

Luke: It was never a journalistic endeavour. A lot of stories weren’t being told – but as soon as you dipped your foot into this issue, you were overwhelmed by the stories. We’ve had over 30 people send in their clips because we couldn’t get to them.

The Tab: What do you think about the term ‘imposter syndrome’? Is it helpful, or only conceal things?

Luke: The term we look at is the ‘Cambridge myth’ – imposter syndrome definitely fits into that. Oxbridge is seen as unequal in a lot of ways and students spend years trying to get there. Some interviewees felt that prevented them from coming forward, especially to family and friends. You’re meant to be eternally grateful to be here.

Jay: We’re not singling out Cambridge as worse than other universities. Cambridge is probably in the middle of the pack. But it could be the leader of the pack, given the extent of resources available, it could be one of the country’s, or even the world’s, leading universities for student welfare. 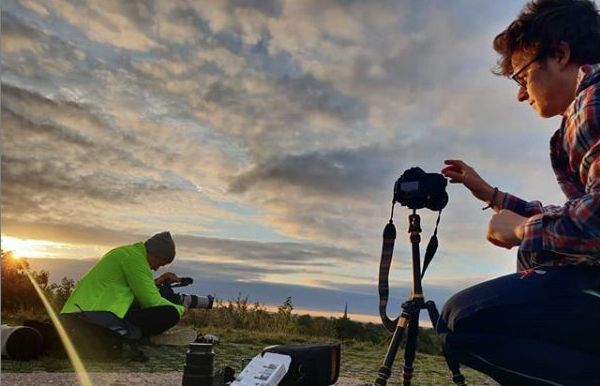 The team on set. Image from @feelingbluedocumentary

The Tab: Amongst the interviewees, was there a gender imbalance or an imbalance in terms of other aspects of people’s backgrounds?

Luke: I think the gender imbalance typically lies with women coming forward, participating in surveys more. Women are prescribed more mental health drugs and basically, male suicide rates overall are higher. For our documentary we deliberately tried to get a spread of experiences. But equally we're trying to deal with issues that effect all Cambridge students and I think there’s enough common ground that overrides all backgrounds and all genders.

Jay: Having said that, there are specific challenges that people of different backgrounds face – this documentary is intended to be neither the beginning nor the end of the conversation.

Luke: What I would love more than anything is for our documentary to inspire further studies. We are actually producing J talks and a large document entitled Findings and Unanswered Questions to be presented to the university for a continuation of the dialogue. We are also producing a toolkit for people who want to make documentaries like this.

The Tab: Were there any negative responses to your project?

Luke: When speaking in vague terms to friends and family, the one essential criticism is that we're just another angry group of students trying to write a ‘Gotcha!’ journalistic film. All we want to do is tell these stories and find clarity. We are genuinely trying to be as integral as we can.

Jay: Yeah, it’s not supposed to be sensationalist. The vast majority of research has come from anonymous sources for reasons of confidentiality. Some of this information is completely harmless in real terms, but we've had to dig so hard to find it. If it’s difficult for an 8-person documentary team to find in a year, no fresher will ever find that information.

The Tab: Obviously it’s a lot of practical hard work, but also emotionally I imagine that a project like this is a massive burden to put on yourself.

Luke: You’re incredibly inspired by the stories and given a lot of hope because, my god, it used to be so much worse. The grading, secrecy, intermissions – but yes, it has had an emotional toll on me. Then again, is it really a good film if you don’t have fundamental empathy and an emotional connection with the message? I’d do it again in a heartbeat.

Jay: The most draining part of it has been the recurring thought, why is this information so difficult to find? Why do I need to go to a source who has to be anonymised so they won't lose their job, in order to find out information that ought to be public to all students? It's become evident that a culture change is needed. Reading through the university's general proceedings and going deeper into how it's governed, there are signs of pushback in certain areas regarding reform. It's not something the entire collegiate university can unite behind.

The Tab: You’ve been talking a lot about the institution's role, but what about the individual student? What can they do to help themselves and the student body as a whole, and not reinforce the issues?

Jay: If you add up the number of people who for various reasons are likely to find it difficult to ask for help, saying ‘ask for help when you need it’ has a strong potential for covering up the real issues. There are reasons why people don’t ask for help, same as there are reasons why people don’t report sexual assault. Every staff member we’ve spoken to has invested real time into making sure the students get help. At the minute, some of that support has to come out of the goodwill of a supervisor or a DOS -we’re keen for structural changes that mean people don’t need to rely on goodwill for help.

The Tab: Any advice for students this exam term?

Jay: You may have to dig around Cambridge to find help – it's hidden in all sorts of unlikely corners, but it is there. Having done a year’s research on this, I promise if you keep looking, you'll find it hidden in the rabbit warren that is Cambridge.

Luke: My advice would be to just breathe. Don’t criticise yourself for being swept up in the Cambridge exam term but equally not for stepping away.

The 'Findings and Unanswered Questions' document will be released, with an online general release of the film, in the week after the premiere.