An interview with Rodney Kelly, leader of the campaign to repatriate the Gweagal spears to Australia

On Thursday evening, Rodney Kelly gave a talk at St John's College, hosted by the Decolonise the History of Art and Architecture group, on the importance of repatriating the Gweagal spears to Australia. Despite belonging to the Gweagal people, several spears are currently held at the Cambridge Museum of Archeology and Anthropology as property of Trinity College. Originally, between 40 and 70 spears were stolen by Captain Cook and his men on their first landing at Botany Bay in 1770, most of which have never been recovered. 2020 will be the 250 year anniversary of that landing – which in Australia is being celebrated by monuments to Cook, rather than government effort to repatriate the spears.

Kelly, as a direct descendent of the warrior Cooman who fought and was shot on that day in 1770, is at the head of this campaign and has made the 20+ hour plane journey to Cambridge numerous times. He has worked tirelessly despite relentless opposition from Trinity College, the British Museum and his own parliament in Australia. 'My own government, my own museums, don't even want to come to the table, [because of] dealings with the British Museum.' There was a solemn atmosphere, but Kelly's optimism and immense dedication to repatriation by 2020 were deeply impressive. In the meantime, he was keen for British museums to get Aborigine input for their exhibitions, rather than displaying looted objects without acknowledgment of their cultural significance. I was lucky enough to speak to him privately after the event.

The Tab: 'You were talking about the difficulties that you faced with convincing the Australian government of the importance of your campaign. I was wondering if you'd come across any resistance more generally from the Australian public?'

Kelly: ‘Most of the responses have been good, but I have been getting responses that they belong here. People from different backgrounds come out and say those kind of things. They are a minority but there are people out there who think like that. And I’m okay with that. No matter what, people are gonna have different views, so it’s just a small minority … It doesn’t worry me at all that there are still people that think like that. They just need to learn more about what repatriation is and have a better understanding in order to not come to the conclusion that something that is taken belongs to the person who took it. That’s just how Australia is, it’s a very, very racist place. We’re the worst of it all. I just don’t let it affect me.’

Kelly: ‘You know, at the start I had all the optimism. I thought that it was the right thing to do and that there’d be many people out there thinking the same. I just thought it was a clear cut case of returning the artefacts, but I was so wrong. Once I got into it, things just started going against [the campaign]. It did get me down a lot. I’ve had times where it’s gotten the best of me and I’ve never wanted to come back, but then something positive will happen. Someone will email me, or a politician will want to talk or something like that, and that gives me the energy to do more. Every time I come here, I’m always happy to talk to people but I always go home disappointed, and sad. Because I really want these artefacts to come home, it’s the right thing to do, but nobody seems to care.’ 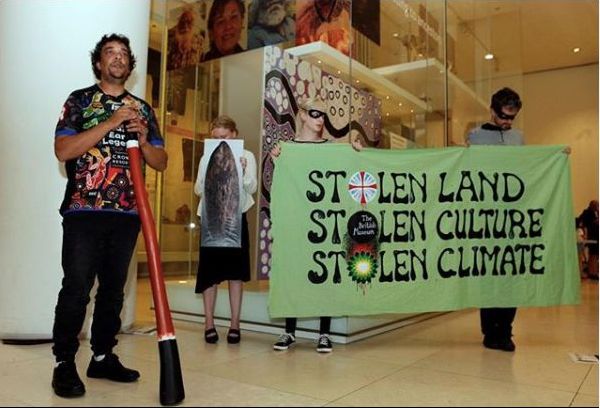 Kelly at the British Museum in 2017. Image from @collageadelaide

The Tab: Do you feel like it’s improving every time you come or staying at the same level?

Kelly: Yeah it’s improving. At first, they didn’t wanna know who I was, wouldn’t let me see the artefacts in person and hold them. They wouldn’t come to the table at all and talk about it. But as I kept coming back, the Director started wanting to see me every time I came back. That helps out so much.

The Tab: On the Trinity board, was there a difference of opinion – were some more sympathetic – or were they all just following the same line?

Kelly: No I think they just all follow the same line. Nick Thomas, he’s the main instigator. He writes books on Cook, he writes all this history on Cook.

The Tab: So you think he’s got his own personal agenda?

Kelly: Yeah, he's made so much money off Cook. He does lectures about me now. In his lectures, he’s always bringing me up, he’s got a picture of me in his lecture. I felt like being mean to him and being angry with him, but I’m never angry. I keep it civil.

The Tab: Do you feel like you carry this all yourself? You have more and more allies springing up in different places, but are there people from your own people who are fighting with you for the same cause?

Kelly: No, I’ve been alone. People support it. But we’ve got a shyness about us, we’re still a very oppressed people. We’re at the bottom of the scale. So many things are against us. A lot of people are too shy to stand up. Lots of people won’t get up and talk. It’s very hard because it’s always myself. I understand that if I do this I'm encouraging other people to stand up after me. People start to do that now, I’m getting the cousins to stand up. It’s all about that shyness in us. It’s only a very small collective that are out there every day, doing this kind of work. It's just hard for the people to stand up but hopefully I can show them from what I’m doing that they can stand up as well.

The Tab: How confident are you that the next generations will continue to strive in this kind of struggle?

Kelly: The spears I'm fighting for are just the tip of the iceberg. There are thousands upon thousands of artefacts still in museums here, so my fight’s gonna progress and it’s never gonna stop because there’s so much that was taken from us.

The Tab: It must be so frustrating to have all these talks when there never seems to be very much effort from the other side. Do you feel like there needs at some point to be a higher level of action taken? Are there any other methods you would consider?

Kelly: No, I’ve thought about getting angry, doing something to bring attention to the situation, no doubt it’d be illegal. But I’m thinking about the next generation as well. What I do will affect those who come after me, I don’t wanna do that. That’s why I can talk to them, or the director, because I know there will be people behind me and I’ve got to allow them that platform to work off. There’s gotta be other ways to do this. That’s what these lectures are all about, getting people to ask those questions. I’d like to go hard, angry, be that activist, but I know I never can because it’s not just about me. It’s not even just about my people, my people’s own artefacts, this is all indigenous people, we’ve all got things that have been taken from us. We’ve always got to be thinking about that next generation so they’ve got a platform to continue. Without them coming behind me, a lot of my time is wasted. I know if I get violent, angry, do something that brings attention, it will just cause problems. It’s not about me, it’s about everybody, I’m trying to help everybody, and that’s the main motivation that I have. That’s what keeps me going, knowing that there will be someone behind me, and what I do now will help their campaigns.

A protest was held outside Trinity College at 12pm this Sunday which Kelly encouraged members of the public to attend. On the 4th May he and others will conduct a stolen goods tour at the British Museum between 2-4pm. A short film produced by the campaign will also soon be available.