During the debate, Melliar-Smith cited her own experience as a 'low-income woman' from the North-East, who has experience with applying to Cambridge from a state school, and using bursaries, as a highlight of her candidacy. She highlighted her experiences with regionalism and classicism, considering that some academics can 'understand Nietzche but not a North-Western Accent'.

Ahmed did not emphasise his educational backgound during the procedings, but did state that he had 'the professional and personal experience' to bring to the role.

Later, Ahmed took to Facebook to respond to his opponent's comments: 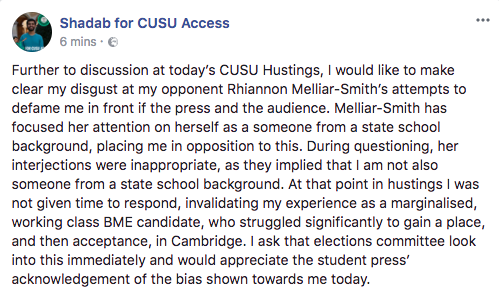 Speaking exclusively to The Tab, Ahmed told us:

"I went to a state school until the age of 16, where 32% of students in my year passed the Level 2 Threshold. After that, I was offered a full bursary and scholarship to pay for my education. This mirrors my situation here, where I am only at Cambridge because I receive the full Cambridge bursary, rent rebates and additional support from the Welsh government, amounting to over £14,000 per year."

When contacted for comment, Melliar-Smith said she had already 'put statements out on my Facebook that you are more than welcome to use'. In those statements, Melliar-Smith posted that the claims that she is 'the only candidate with personal experience of applying from a state school is absolute true and not defamatory in any way. A statement of face is not the same thing as a derogatory statement.' 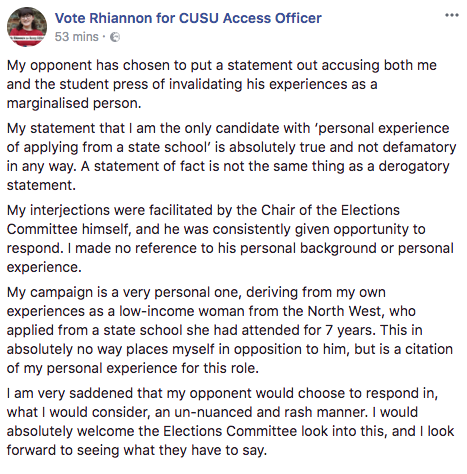 She offered a further update later, adding 'Pitting marginalised groups against each other is not what I believe makes for good access politics'.

To keep updated with the campaigning, remember to follow the Tab's liveblog here!