The Tab’s Guide to Pre-drinking

Pre-drinking can be a minefield of social etiquette, but we’re here to help you through it all.

It’s your first night of Freshers Week and you’ve tentatively emerged from your room, armed with whatever booze Sainsburys had on special that morning. You knock on the door of whoever took one for the team and hosted pre-drinks. Small talk is being attempted and so you join in. “Hey, it’s Jack isn’t it? No…Rob? Haha sorry, I’m from the north and you’re from the south haha….ha.”. At this point you realise that if you ever want to achieve social cohesion, you all need to get fucked. So here are some drinking games to help you through your first pre-drinks and beyond.

Requires: A pack of cards, a spare glass, a lot of patience

The classic and stalwart of any solid pre-drinks. But as soon as the cards are laid out the inevitable argument will break out about the rules. Someone pipes up about “breaking the circle”. Then rhyme is muddled with categories and the one person who is still trying against all odds to make small talk keeps missing their go. Never mind, soldier on. You may even get to down the dirty pint, after all, free booze is good booze. 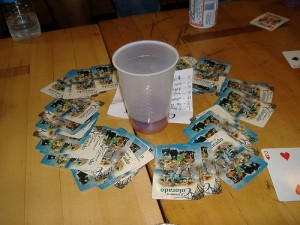 If you really want to break down any and all barriers with your flatmates, this is for you. However, you soon discover that a middle-class upbringing in suburbia doesn’t lend itself to exciting stories. As others rattle off quality, eyebrow-raising self-nominations, you realise the need to be a bit liberal with the truth if you want to impress. 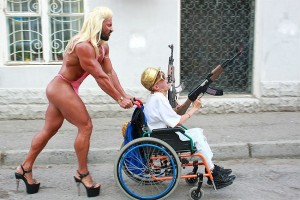 Requires: a spare glass, a coin, a strong stomach

A simple game that can be played without even having to speak with your peers. Pour some of your drink into a communal glass. Then flip a coin and call it, if you’re right then pass the grenade posing as a glass on. If not then you know the drill, down it, fresher.

Brutally efficient, ideal if pre-drinks has started late and someone is whinging about missing the cut-off for queue jump. Probably the same person who will then refuse to down the concoction of Fosters, Sainsburys House Soave and cheap Green Mark vodka. 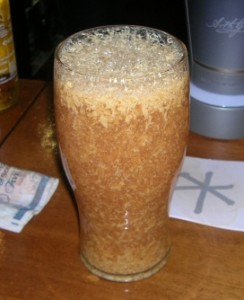 What do you mean I won’t?

Requires: lads, a yearning desire to be considered one

One of the LADS has been on their first sports social. They had to suffer and pretend to like it, so surely their flatmates have to go through the same. Seems fair. You enquire about the rules only to be told “no coaching”. You begin to wonder if “international drinking rules” are actually decided by the U.N. Just keep saying numbers and hope for the best, he’ll probably get shouted down eventually.

Requires: a pack of cards, desperation, undying desire to get wankered

None of your flatmates have ever really drunk before. They think “Ring of Fire” is a geographical feature and their wildest “Never Have I Ever” is getting a detention once in year 7. This is your absolute last resort. Embarrassingly simple, it’s barely a game. If your flatmates can’t grasp this one then there is no hope. Buy a load of VKs in the club and try to ignore the crushing sense of anti-climax occupying the night.

You won’t go crazy, I promise

Maybe one day you will be able to have meaningful conversation with your new friends, but for now this list is your best bet.