In news even less surprising than the failure of Edstone, the exclusive Coningsby Club is giving Cambridge University Conservative Association members privileged access to their mysterious meetings.

Victoria Brown, CUCA chairman, wrote in an email that the “Coningsby
Club is one of the best ways to keep in touch with CUCA, as well as
offering networking opportunities”.

The “privileged invitation” to join the Club said “the Coningsby Club provides a forum for Oxbridge conservatives to meet and network and have the opportunity to listen to prominent figures in public life”.

James Sharpe, the club’s chairman, offered “members of CUCA the chance to join without the need to pay until 2016”. 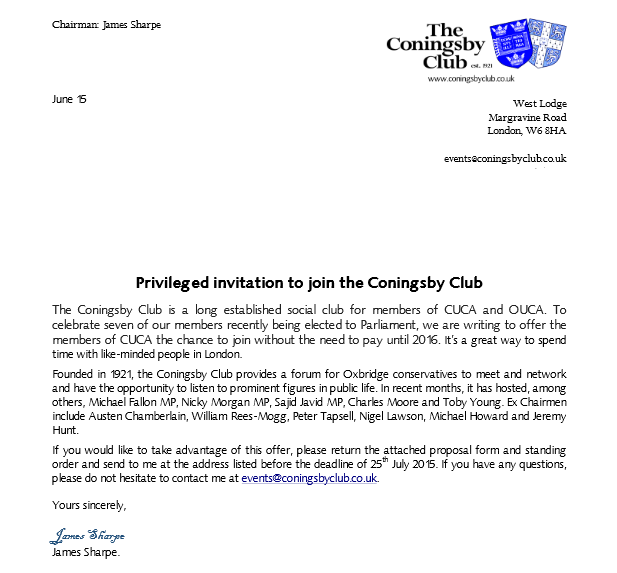 The secretive club was founded in 1921. Rab Butler, who was president for many years, suggested the Conservative Party should look to the club to “provide a good part of our future political elite, if I may still venture to use such a word in the so-called Century of the Common Man”. After retiring from politics, Butler became Master of Trinity College.

The website for the exclusive dining society says that “nearly every nationally known Oxford and Cambridge Conservative politician went on to the Coningsby Club after OUCA or CUCA so you will be in good company”, but that membership was “by invitation only”.

The Coningsby Club’s website said nothing about dress code

Recent events include a dinner with Work and Pensions Secretary Iain Duncan Smith on the 13th of July.

When asked for comment, Rory Weal of the Cambridge Universities Labour Club told The Tab that “CUCA’s impressive attempts at self-parody have reached new levels. Satire is dead”.

A statement provided subsequently by CUCA told The Tab that “the Coningsby Club is available to all members of CUCA, and is designed to maintain alumni relations between members and those of OUCA, providing an excellent platform for networking and socialising events after graduation”.