Logistical issues do not stop this ball from being a great way to conclude the term for LEYLA LESNIAREK-HAMID and CHLOE COLEMAN. 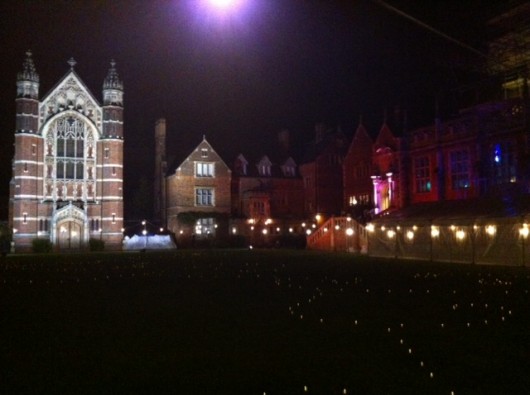 Get queuing early to get the most out of Selwyn Snowball. Either way, if you’re not in the VIP queue and you want to be close enough to see the college, you have at least an hour ahead of you. On that note, wrap up warm. This ball was really good fun, but having been wizened by our experiences last year, you have to formulate a battle plan to get all you want done.

Despite it being a very cold evening, shivering queuers were supplied with mulled cider and mince pies to kick off the festivities early. Once it started moving, good organization meant that people were ushered in quickly and efficiently. Our position in the queue meant that we could check out the various attractions, namely an interactive photo booth and an intriguingly creepy wax hand maker.

On the whole the range of entertainment on offer was great. Amber Run was particularly impressive, and warmed up the crowd early on in the night. The main hall was always filled with a variety of music, and Itchy Feet was a fab way to end the evening dancing off a copious amount of food. The silent disco was, as always, a winner; although understandably this is another one you needed to get to pretty much when it opened. Karaoke and the Cambridge massage society were also delights to be sampled.

Drinks were available in pretty much every room and, as far as we’re aware, kept flowing all night. However, though there was a variety of food advertised on the programme, it was all staggered, which meant that when you first arrive starving and cold the only thing on offer is chips. Chicken Dijonaise and Ratatouille became available later on, but gnawing on a chicken drumstick was maybe not the most practical in a ball gown. Perhaps it would have been better to have more food at the start.

The French food formed a major part of Le Chat Noir theme, which on the whole was well executed. Cabaret, dancing, drag and the frog legs stall all fell neatly into the array, and it was generally a successful choice for a winter ball. Because only roughly half of the college was used, every space was transformed into turn-of-the-century Paris. However, there were some issues with logistics. The committee had decided to implement a one way system, which we could recognize as a necessary evil when it comes to queues etcetera. But having the main hall as a thoroughfare just didn’t work, and resulted in sidling along the wall to avoid throngs of dancers. Bizarrely, at one point we were kept on the stairs outside and told that the space was ‘at capacity’, only to find the hall half empty when we got in. Perhaps a one way system would have worked better at a May Ball, where it’s a) busier, and b) warmer.

Nevertheless, Selwyn Snowball was a great way to end the term. The atmosphere was buoyant, and good entertainment was spurred on by copious amounts of alcohol. There may have been some logistical issues, but hopefully these could be easily resolved. We look forward to seeing what the Snowball has to offer next year.