MAHDI TAQI is reintroduced to the arts, culminating in seeing his first play – and thinks more sceptical science students could benefit from doing the same.

He seems to think he’s Morpheus. In fact, he’s a cross between a bumbling P.G. Wodehouse character and a highly decorated cub scout. I am referring of course to Tab Theatre Editor and ADC curtain puller understudy, James ‘the Macattack’ Macnamara.

A few months ago, he approached me with a proposition. He said he wanted to free my mind. The general population might have recoiled at such an offer, sensing the imminent ravings of a bible bashing lunatic (or in this case A Victorian Gentleman’s Approach to Reciting 15th Century Poetry bashing lunatic). But not me. This time I indulged that part of me that is still a curious student, and, like a hippy, it tends to trip and fall spliffs first for such intriguing propositions.

Expecting a red pill, I was instead told that I would be his +1 for the play he’d be seeing that night at the ADC. In the past, I would have immediately turned down such an offer. I’m a science student and, like many science students in Cambridge, I had a preference for my free time to be spent as mindlessly and effortlessly as possible. As such, If I felt like watching a tragedy, rather than trying to understand Shakespearian gibberish, It would be easier for me to look out the window and await a flock of Abercrombie & Fitch wearing couples bound for Cindies.

However, things had changed. Last year I was forced to degrade and on returning home, I suddenly found myself with nothing to do. My Cambridge leisure activities of internet nothingness, while great for the first couple of days, eventually became mind numbing. What’s more, on attempting to reintegrate with the normal population, I came to realise that my personality had begun to reflect the vacuousness of my free time.

You see, Cambridge can wear you down. Work can turn you from a cultured, continental breakfast eating eclectic to a raw Weetabix eating subject specific sniper. Deadly, like a Caius Hall bread baton and straight to the point like Terminator. If John Connor was my Tripos exam, he would be dead in a body bag made from his mother’s skin.

This attitude will serve you well for exams, but sometimes it’s necessary to acknowledge that there are other things worth knowing, and there isn’t all that much time to find them out. Reflecting on my situation, I felt compelled to culturally re-educate myself. I started reading fiction again, and soon I was back into the arts: smirking at Dostoevsky’s dark humour, pondering like Dorian Gray over Lord Henry’s musings, and chuckling at Catch 22’s unconventional dialogue. I’d genuinely forgotten how refreshing it was to allow my imagination to embrace another’s and the importance such personal interpretations have in shaping our way of thinking and our sense of humour. I felt like how Arnold Schwatzernegger might feel if he miraculously turned human, or Keanu Reeves if he could suddenly express a feeling other than ‘sad’. 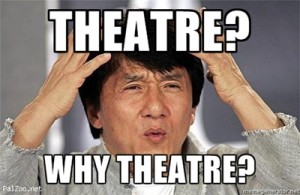 Because it’s great, Jackie. That’s why.

Consequently, on my return to Cambridge, I made the firm intention to spend more of my free time embracing the arts and feeding my reinvigorated imagination. So when James offered me the plus one at the start of Michaelmas, I agreed to go.

He told me we were seeing Anthony and Cleopatra. What he didn’t tell me was that it was 3 hours long and had no subtitles. Initially I had no clue what was going on and began to regret coming, but like a dim-witted Columbo, I slowly started to piece together the plot and found myself immersed in Shakespeare’s story telling.

I was as engaged as I might have been at the cinema, but watching a story unfold on stage had something else. It wasn’t tainted by special effects or heavily formulaic in its goals towards ‘entertainment’. Instead, it focused on developing deep characterisation – a feat achieved by Shakespeare’s writing and the excellent student cast. One might argue that this could also be achieved on the big screen, but I would disagree. In my opinion, theatre provides a medium from which emotions are palpable, making the characters more real and the story more intense.

I’ve seen a few more plays since this one and while some were good and others were bad, I walked out of each one with an idea or a character that left a lasting impression on me. This is more than I can say for television or cinema, as for the most part, the only impression left behind was a transient one: namely, that of my arse on a seat.

So guys, if this misanthropic philistine can get all teary eyed over Shakespeare, perhaps you can too. The Macattack.