During my second semester at Queen's University Belfast I took a call centre job within the university. I was told that the proceeds from my work would go towards schemes such as the "Mind Your Mood" campaign, a programme offering free mental health awareness workshops to students and staff.

The student-led programme organises workshops of two to three hours, that are “designed to help you look after your mental health and spot the warning signs of depression or suicide in others”.

We will be at the library from 10-12pm on the 24th& 25th of April and on the 7th& 9th of May, giving out free goodies from our self-care box and tea! We've got your back during exam season ^_^ pic.twitter.com/pgkFs43ntS

My blood ran cold as I remembered the position I had been in only months before: a bad relationship, a new city, crushing self-doubt, and in a gaping black hole of icy loneliness. The lowest I had ever felt. Through it all, I was completely unaware that the university offered any sort of mental health services whatsoever, and I felt utterly let down.

Whilst being an undoubtedly successful scheme, entering its sixth year, as well as using healthcare professionals to build its programme, these sporadic workshops cannot possibly be expected to cater to the issues of an entire student body here at Queen’s. 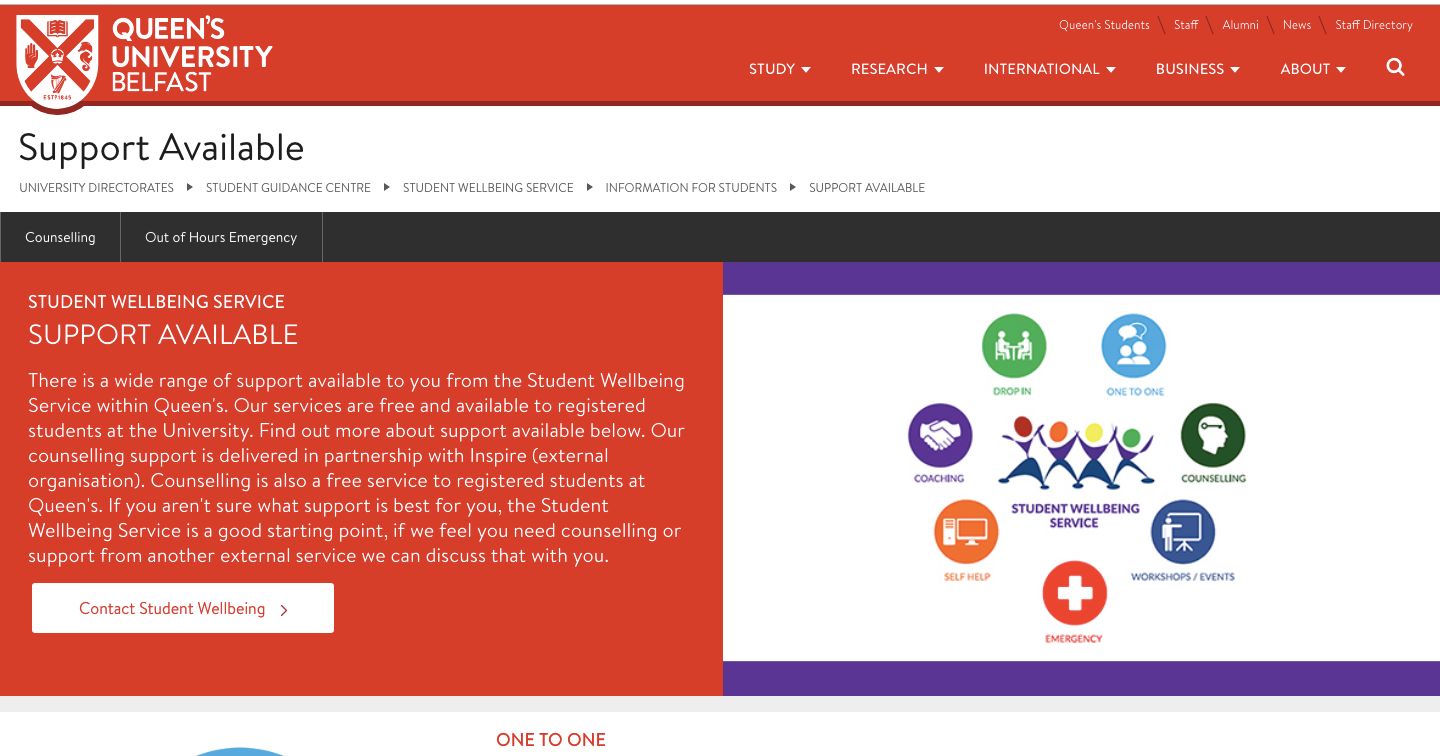 One student told The Belfast Tab that he tried to access the student wellbeing services to enquire about counselling, but gave up in his pursuit as the service took so long to reply to his form even though the website states they will reply "as soon as possible".

The student commented: “I wasn’t awful or anything, just low, but I felt more annoyed that if someone was actually desperate they would be mucked around”.

Another student said that she went outside of the university for help, as she had heard reports that the student wellbeing service was “unreliable and not very accessible”. She contacted another organisation, but only received a reply after months of “persistent emailing”, before finally disclosing that she was feeling suicidal.

We need funding put back in to mental health services. We should be able to spend more than 10 minutes talking with a doc, if I do get an appointment. We shouldn't have to wait 6-12 months for CBT/therapy. Mindfulness feels futile when you're suicidal & it won't heal my trauma. https://t.co/JMqnQkeV8h

In an article published in The Telegraph last April, which revealed student suicide rates have “risen 56 per cent” between 2007 and 2016, it is stated that “universities do have a suicide problem”.

Why then is more not being done to promote awareness of these essential services at QUB? Why is access to them buried deep in a hard-to-navigate website? And why are so students reporting negative experiences with these services? Through its "Student Wellbeing Strategy 2017-2021" Queen's told The Belfast Tab that it offers students a "diverse range of supports" which includes "psycho-education workshops", a "drop-in facility", "practical one on one intervention" as well as "short-term focused counselling".

Please RT to ask @professorgreen to join us as a QUB #MentalHealth Professor for the day.

Despite spending £19 per student on metal health services (the fourth highest expenditure in the UK and much higher than many universities), QUB placed ninth overall in The Tab's 2017 Mental Health Rankings and 39th in the mental health satisfaction ratings.

It is clear then that the amount of money being spent is immaterial if it is not being spent in the right way and producing satisfaction amongst students. Nonetheless, Queen's says it is "committed to supporting students to proactively manage their mental health and wellbeing".

Following the university's strike action earlier this year, a letter from the acting Vice-Chancellor James McElnay and SU President Stephen McCrystall outlined where the university would be spending the money it deducted from striking staff.

These include paying for additional staff in the Students' Union advice service, which gives financial, educational, accommodation and health and wellbeing advice.

"Funding will also be provided to deliver a campaign aimed at supporting mental health, challenging negative stigmas and encouraging greater discussions around the issue," the letter continued.

However, the letter failed to outline how much money will be spent on these services and students are yet to see any changes.

A spokesperson for Queen's told The Belfast Tab it "recognises the importance of creating a positive environment that enables staff and students to achieve their full potential".

For anyone affected by this story or seeking help, information about the universities counselling and well-being services can be found on their website.

You can also contact Lifeline for confidential support and information, a free service available 24 hours a day to people in Northern Ireland. Click here to find out more about contacting Lifeline.

Alternatively the Samaritans can be contacted on 116 123.