Who knew so many memes originate from stories of crime?! It’s a dark dark world we live in, and not even the memes are sacred. Be prepared because the following meme origins are about to blow your mind.

Disaster girl was a popular meme in 2011, but the picture was actually taken in 2004. It showed a girl looking quite evil as everything burns behind her.

The photo was taken by the girl’s dad, Dave Roth. The photo is from the local fire department’s live drill training in Mebane, North Carolina. While watching the fire training unfold, Dave snapped his daughter Zoe grinning with the disaster scene behind her.

The woman yelling at cat meme origin story is probably the darkest yet. The angry yelling woman picture comes from season two of Real Housewives of Beverly Hills, when Taylor Armstrong had a very heated row with fellow cast member, Camille Grammer.

Taylor had just told her friends about her late husband allegedly abusing her. Camille was then filmed gossiping with other cast members about it, which reportedly made Taylor worried what her current husband would think. This sparked a HUGE row.

The cat in the meme is Smudge, the table cat. Smudge first went viral when the picture of him sat and the table captioned: “he no like vegetables” was posted on Tumblr.

Tough guy entering a room is actually a criminal who took part in the 2015 Paris terrorist attacks. The subject of the meme is called Jawad Bendaoud, and the viral clips show him walking into the Paris Court of Appeal after being accused of harbouring terrorists Abdelhamid Abaaoud and Chakib Akrouh. The two men were on the run after their involvement in the attacks.

Jawad Bendaoud was acquitted but then convicted after an appeal and sentenced to four years.

Bendaoud’s criminal history goes even further back, too. He also is reportedly a drug dealer and murdered his best friend after accusing him off stealing his phone.

Imagine how tired we are

The imagine how tired we are meme is a clip of an interview with Rose McGowan. In the video she is discussing the arrest of Harvey Weinstein.

Girl looking up and down

You have definitely seen the girl looking up and down meme:

How the bouncer look at you when you give him your ID pic.twitter.com/FAlCl7TSqU

But it’s not just an off-the-cuff video. The girl in the video is a certified meme queen. Her name is Kayla Nicole Jones, or NicoleTV, and she’s known for being the face of memes and relatable content. She’s gone viral countless times.

People getting up and rushing

The video which shows people suddenly getting up from a desk is from 2013. The meeting was actually between a local neighbourhood watch group, and they all rush to get up as the news comes in of their first crime to solve. Who’d have thought?!

Me explaining to my mum

The picture on the left is YouTuber Quenlin Blackwell in a screenshot from a video she posted to Twitter in 2018 with the caption: “Sometimes you just have to let it out..scream if you have to.” Here’s the original video:

”sometimes you just have to let it out..scream if you have to” pic.twitter.com/w1F15yQ3e0

On the right is a photo of Ms. Juicy, who appears on Little Women: Atlanta. She posted the picture on Instagram when she was watching a football game.

It was another year later when the pictures were first posted together. And now, the meme won’t stop. It’s constantly used to portray when you scream something at someone and they just don’t get it.

My dad is 45, pursuing a modeling career, and I’ve never seen him happier. He told me he’s just waiting for a chance to blow up. So, Twitter, meet my dad. pic.twitter.com/zYSmZGbPCn

You may have seen on Twitter people posting photos of their “dads” captioned with: “My dad is however old, pursuing a modelling career, and I’ve never seen him happier. He told me he’s just waiting for a chance to blow up. So, Twitter, meet my dad.”

The origin of the Twitter meet my dad meme at first seemed very cute. It appeared to have all started when someone’s son genuinely tried to give his aspiring model dad a break through Twitter. That son is Collin Hayslett and his dad, Clint Hayslett, is a very hot dad. He then broke all of our hearts when he revealed it was all an April Fool’s prank.

some baby yoda heart reacts I made pic.twitter.com/zXP74mVdqW

Baby Yoda is from the live action-fiction series, Star Wars: The Mandalorian on Disney +. It’s an unnamed character which is introduced in the first episode. It just happens to look like an infant version of Yoda.

landlord: just a reminder your rent was due last week

me: hey! i’m so glad you reached out. i’m actually at capacity / helping someone else who’s in crisis / dealing with some personal stuff right now, and don’t think i can hold appropriate space for you. could we connect [later

The I’m at capacity meme started as an innocent message exchange between two friends. Writer Melissa Fabello posted a thread on Twitter about establishing boundaries with your friends when asking for their emotional support.

She said that instead of straight up venting, a friend had sent her a message asking if she had the emotional capacity to listen to their issues first. The message read: “Do you have the emotional/mental capacity for me to vent about something medical/weight-related for a few minutes?”

Next thing the I’m at capacity meme became a copy and paste template for how you can tell someone you don’t have the time or mental capacity to offer them support.

Did you ever wonder why for a day or two everyone on Twitter was talking about 30-50 feral hogs? The origin of this meme was one tweet that sent the world crazy.

It started off the back of a tweet about the tragic mass shootings in the US. Jason Isbell tweeted saying: “If you’re on here arguing the definition of ‘assault weapon’ today you are part of the problem. You know what an assault weapon is, and you know you don’t need one.”

The tweet got a lot of responses. It began a huge argument over gun ownership in the US. But one response in particular got everyone talking. William McNabb said: “Legit question for rural Americans – How do I kill the 30-50 feral hogs that run into my yard within 3-5 mins while my small kids play?”

Twitter went absolutely feral for it themselves, and everyone was talking about 30-50 hogs. Obviously.

They did surgery on a grape 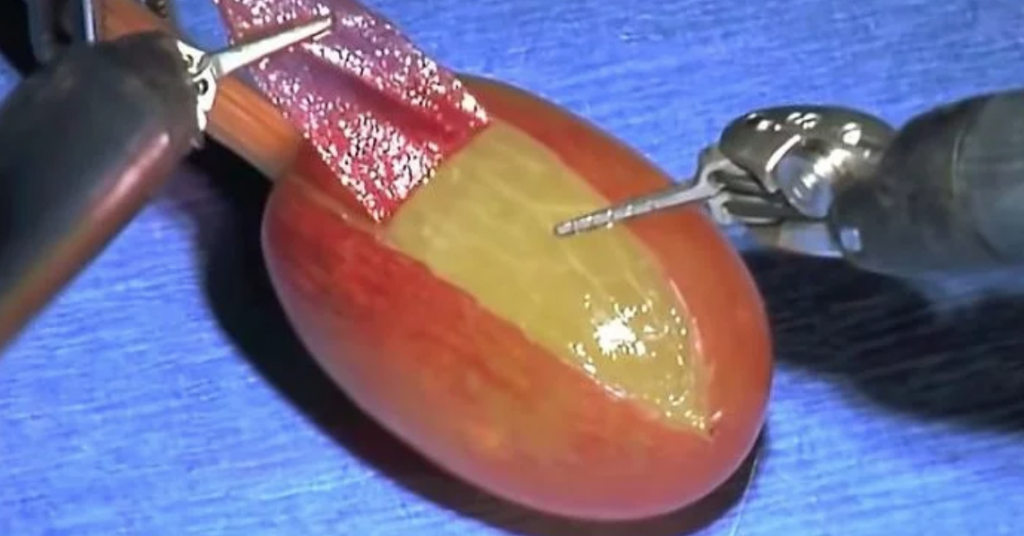 Remember a year ago when everyone was sharing a picture of a grape having surgery and we all lost our minds a bit?

The picture actually came from a YouTube video posted in 2010, in which surgeons at Edward Hospital in Naperville, Illinois practised using surgical equipment on yep, a grape. The surgery video was to show how the Da Vinci Xi robot works, performing precision surgery.

The £1.6million robot is used by doctors for less invasive surgery. It works remotely and its movements are controlled by a surgeon. It has been effectively used to help those with ovarian, uterine and cervical cancer.

So yes – they actually did surgery on a grape!!!

Concerned man on the phone

Concerned man on the phone is actually the former Republican congressional primary candidate, Martin Baker. He was photographed on his phone during an event in 2014.

According to Know Your Meme, The Guardian published an article about protesters in St. Louis, Missouri who came out in support of Darren Wilson, the police officer who fatally shot teenager Michael Brown earlier that month. The article referred to a man named Martin Baker as the sole black member of the crowd.

Overly attached girlfriend became a meme in 2012 when a girl posted a webcam video of her singing Boyfriend by Justin Bieber with her own lyrics. It’s creepy. Watch the original video here:

Wow, that was a rollercoaster.

• The votes are in: This is officially the best meme of the entire decade

• These are the 28 best woman yelling at cat memes ever

Which Love Island boy would you couple up with? Take this quiz to find out