These are the biggest exam disasters of 2019

York students were given the wrong exam paper TWICE

It seems like every year, every single uni manages to fuck up SOMETHING.

Whether it's Student Union presidents going off the rails or enormous Vice-Chancellors' expense claims, something always goes wrong.

But every year, it seems exams manage to get messed up more than anything else. From noisy exam disruptions and wrong question papers to allegations of racism, this year universities seem to have had everything covered.

Here are the biggest university exam fuck ups of this year, ranked:

13. UCL exams were disrupted by noise from a car show

UCL students took exams at the ExCel centre, just metres from the London Motor and Tech Show. The students taking exams while the show was going on could hear loud tyre screeches and engines revving.

One student told The London Tab "it was the worst exam" she had ever taken and the noise just "added to what was an already bad day." Apparently the whole place smelt like burnt rubber, which students called "nauseating and disgusting".

For students at Durham University, drilling was "all you could hear" during exams, Durham's Palatinate student newspaper reported.

Ongoing building work continued during exam time, at a building that was also being used as an exam venue. Not good.

11. Bristol emailed students saying their exam was on the wrong day

The University of Bristol's English admin team sent an email, wrongly telling students their exam was "tomorrow", four days earlier than it actually was.

One student said: "The English department is as useless as the degree itself." 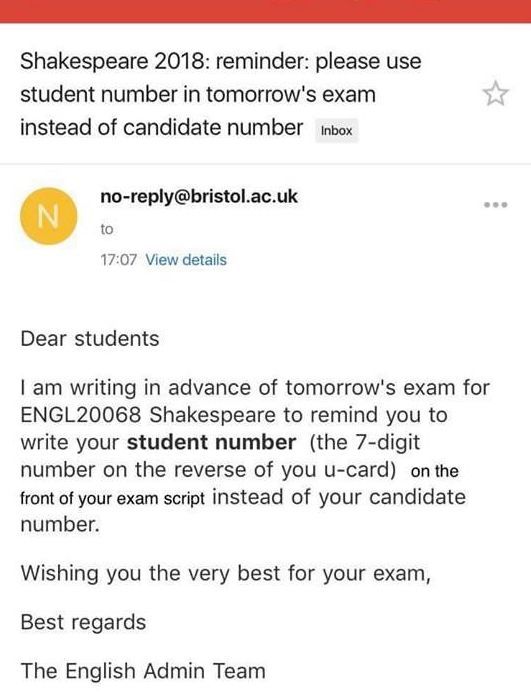 Bristol also handed out bubble wrap to students to try and combat exam stress. Students were given portioned-out squares of bubble wrap, each apparently with no more than 16 squares. How generous of them.

The University of Manchester's School of Arts, Languages and Cultures sent an email saying those who owe the University money would not have their exam results released. Anyone with unpaid fines, university halls of residence debt or tuition fee debt would be unable to see their results.

Students were also given a small window in which they would be able to get advice and feedback on their results. Those who were unable to pay their debt before the deadline would then miss out on this opportunity for exam feedback. 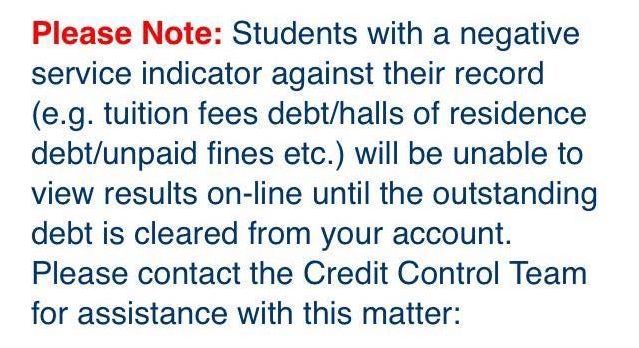 In May, Cardiff University's student support services said they couldn't take on any new students for counselling or wellbeing appointments until the end of exams, as the demand for appointments couldn't be met.

Cardiff Students' Union President posted on Facebook saying student support services couldn't take on new students because of an "unprecedented 25 per cent increase in the number of students requesting ‘crisis support’ through the services'".

Students were told they could use self-help resources or attend group workshops on exam stress instead of accessing counselling services.

Sabbatical Officers were also giving away free tea and coffee during the exam period, which of course is super helpful and definitely a substitute for one-to-one counselling. Just "relax =)", guys!!!

We're at Main Building today with #RevisionAid! Come along to grab a free cup of tea, coffee or hot chocolate, or take a moment to relax with one of our virtual reality wellbeing sessions ☕️ ? ? pic.twitter.com/bdpDUD7Rqy

University of Manchester Economics students were told their exam had been rescheduled, and students had to choose which of two new dates to sit it.

The exam was originally scheduled for 31st May, and an email said they could choose to take it on either 13th May, almost three weeks earlier, or 28th May. The two dates had different exam papers.

A student told The Manchester Tab: "This puts enormous mental strain on all of us." 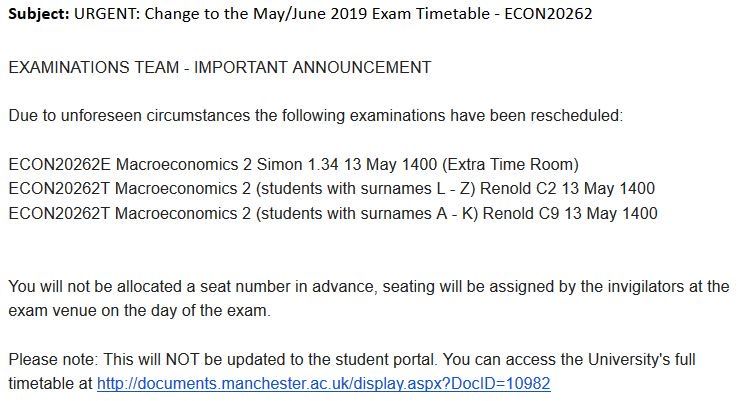 7. Warwick had an exam timetable disaster

Warwick University published a provisional exam timetable at the end of March, which then had to be withdrawn as exams were scheduled incorrectly.

They finally published the full exam timetable almost a MONTH later, and students' exam dates had been massively changed. Apparently, only 47 out of 729 exams were actually the same date as the provisional timetable had suggested.

One student's exam was moved to be an entire month earlier, meaning four whole weeks' less revision time. People were not happy.

so warwick are releasing their exam timetable now, and i’m finding out that my first exam is in less than a month? with no revision done? loooool pic.twitter.com/tVEyNxWbFo

Warwick moves my exam from the 15th of June to the 15th of May and i’ve still got 3 essays to do 🙂 pic.twitter.com/IoFp0xTUVI

6. Liverpool were accused of racism

The University of Liverpool sent a reminder email about exam rules and regulations. The email, sent to all international students by the International Advice and Guidance office, only translated the word "cheating" into Chinese.

Liverpool said they were not accusing Chinese students of cheating, but said: "We have had feedback from Chinese students regarding the terminology so [we] were addressing this to ensure our advise was clear."

People weren't happy, though, and called it "racism" and "discrimination".

Is cheating a complex word for us? Maybe discrimination is much more than that.

5. Cambridge exams were FULL of mistakes

University of Cambridge History students were given the wrong exam. The question about Empire was allegedly changed to a question on Nationalism DURING the exam.

Students were given an extra 10 minutes to compensate, but said the mistake was unfair on those who had already started answering the "wrong" question originally given to them.

A Cambridge first year spotted a mistake in an International Law paper, and then had to tell the invigilators. The exam was stopped halfway through to tell the students about the mix-up.

There was also a mistake in a Cambridge French Literature exam, where a wrongly printed word apparently completely changed the meaning of the poem students were meant to write about.

The University of Bristol's Epigram student newspaper reported first years studying Psychology were given the wrong exam question. There were also mistakes in a multiple-choice exam for the same module.

One student said: "I know that my grade will be severely compromised."

I’m not paying 9k a year to study hard af only for it to not pay off because they don’t check their papers before they give them to us. It’s only first year but if this were to happen in 2nd or 3rd year that’s actually impacting our degrees so @BristolUni sort it out!!!!

According to The Gazette, Business Management students at the University of Essex were given the exam paper from the year before. The students were told to stop writing, and it was decided the exam would be cancelled and rescheduled.

Brilliant work from @Uni_of_Essex gave us the wrong exam paper. Weeks of studying and stress down the drain @bbceducation

2. Soton third years were given the wrong exam paper

Third year Criminology students were given the wrong exam paper at the University of Southampton. The department sent an email, claiming they had "no idea" how the mishap occurred, and said they would investigate the issue.

The "wrong" questions combined two topics, so many students hadn't revised enough to be able to answer the essays.

1. York students were given the wrong exam paper TWICE

According to York's Nouse student publication, second year Law students at the University were given an exam paper meant for a different day. After the mistake was realised, the wrong exam papers were collected and the correct ones given out – but half the students were given the wrong paper again.

The invigilators made everyone check their exam papers to make sure they were correct, but this meant those with the right paper got a sneaky look at the exam questions before everyone else.

Invigilators also gave those in the exam an unsupervised break, and apparently people who had seen the questions were talking about them with each other. Allegedly, some even got out their notes and mobile phones to do research.

• Criminology third years were given the wrong exam paper