Southampton SU president, Emily Dawes, is now "on leave until further notice" after saying she wanted to "paint over" a campus war memorial. She has faced a barrage of online abuse including death threats and pictures posted online claiming to be her nudes.

Steve Gore, VP Sports at Southampton Students' Union, said Emily Dawes "is on leave until further notice" and therefore "will not be reachable for correspondence or for her day to day duties." The post he made on Facebook announcing this has since been deleted.

Many have called on Southampton's Students' Union to sack Emily, who publicly apologised yesterday, with a petition calling for her to resign receiving over 10,000 signatures.

The Soton Tab understands Soton SU (SUSU) has received hate mail and a number of poppies in the post in response to Dawes' actions.

The Senate room, which houses the mural, has also been locked due to the ongoing situation, a university staff member told The Soton Tab.

A picture has been posted online which claims to be a nude photo of Emily Dawes, however this is unconfirmed.

The Soton Tab have also been told by student SU employees that they have been warned not to wear their SU uniforms in public as it may pose a risk to their safety.

Student SU employees have said they've been told they are not allowed to speak to anyone about the ongoing situation. Societies affiliated with the university have also been asked to refrain from commenting on social media – messages from society secretaries were sent through their group chats.

Many people have also been shocked at Evie Reilly's (Vice-President of Democracy and Creative Industries) reply to Emily's tweet which said "I'll bring my paint brush". 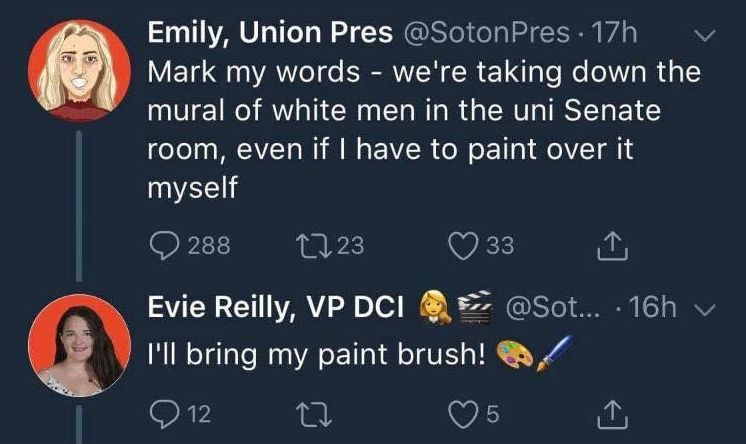 Some people feel Evie should also lose her job for agreeing with Emily. One tweet argued "she shouldn't be representing anything either!".

Dawes' Facebook has been flooded with abuse, calling her an "absolute disgrace", and an "ugly tramp". Others have sent death threats, asking her to "please die", with one user commenting "Emily Dawes wants fucking killing".

The Rothenstein Mural represents all students who served and sacrificed their lives during the War, never getting to finish their degrees. Emily's now deleted tweet, which sparked the controversy, read: "Mark my words – we're taking down the mural of white men in the uni Senate room, even if I have to paint over it myself."