The university have since issued an apology

The University of Liverpool have apologised after a "racist" email about exam rules only provided a Chinese translation of the word "cheating", saying Chinese students are usually unfamiliar with it.

The email read: "We find that our Chinese students are usually unfamiliar with the word 'cheating' in English and we therefore provide this translation: 舞弊".

With January exams looming, the University of Liverpool sent out this email to remind students of exam regulations and rules, addressing the punishments for students who get caught cheating. However, the University only translated "cheating" into Chinese despite this email being sent to every international student. 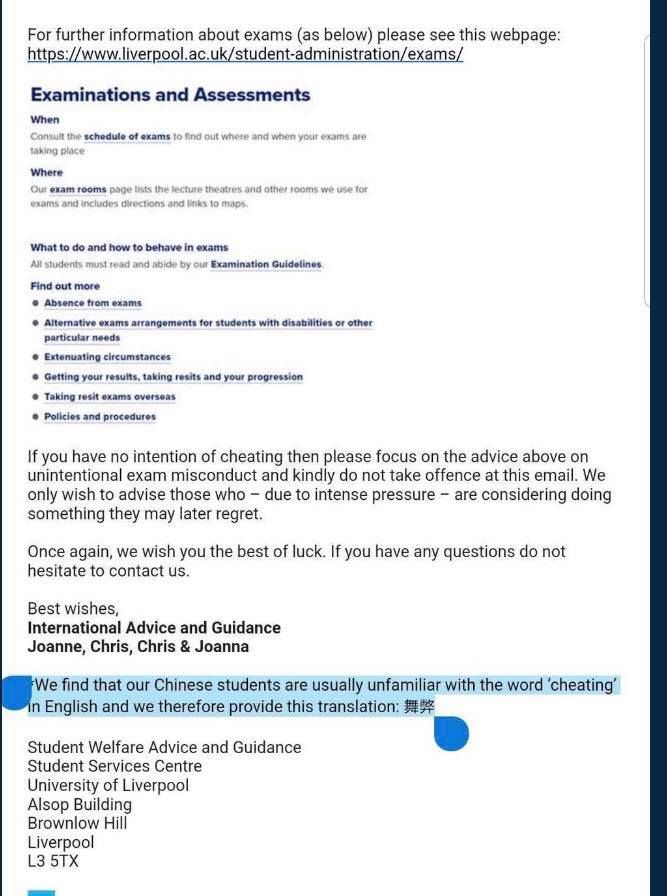 The University translated "cheating" into only Chinese and no other languages.

The University of Liverpool followed up this email clarifying they were not accusing Chinese students of cheating. They said: "The inclusion of the Chinese translation was not intended to give the impression that the exam misconduct advice was aimed at Chinese students. We have had feedback from Chinese students regarding the terminology so were addressing this to ensure our advise was clear." 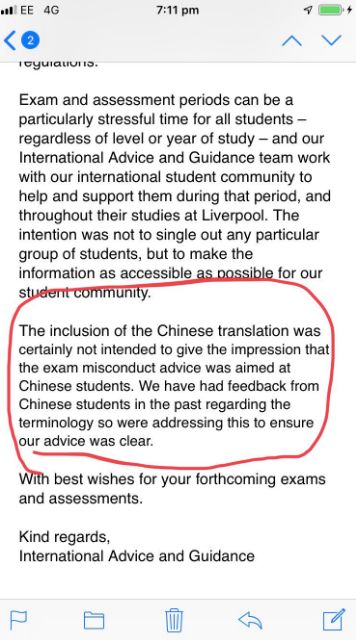 International students have expressed their disgust towards both the original email and the university's apology email.

The obvious implication was either that Chinese are shifty cheaters or too stupid to understand English… How backwards is that? And all we get is a half-serious Twitter apology, ridiculous

Is cheating a complex word for us? Maybe discrimination is much more than that.

There is no misunderstanding, simply prejudice and racism. Anyone admitted to UoL meets minimum English language requirement. Claiming that Chinese student do not understand the meaning of 'cheating' is equal to saying there is a loophole in the admissions process.

Many students have called it out for being racist as well as demanding an apology from the university.

When The Liverpool Tab contacted the university press office, we were informed that Dame Janet Beer has responded to the accusations with an apology email delivered to all students, the email reads as follows:

"Dear students, I am writing to apologise following the email issued to all international students from our international advice and guidance team yesterday.

"There was a paragraph in this email which caused significant offence and has upset our students, parents and partner organisations. This was a mistake and is not representative of the high regard in which the University holds its Chinese students. It was wholly inappropriate and I apologise wholeheartedly for the offence it has caused.

"We take full responsibility for the mistake made and will review our procedures and take appropriate action to ensure nothing of this nature happens again.

"My heartfelt apologies once more for the offence caused."

Are you a Chinese student and have taken offence at this? Please get in contact with us confidentially by messaging us on Facebook or emailing jonny@thetab.com