Welcome to university in 2018, here’s everyone you’re about to meet

Congratulations! You've made it to university, a place of academic freedom and individual expression. Unshackle yourself from the chains of your teenage past. Throw away the ugly wardrobe you've accumulated over the years. You're about to reinvent yourself a whole new look, just to resemble everyone else around you and subsequently become a meme of yourself on this very website!

Here's every annoying person you're going to have to live with for the next three years: 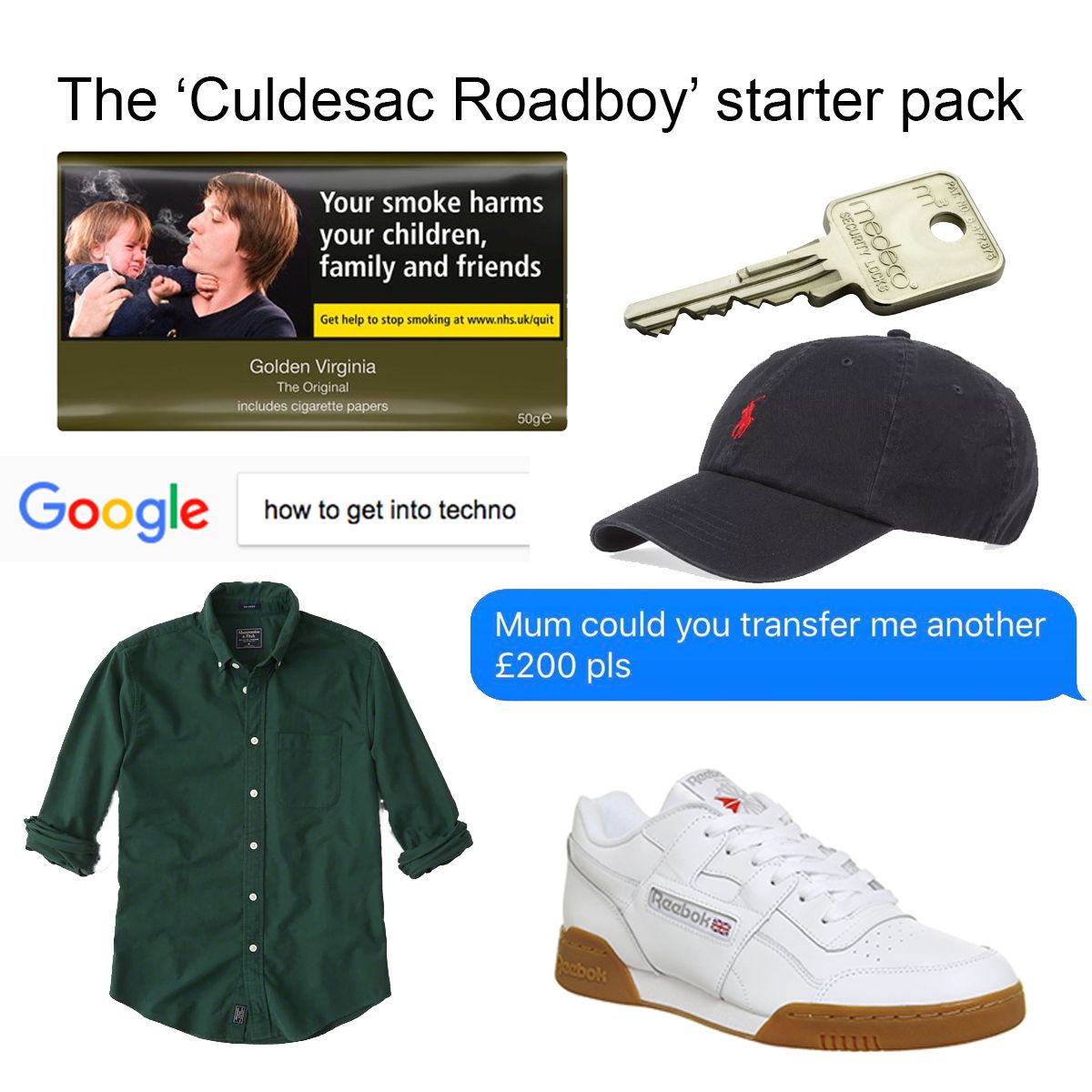 Most likely from leafy Surrey but will tell you he's from Croydon every time you ask. When conversing, he tries to give off a mysterious vibe by slightly squinting his eyes and slowly nodding to everything you say. He has no idea what you're on about most of the time, but will fool you into thinking he's interested by saying "oh no way man" every now and then.

His friends at home call him by his last name but at uni he's called Finn. Finn will invest in some DJ decks by end of week two. Fill thinks he'll make it as a bedroom DJ, but the only DJ-ing he'll do is during pres. Luckily for Finn, his flatmates will always get too fucked to notice just how shit he actually is. Finn will barely scrape a 2:1 in History at the end of third year, but he'll make it. 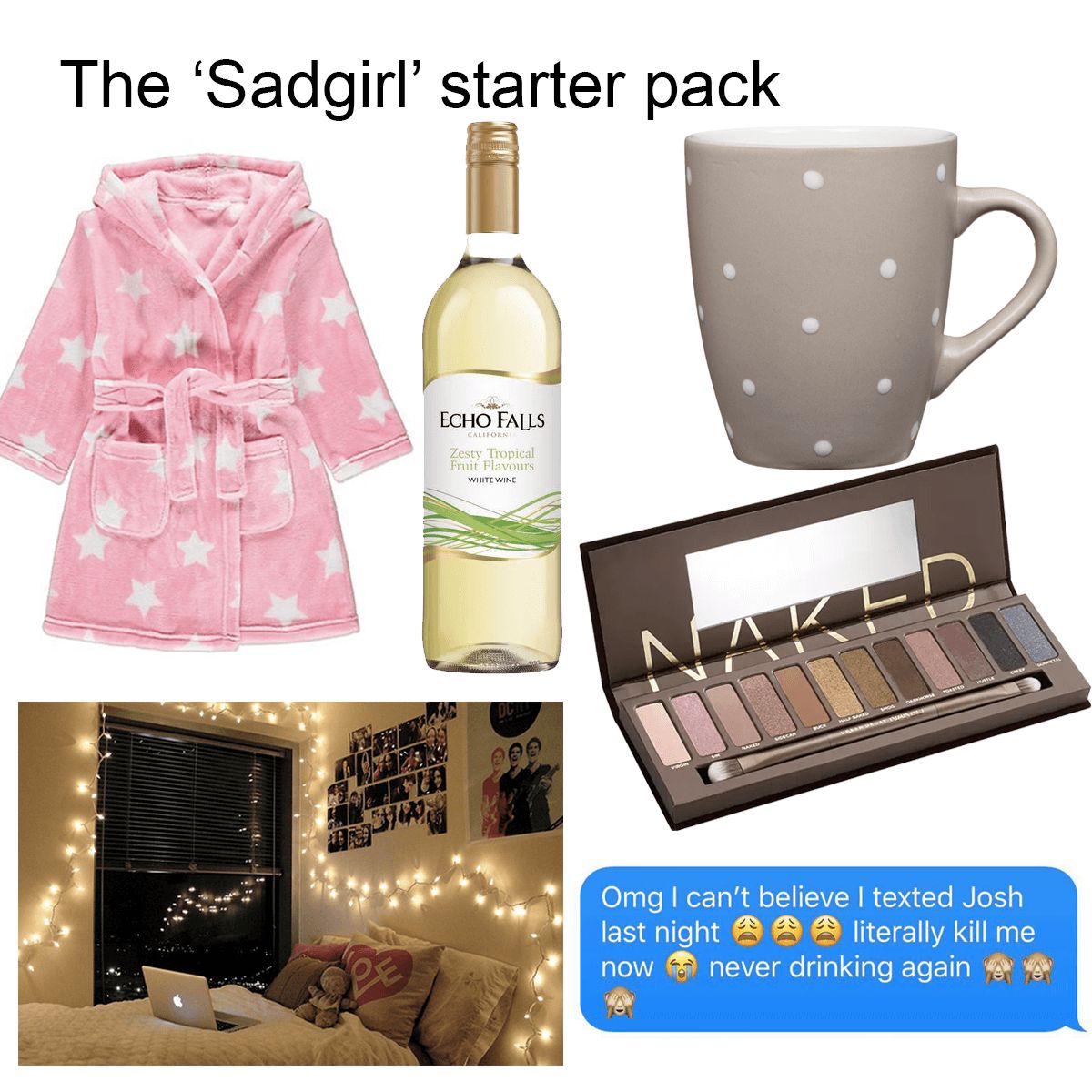 The Sadgirl's room is her safe space. She stashes chocolate hobnobs and other emergency snacks underneath her bed. The only time you'll see her in the kitchen is when she's making her eleventh mug of tea. You'll often find her sitting in a dressing gown, watching shows like The Chase or Come Dine With Me after her Psychology lectures and thinking about her ex-boyfriend who dumped her a week before Freshers'.

But when it's time to go out, she uses her Naked palette and Anastasia Beverly Hills Contour Kit to transform her face, making a change from her usual half-dead look. She'll down an entire bottle of Echo Falls at pres, being on top form for approximately 2-3 hours, until she has one shot too many. Her state will rapidly decline as she's sick in the toilet and then she'll text her ex, again. Only to regret it in the morning, again. 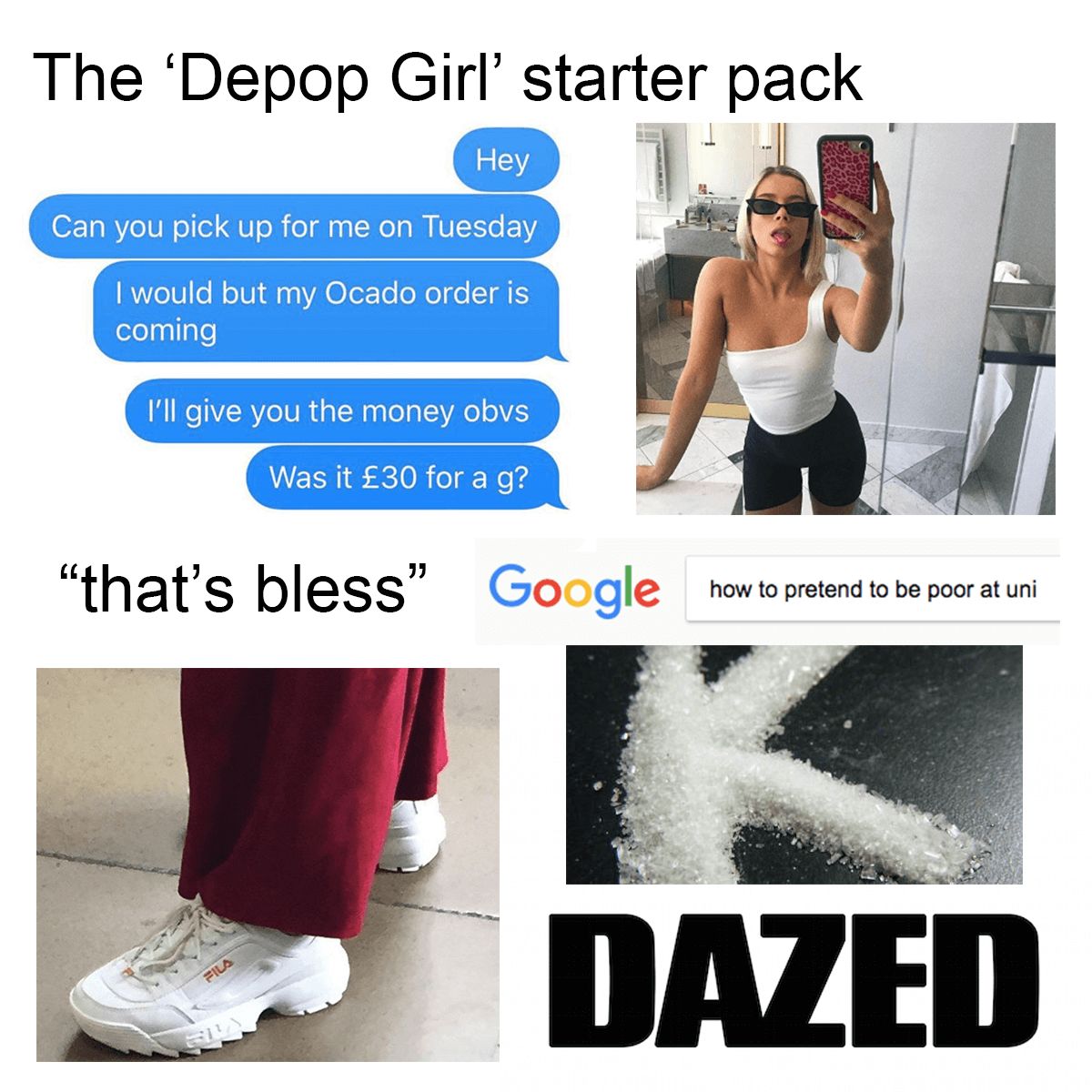 “Oh my God have you seen the new Balenciagas? They are such a vibe”, is probably the first thing she will say, as she turns up to your pre-drinks dressed like a tiny child, complete with headband, a charm bracelet and pink hair clips that aggressively scrape her hair to the side.

If there ever was dedication to a look, it is this; the hours on Depop, the endless glossy pouts, the ironic mirror selfies. She had a very precious upbringing, probably in the home counties somewhere, but the aesthetic is strictly shiny and young and sad. No smiles allowed. Thankfully though, you can always count on this Groovy Chick to whack on her flares and teeny tiny sunglasses and p-a-r-t-y, and she will be the life of it. The sort of hot mess who k-holes mid way through the night and carries on anyway. She didn't come to uni for her History of Art degree, she came to party for three years straight. 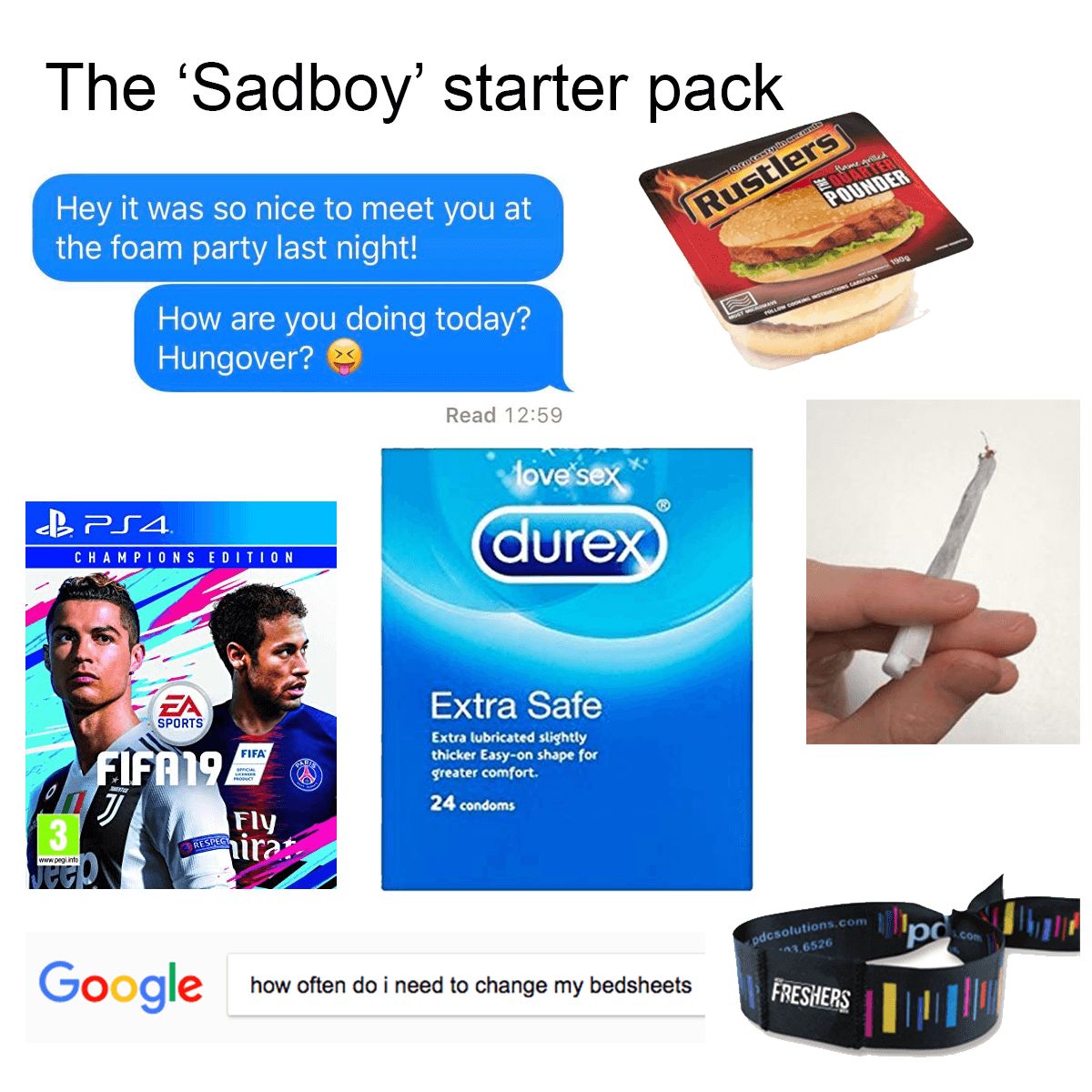 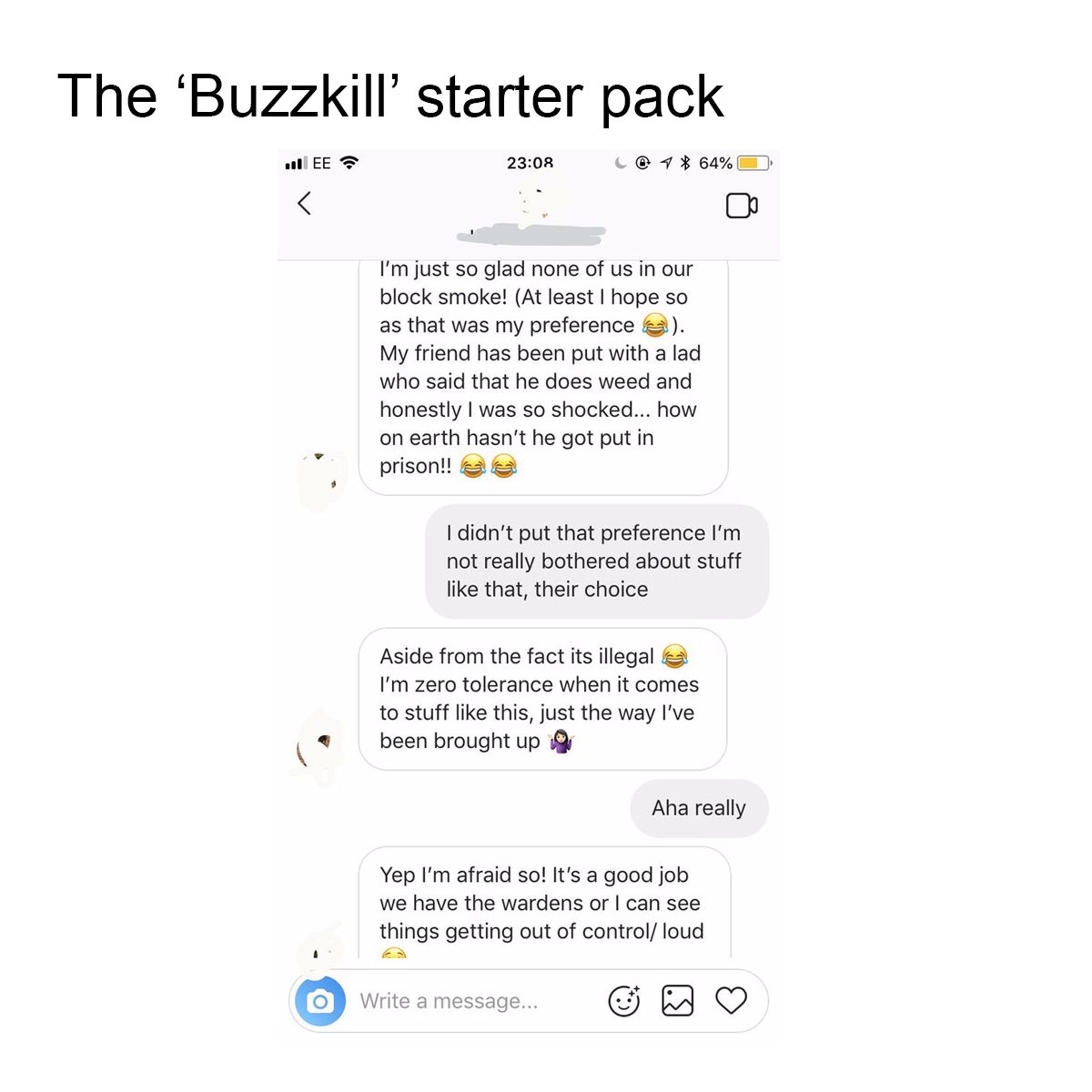 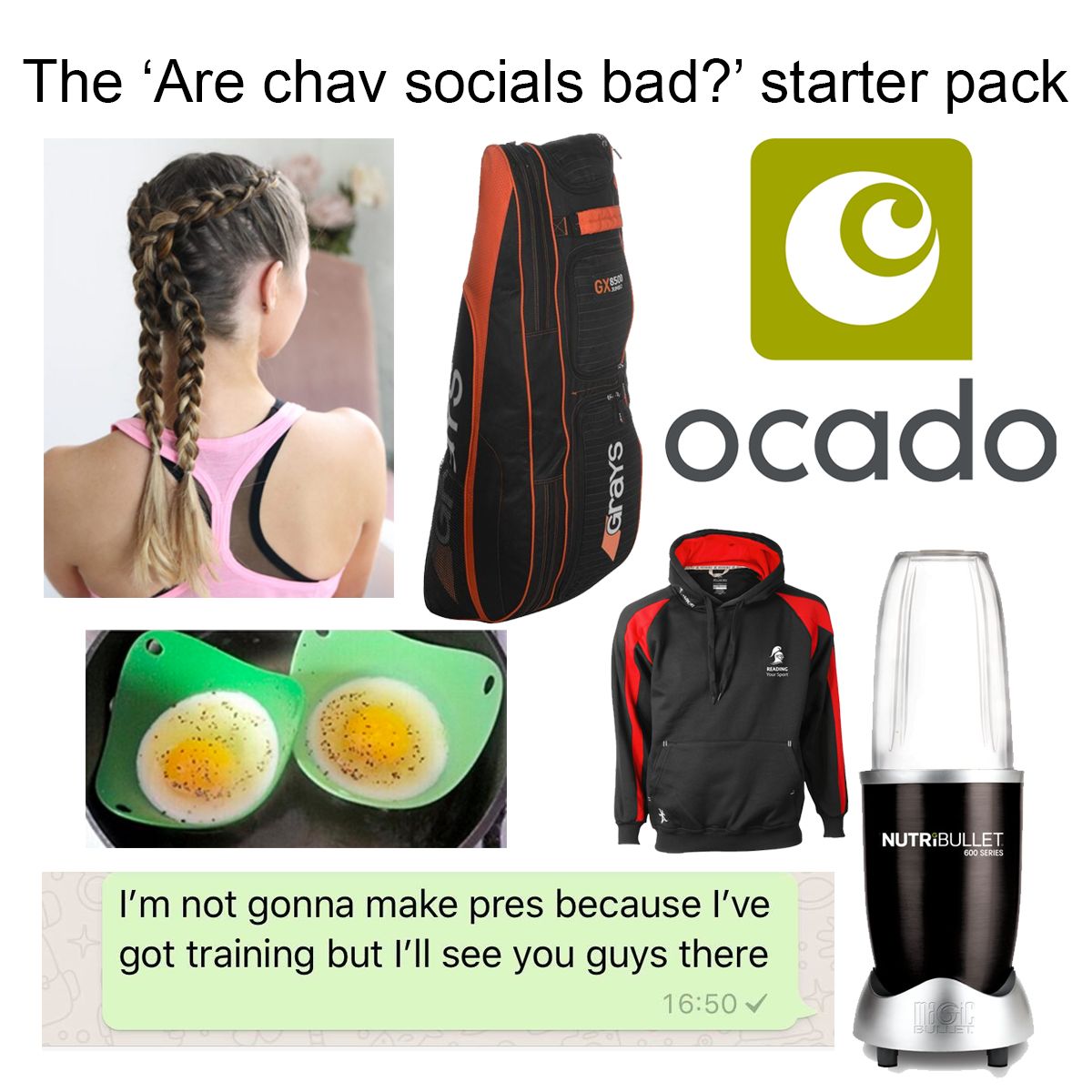 You'll never see her because she has lectures back to back, packed with Hockey and Lacrosse training in between. You didn't even bother doing one sport, but somehow this girl is juggling two, going to all the socials and consistently getting Firsts in all her Biology assignments.

She's from a wealthy background and she'll hide it well until you see her essential Waitrose delivery containing Rose Harissa and Organic Gluten Free Soya Sauce.

Make fun of international students being reckless with their money all you want, but they'll out-dress you in every lecture and on every night out. I won't have a bad word said about them. 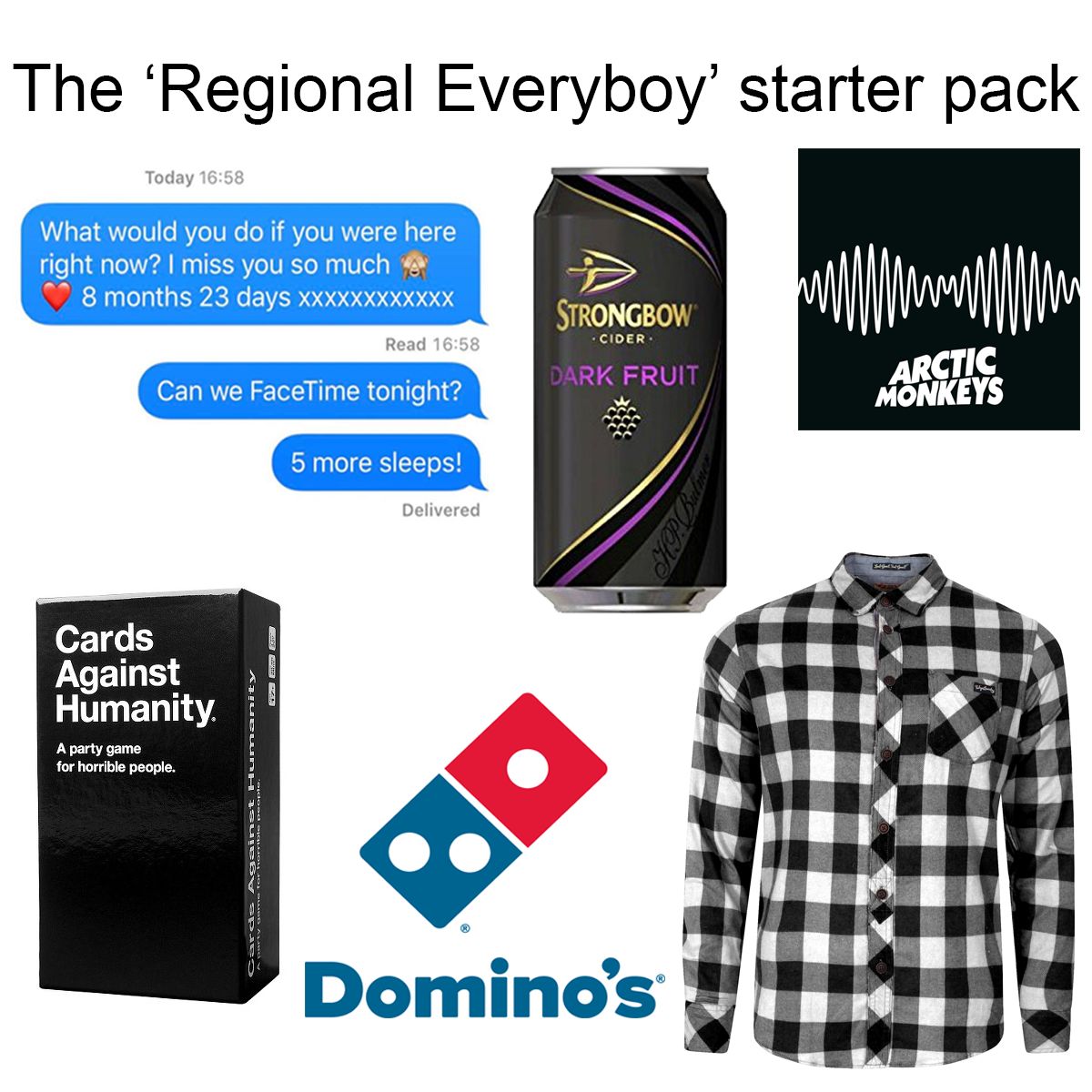 The Regional Everyboy doesn't actually care about his Business and Management degree at Nottingham University, he just wanted to go to uni because he needed to get out of his dead-end hometown. Besides, all his friends and long-term girlfriend were off to uni and he didn't want to feel left out. He's your average, run of the mill student, making the types of jokes you make when you playing Cards Against Humanity, all the time. 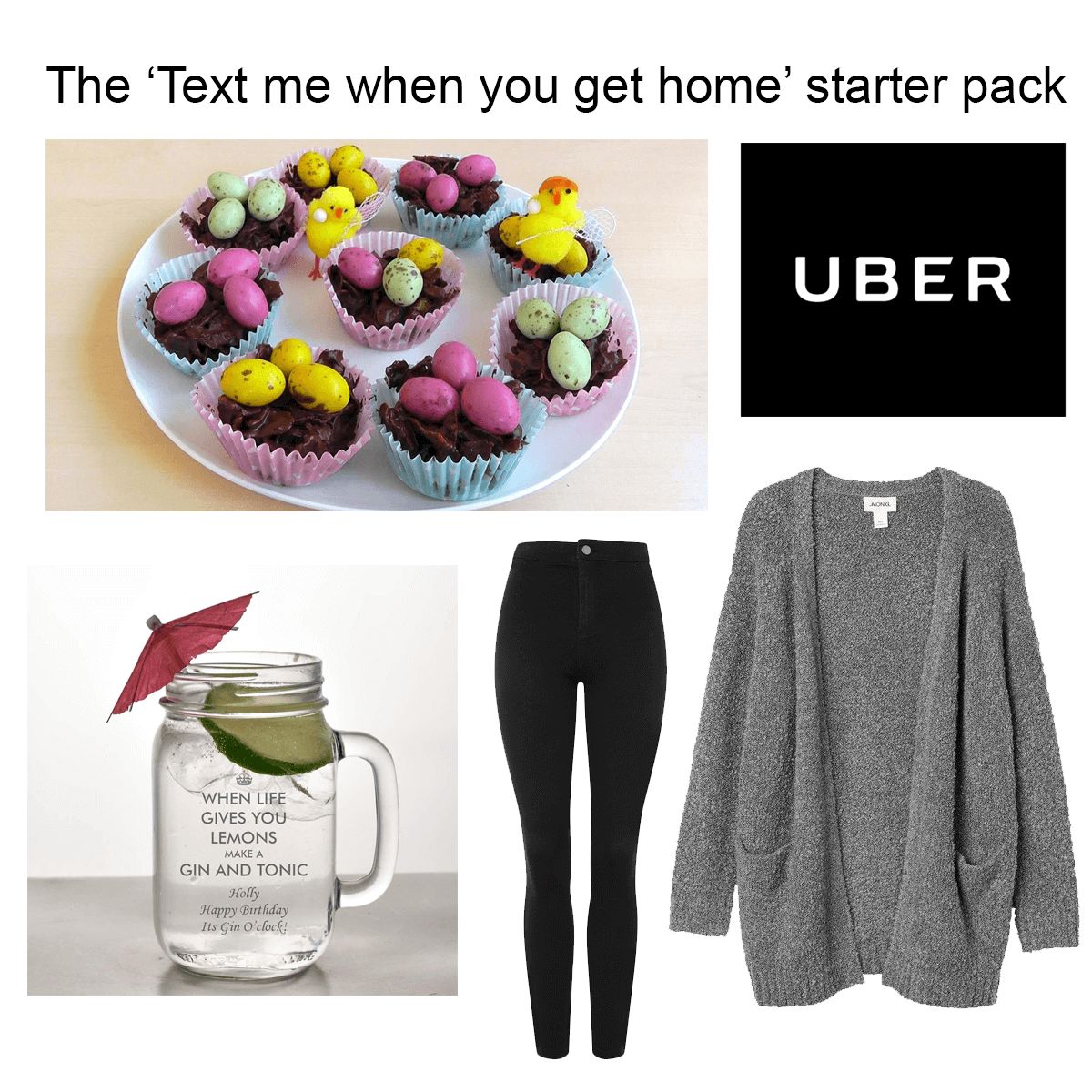 "Hi everyone! Can’t wait to meet you all – just wondering if anyone in my flat (Flat 0E corridor 5!) has bought a toaster, kettle or iron? If not I’ve got them all! Where is everyone from? And what is everyone studying?"

The mum of the flat is a much loved figure. At pres, she'll put on Taylor Swift and Paloma Faith, drinking a moderate amount of Gin and Tonic from a jar glass she found in Tiger. She sorts out the Uber before a night out, holds back your hair when you're being violently sick outside a club and will make you a bacon buttie to cure your headache in the morning.

In her spare time, she FaceTimes her long term boyfriend, bakes cakes and goes to Zumba classes. She's not even worried that her life resembles that of a 30 year old. She embraces it. 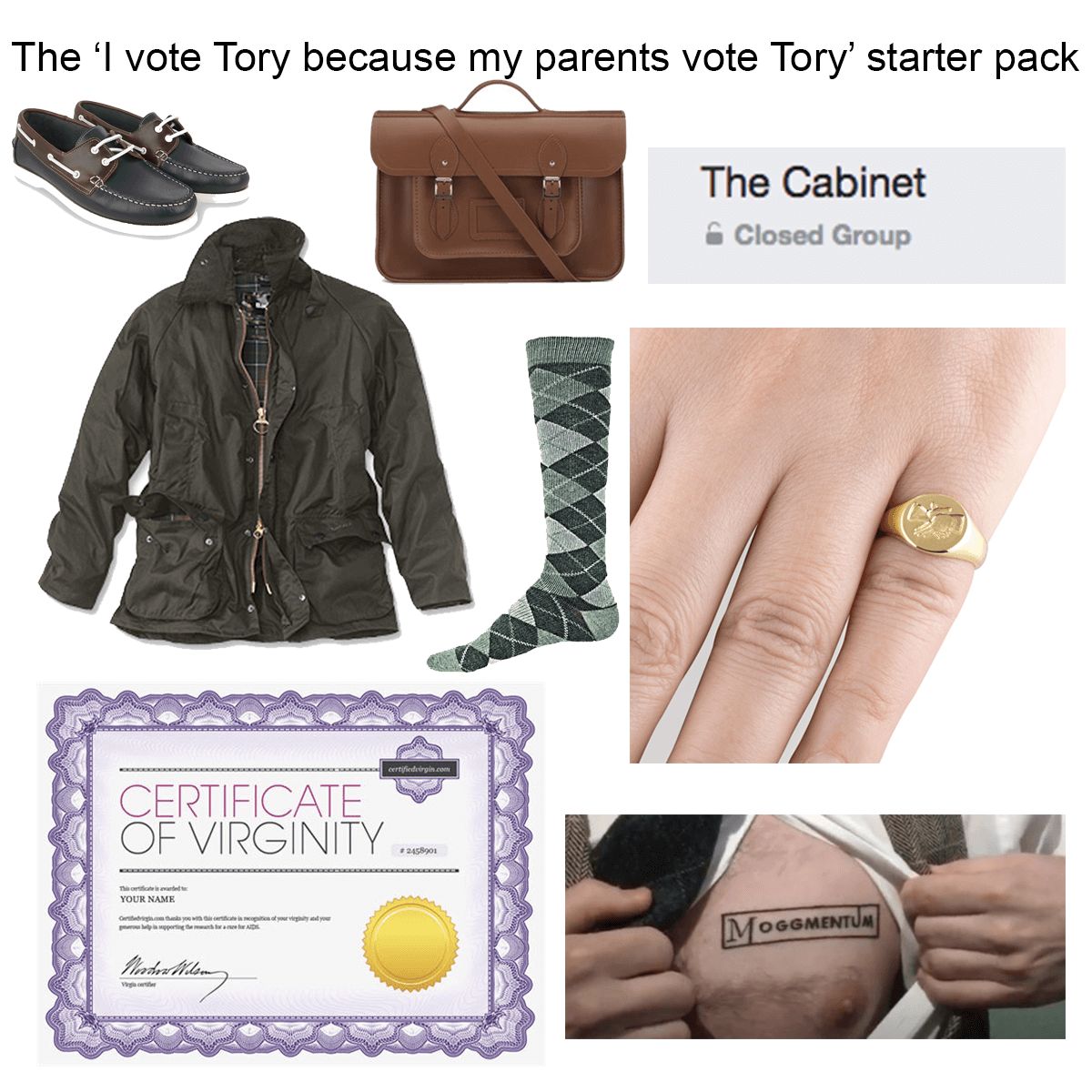 Eloquently spoken, he'll tell you how much he thinks we should Leave the EU when he wasn't even old enough to vote in the Referendum. Quickly realising that's not a popular view to have at university or in his Politics lectures, he'll join the Conservative Association, spending the next three years living in a port-quaffing echo chamber of virginity. 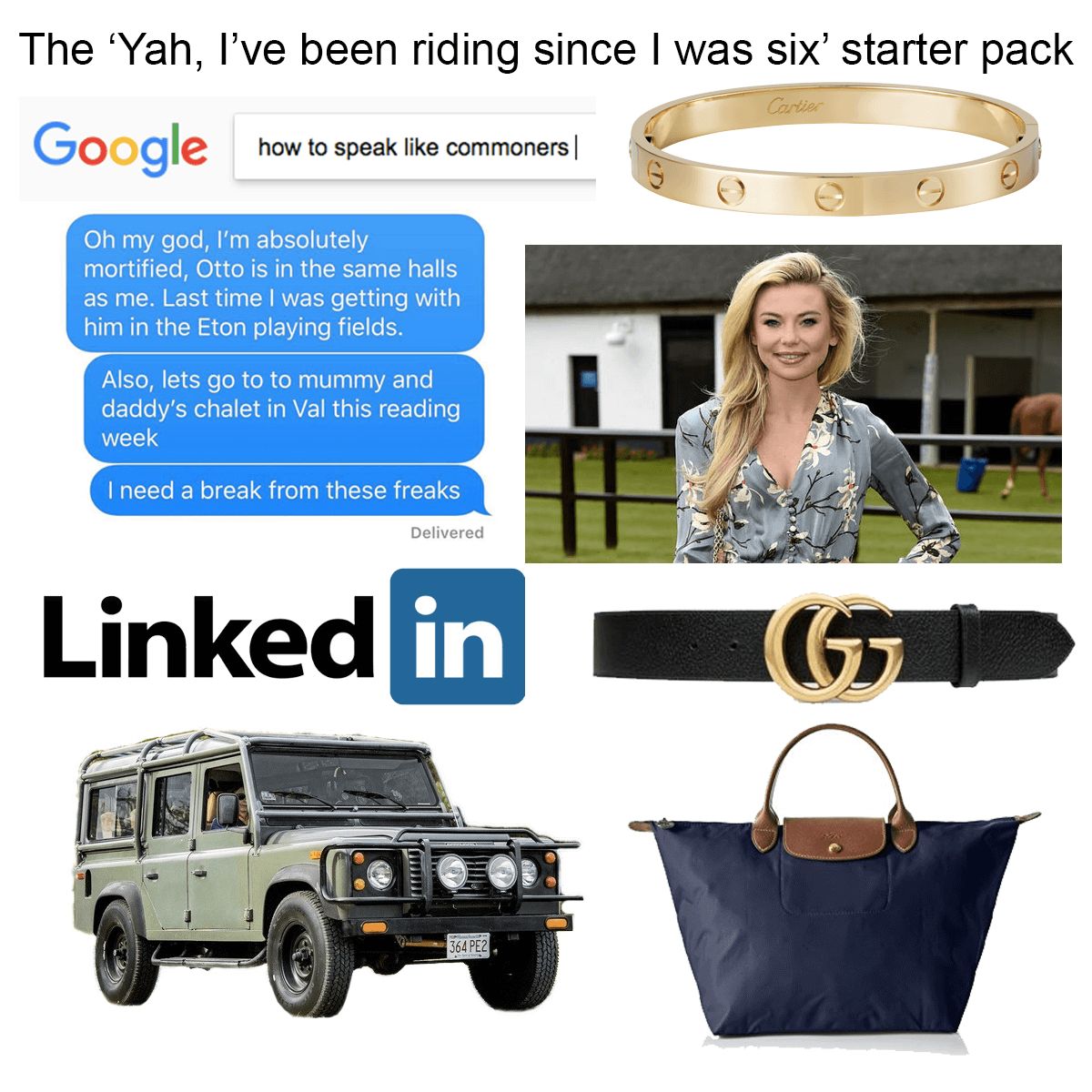 This girl's resting bitch face will make your entire existence feel inadequate. She'll strut around campus in her expensive leather boot heels and a long tailored coat. A disposable coffee cup in one hand, pushing her long hair back with the other and pouting at every chance. She'll attempt Freshers' week but will quickly realise she's better off forming a clique of fresher toffs and never speaking to anyone outside it.

• This is every single uni grad condensed into a starter pack