Animal Farm at The Annex

SUSU Theatre Group puts on an impressive and successful satire.

SUSU Theatre Group’s ambitious fresher’s play, an adaptation of George Orwell’s Animal Farm, is as impressive as it is bare. With a set comprising of just three hay bales and a chalkboard, the production leans heavily on its actor’s performances to invite the audience into their dystopian farm.

Alex Heyre’s Major is worth noting, as he begins the play by impressively setting a solemn, yet assured tone soon to be undercut with brilliant comedic performances by Jack Henderson, Darius Timmerman and Ian Bessant. One of the play’s key successes is this balance of comedy and drama. Too often can one devalue the other, but credit should be given to the directors for not letting the laughs distract from the outrage. Considering the source material and current politics it would have been all too easy to stage this as drab and miserable, but the production finds it’s feet early on and establishes itself as a successful satire; as worrying as it is funny. The transitions can be a little clumsy. The actors shuffling on and off a dark stage can be awkward when it goes on a bit too long, but this isn’t too much of an issue when it gets going again.

Mark Strong and Natalia May as two pigs who turn against each other both shine as striking and believable leaders, with the former successfully channelling the cringey charm and sly manipulation of real political figures. With so many notable performances it’s sometimes difficult to really leave a lasting impression, but Kamara Atkinson as the perceptive Clover slowly building her sympathetic and understated character over the duration steals the show once the final light shines on her furious and petrified face in front of the iconic ‘All animals are equal…’ slogan. 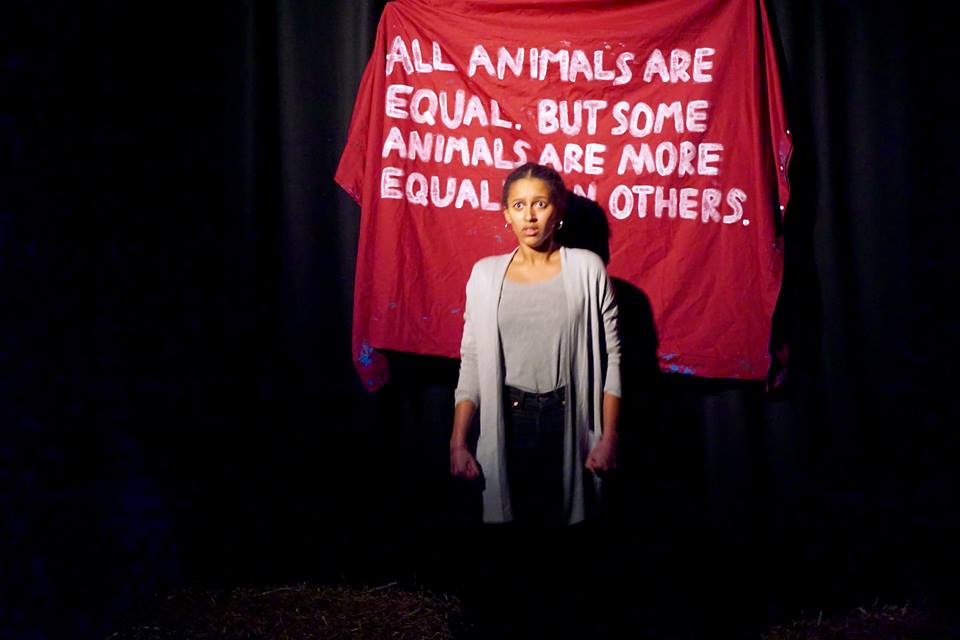 Watch out for future performances, this is an impressive team. Night at the theatre and a pint in The Stags for a cheaper, alternative night out. Lovely.