‘It’s about giving back’: The print project helping Sheffield’s homeless

Printed By Us have contributed to an exhibition opening tomorrow

Prints produced by nine people previously homeless, or otherwise affected by other challenging circumstances, will be displayed from tomorrow (13th July) at a new Sheffield exhibition.

Pete McKee's exhibition "This Class Works" has had input from Printed By Us, a social enterprise which is part of Just Works, a Cathedral Archer Project initiative running screen-printing workshops and doing custom printing.

The Tab spoke to James Creed, currently working as Operating Manager for Printed By Us, about the exhibition, his own experiences, and the enterprise as a whole.

How did Printed By Us start up?

Nearly two years ago, it was recognised that there were people coming through the project who had basically gained a bit of stability in their lives, they’d got housed, they were getting their benefits sorted and other things, and there wasn’t really anywhere for them to move on to, so it was then that Just Works was put together.

Just Works is the next stage project for the Archer Project and other local agencies support people with vulnerabilities, so again it’s for those people who have gained a bit of stability and are looking to move on, and what it provides a combination of some work experience and some training.

We are an approved supported permitted work provider, so we can provide paid work and run various different, and these are kind of micro businesses under the banner of Just Works. Printed By Us is one of those. 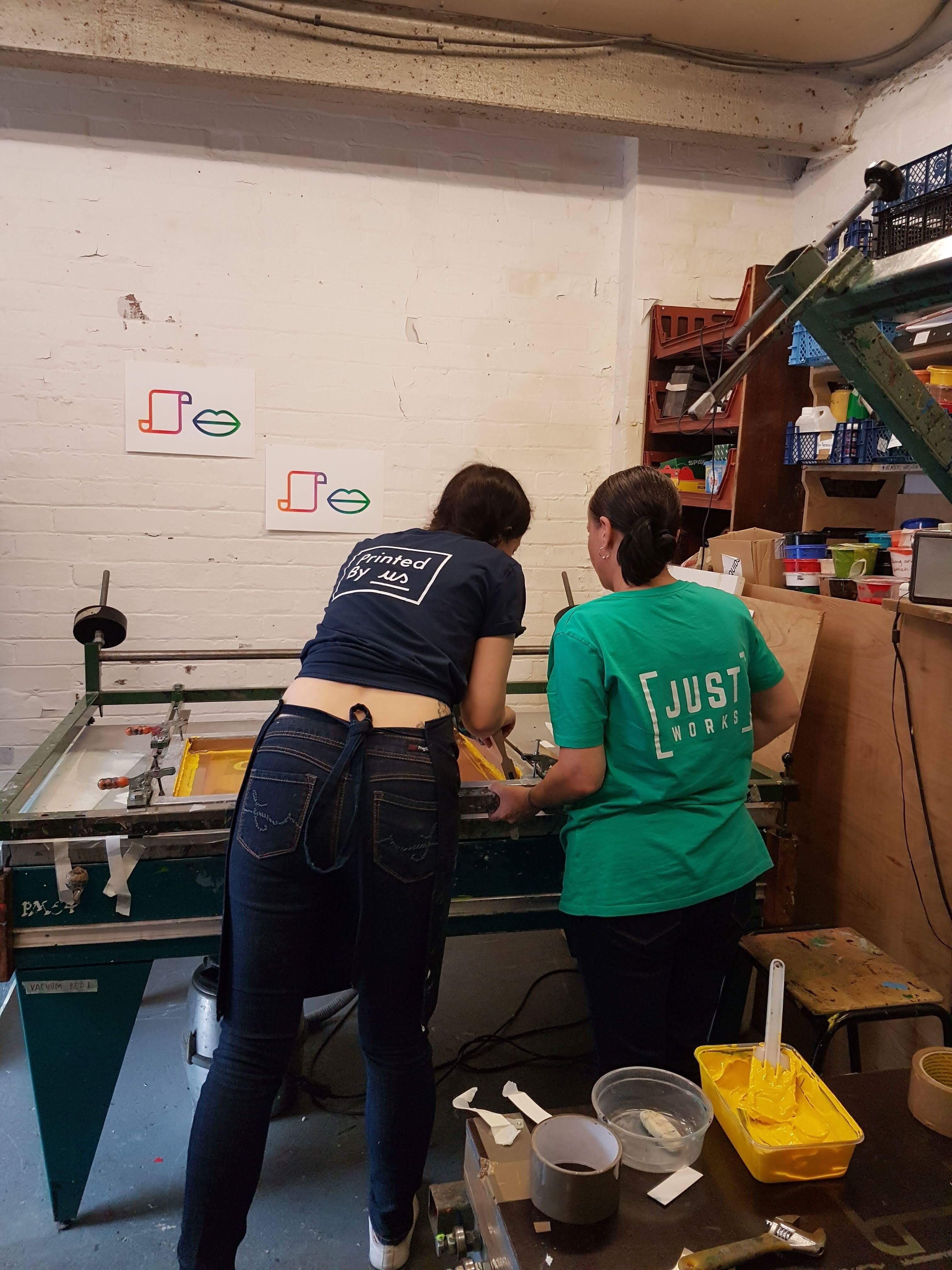 The idea for Printed By Us was brought to us by a gentleman called Mark Musgraves, a freelance designer who runs his own business, and he was looking to make a difference, after seeing a lot of homeless people about.

What Printed By Us do is work with a number of local artists and run screen printing workshops. So we will commission a local artist to produce a design for us, we will then screen print it, and then sell it online, at pop-up fairs, various local festivals. We also have recently branched out into custom T-shirt printing, we’ve done some work with some local businesses and some university unions.

We’ve worked with the Christian Union and Bummit societies at the University of Sheffield. We also do mugs and tote bags alongside that, so that’s a brief overview of what we do.

What led you to become involved in Printed By Us?

I myself was homeless for seven years, and I moved to Sheffield and I started to get things together for a bit. I was volunteering in the Archer Project, and I was one of those people who it was set up for.

I was looking to get back into employment, and was working for Printed by Us for about a year on a voluntary basis as we set it up and as it began to grow. As we have grown, I’m very lucky to be in the position now where I’m in a part-time paid role as Operations Manager at Printed By Us.

We’re a non-profit organisation. We’re a social enterprise where any surplus and money made goes back into the Archer Project, JustWorks, and Printed By Us.

What Printed By Us enables people to do is come along and have a go, it’s to learn some new skills, it’s to get used to being around people, and working with different people in unfamiliar environments. We have many people get involved, mostly on a voluntary basis at pop-up stalls, and it’s about building confidence, and giving back to the community.

It’s quite a traditional skill, screen printing, and in this digital age where things are samey and mass produced, people can be part of producing high quality work that people want to pay good money for. They can sign the prints and they’re going on someone’s wall. They’re going to be with people for a long time.

And you see the development in people, that’s what we do. We’re about transforming lives, Just Works and Printed by Us, and it’s great to see people making those leaps that I myself have made as part of my journey. 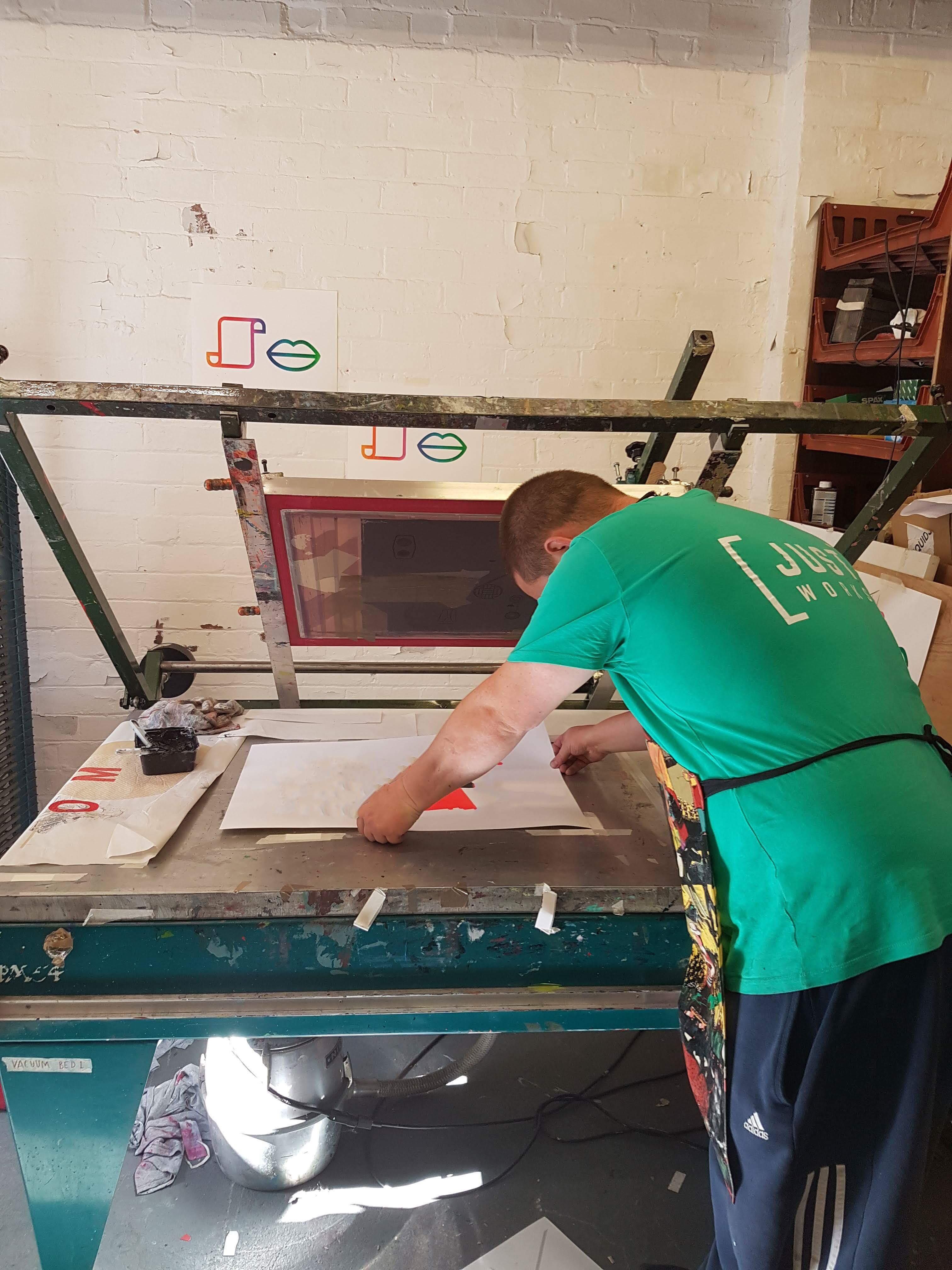 What are the details of the exhibition?

The launch is tomorrow night, and as far as specific details I wouldn’t be able to give you that much as it’s all hush-hush until it’s open tomorrow night, but we’re very honoured to have collaborated with Sheffield Print Club to produce some work for this exhibition. Their team and our team collaborated over a series of workshops to produce a limited run of hand screen printed designs which are to be auctioned off after the exhibition.

Where do you see the enterprise going in the future?

We recognise that Printed By Us is a model that works. We’re in talks to form a Printed by Us in Leeds, and possibly expand to Manchester. We hope to also become the real go-to place for custom T-shirt printing as well. Everything we do we ethically source, we use fair trade garments and we pay Just Works employees the living wage, not the minimum wage. We hope to just get as many people involved really, so as many people as possible can benefit from what we do. Cos that’s what it’s about at the end of the day. It’s making a difference for people.

I’d just like to put out that our custom T-shirt printing service is available, and any unions or other people looking to get merchandise should get in contact with us via the website printedbyus.org, and it’d be great to work with as many people as possible, and we’re very, very excited to be working for the exhibition tomorrow night.