They quoted one of their own writers as evidence

UEA's student newspaper Concrete has been criticised by students for a story labelling an SU officer a "hypocrite", quoting one of its own writers as evidence.

The article claimed students were critical of SU officer Amelia Trew, after she opposed Concrete's use of the word "crisis" in regard to mental health, despite using the same word to describe mental health in her own election manifesto.

The article went on to quote three students sharing this opinion. The first an "anonymous supporter" of Ms Trew's campaign, the second "a biology student" with no link to the newspaper nor the writer, the third a regular contributor and Music Editor for Concrete. 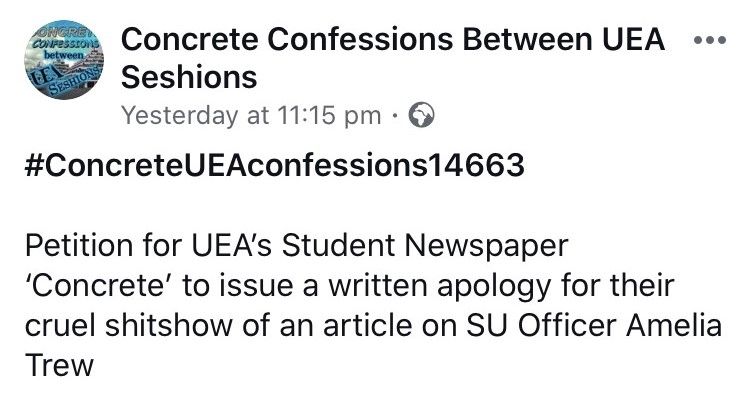 The third contributor, Lewis Oxley, was quoted as "a third year English Literature with Philosophy student", though the article failed to mention that Mr Oxley writes and edits for Concrete.

Concrete's Editor-in-Chief, Chris Matthews, defended Mr Oxley offering his opinion. He told The Norwich Tab, "Venue – the arts supplement where he writes – and Concrete are run by different teams.

"Being a contributor doesn't mean he cannot have opinions".

Chris refused to tell The Norwich Tab whether the quoted anonymous source had any links to Concrete.

He said: "Concrete reached out to a number of students from across the university.

"Our role as a newspaper is to tell the truth and to hold authority to account.

"Ms Trew is an elected officer – elected by students. She is accountable to students.

"We reported the facts, we ourselves haven’t taken a side, and as impartial journalists we will not be taking a side.

"People engaging in content is often a by-product of good journalism.

"I’m glad students are engaging in this piece."

The article was published on Concrete's website as well as in papers, and many anonymous comments condemned the story.

One writer in the comments said: "I don't see why [Concrete has] attempted to start a public smear campaign against someone who's trying to do good" and another argued "this isn't even news, it's just sensationalist media".

UEA's popular confessions page "Concrete Confessions Between UEA Seshions", which has almost 11, 500 readers, has since posted an anonymous confession branding the article "cruel" and demanding a "written apology" from the newspaper.