Security at the University of Manchester have been denying protesters in the John Owens building access to food, The Manchester Tab can reveal.

The group has been occupying the John Owens building for two days now in protest of the university's continued investment in fossil fuels, where they have been based primarily in the finance boardroom and entrance hall.

One of the protesters told The Manchester Tab food was blocked from being brought to the group, and security staff "were taking the names of anyone who brought food." 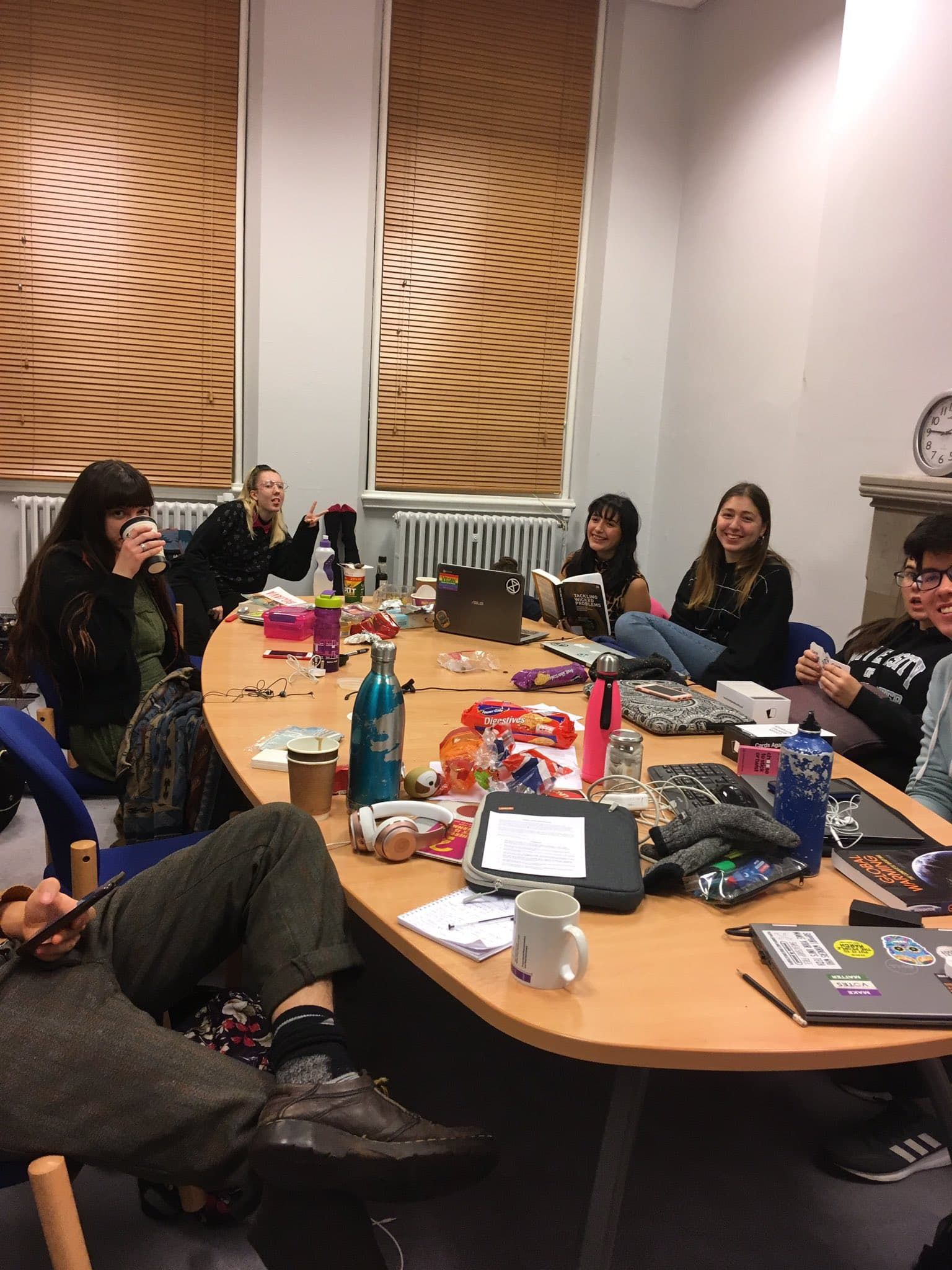 Early in the semester, the students of People and Planet Manchester sent an open letter to the university "asking for a dialogue to be started about divestment," warning potential action if they received no reply.

At 9am on Tuesday morning, 18 students stormed the building and have since been camped out in the finance boardroom. A statement from the group said: "We’re bringing this to their doorstep so that they can’t ignore us anymore.

"We’ve tried hard to engage with the University Officers and the Board of Governors but they refuse to open a dialogue with us. If we’re sitting inside their offices they don’t have that option." 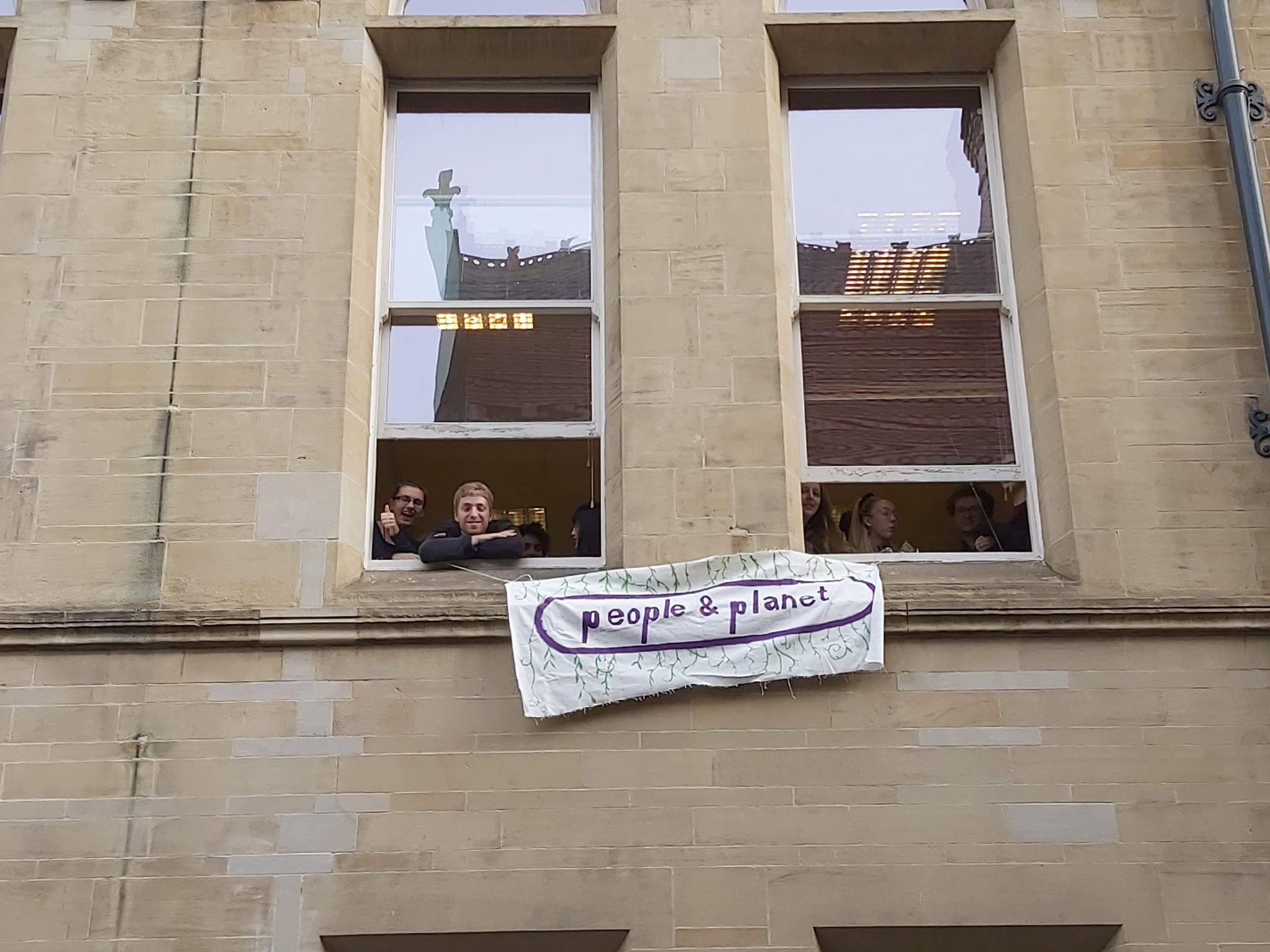 Of the 18 who initially stormed the building "about 13-14" remain, according to one of the group's members.

Kate, a member who remained told The Manchester Tab: "No one has dropped out that didn’t already plan to go beforehand."

"I don't know how much food they've got left. Basically they're not allowing any more food into the building," another member, Adam, said. 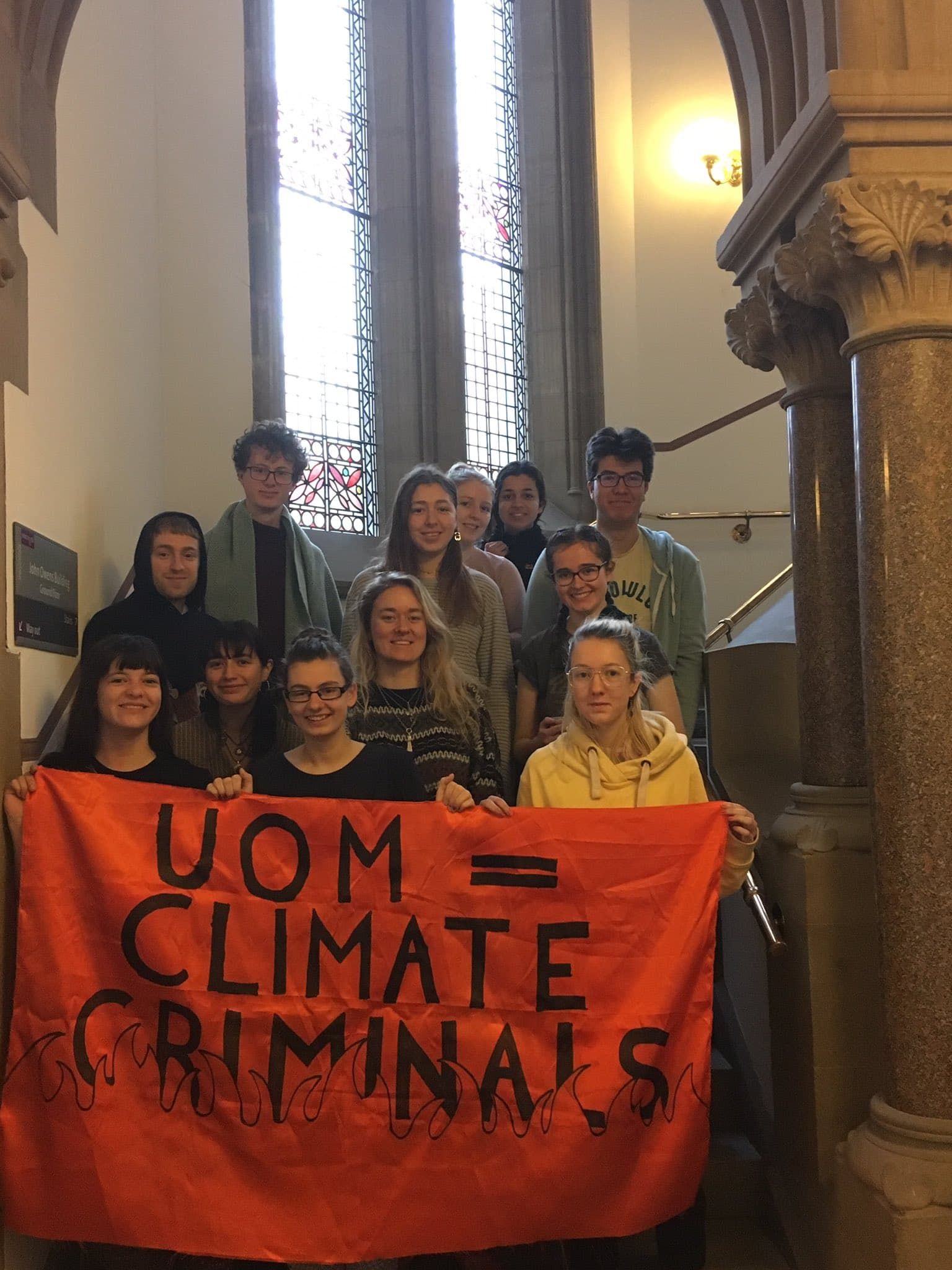 A smaller group is camped in the entrance hall, this group has access to food, which they are attempting to bring to those in the finance boardroom, but "don't have access to a toilet."

"We were never intending to be here, we were just trying to bring food through," Adam told The Manchester Tab.

Adam also said he was planning to meet with senior leadership today. 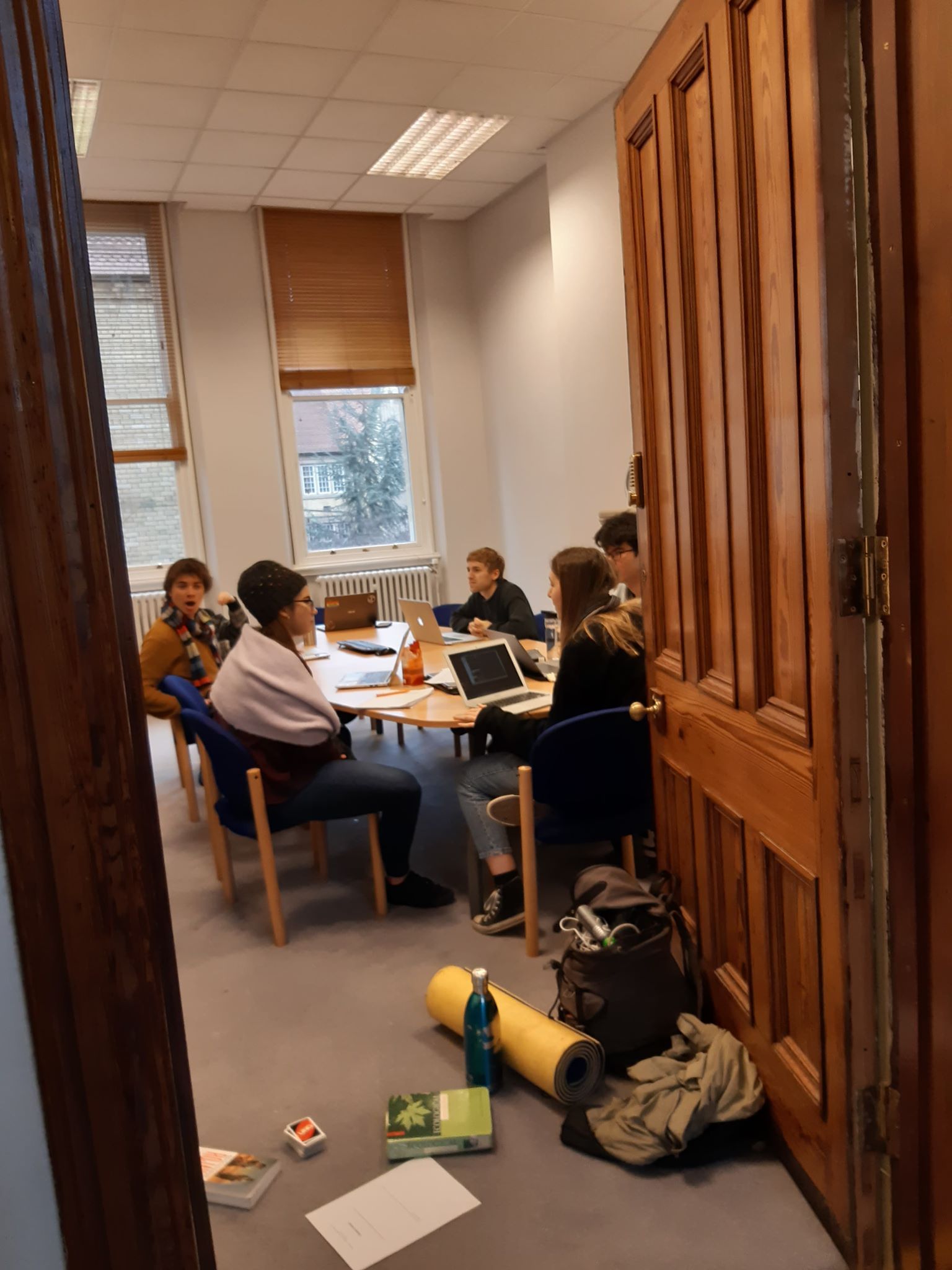 Despite this, the group remains in high spirits. Kate told The Manchester Tab: "We’ve all been working a lot actually as everyone has deadlines. In the evenings we’ve been playing cards.

"It’s been intense and we’re all pretty exhausted. Sleeping on hard floors isn’t great, or in the cold for those who are in the corridors."

Another member, Kayleigh, said: "We also do stuff like play boardgames, sleeping bag races, and yesterday we had a group yoga session (security were baffled which was quite amusing.)

"Mainly I'm feeling frustrated by the University's response but the messages of support and solidarity from other groups really help to boost morale."

The frustration is echoed by Kate, who told The Manchester Tab: "We’re really disappointed with the university’s response, both in terms of their letter which ignored all our demands and their instructions to security to prevent food coming in and to turn the power off.

"It’s made us all the more determined to continue though until we get an actual commitment to divestment." 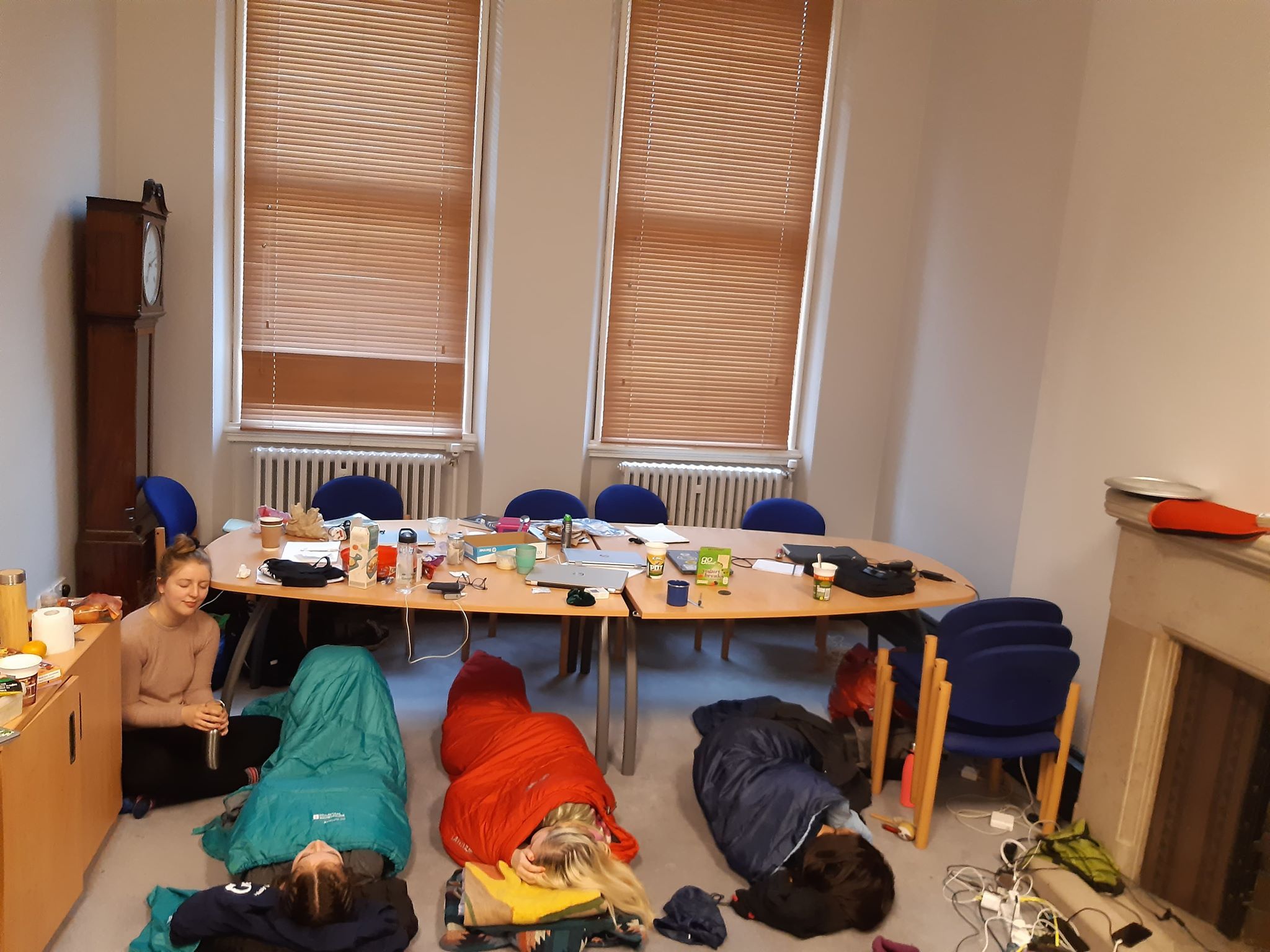 A spokesperson for the University of Manchester said: "We welcome the chance to meet with students as it long as it is through the appropriate Students’ Union representatives. We have offered to meet on that basis.

"The University recognises that students have a right to protest peacefully, providing that this does not unduly disrupt the conduct of the University’s normal business.

"However, by occupying the corridor and meeting room they are causing significant disruption.

"On the issue of divestment, our policy is clear and in the public domain as part of our Socially Responsible Investment Policy (SRIP).

"We no longer invest in companies with more than five per cent of their revenue from thermal coal (the type of coal used in power plants) or oil sands (also known as tar sands).

"We sincerely hope that the students will accept our offer and we look forward to meeting them in due course."

• Exclusive: Karen from Outnumbered is a fresher at the Uni of Manchester

• Manchester has been named the eighth best university in Europe!!

• 22 per cent of students in Owens’ Park halls last year got 2:2s and honestly, is anyone surprised