There are 19 confirmed fatalities and 50 injured

Following a possible explosion at the MEN Arena earlier this evening Greater Manchester Police have released a statement that the incident is currently being treated as a terrorist attack.

British Transport Police have confirmed that an explosion happened “within the foyer area of the stadium at 10.30pm this evening”.

The cause of the explosion remains unknown but police have confirmed that there are a number of fatalities and others injured. However, North-West Counter Terrorism are treating it as a possible terror attack. BBC reports stated that “Senior national Counter-Terrorism officers are assembling in London and are liasing with the Home Office”. 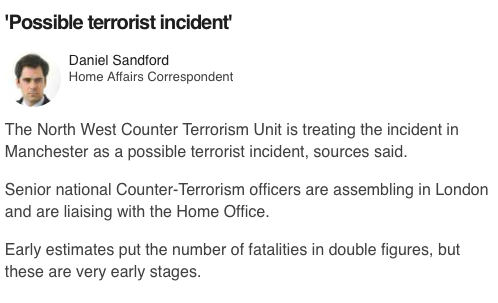 North West ambulance services are asking for people to “bear with” them if they need any assistance at this time.

Due to the incident in Manchester, please only call us for life threatening emergencies at this time. Thank you.

NHS sources are saying the explosion at Manchester Arena was a nail bomb attack. Still unconfirmed.