Someone call a Safe Space Marshall

Former KCLSU President Ben Hunt has recently been appointed to The Office for Students, a panel dedicated to upholding free speech at universities. Hunt’s appointment did not go down well with those at the Telegraph, who had previously covered his campaign to remove Lord Carey from KCL’s window displays, and now (falsely) claims that the 2015-16 KCLSU president supported “no platforming” policies.

It might be unsurprising to some that Hunt, while an LGBT Officer candidate, campaigned against the display of Lord Carey, former Arch-Bishop of Canterbury, who has been quoted saying that Gay marriage sets a "dangerous precedent" which could lead to sibling marriage or polygamy.

The Telegraph employs the same language featured in the Huffington Post, claiming that Hunt’s campaign formed part of a “gay-stapo” movement.

Hunt has since responded to the article on Facebook, noting that the word “gay-stapo” is a homophobic and anti-Semitic “slur” and “creates a tone of division which this project does not represent”. He added that, while he campaigned for Lord Carey’s removal, he did not call for him to be “no platformed”. 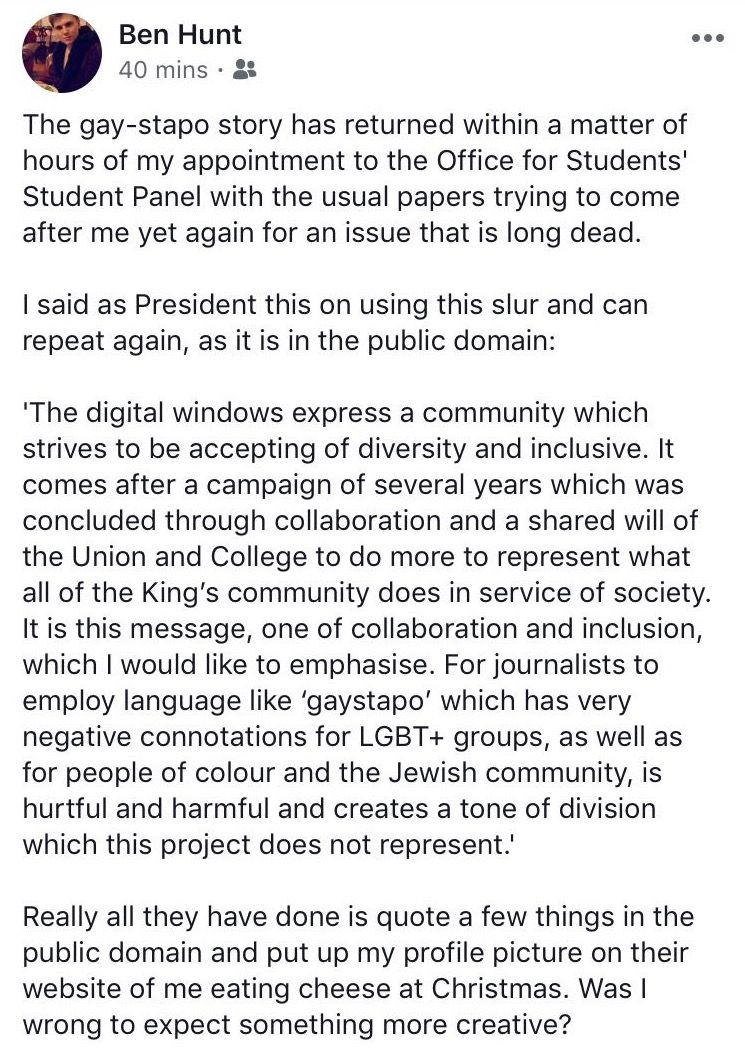 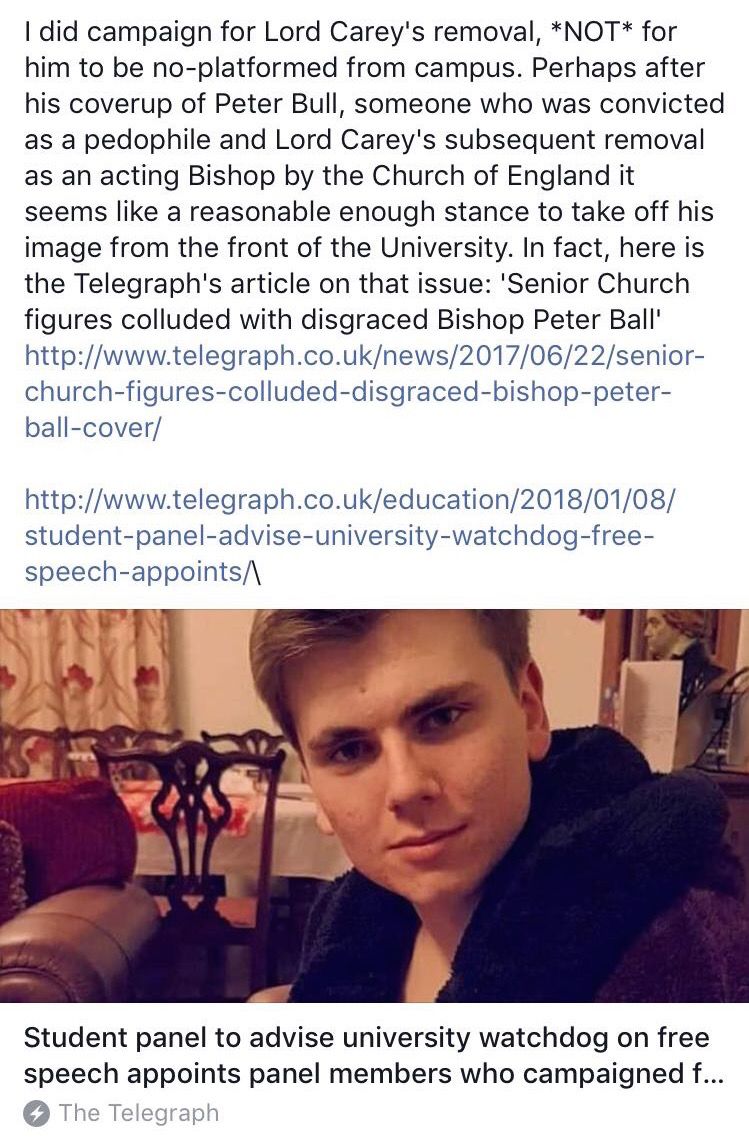 The rest of the article debates the controversy of free speech at university, the introduction of the OfS and who is on their student panel. Alongside Hunt, Sheffield Hallam's SU president Luke Renwick, whose own “no platforming” policy he claims, “simply codifies our stance that we will not tolerate racism on campus” is included.

It also throws a barbed glance at current NUS President, Shakira Martin, “a self-confessed drug dealer who did not go to university,” although it is unclear from the article what her inclusion in the article has to do with the free speech debate.

This adds to the depressing amount of baggage (lest we forget the Safe Space Marshall debacle) concerning KCLSU's relationship with free speech. 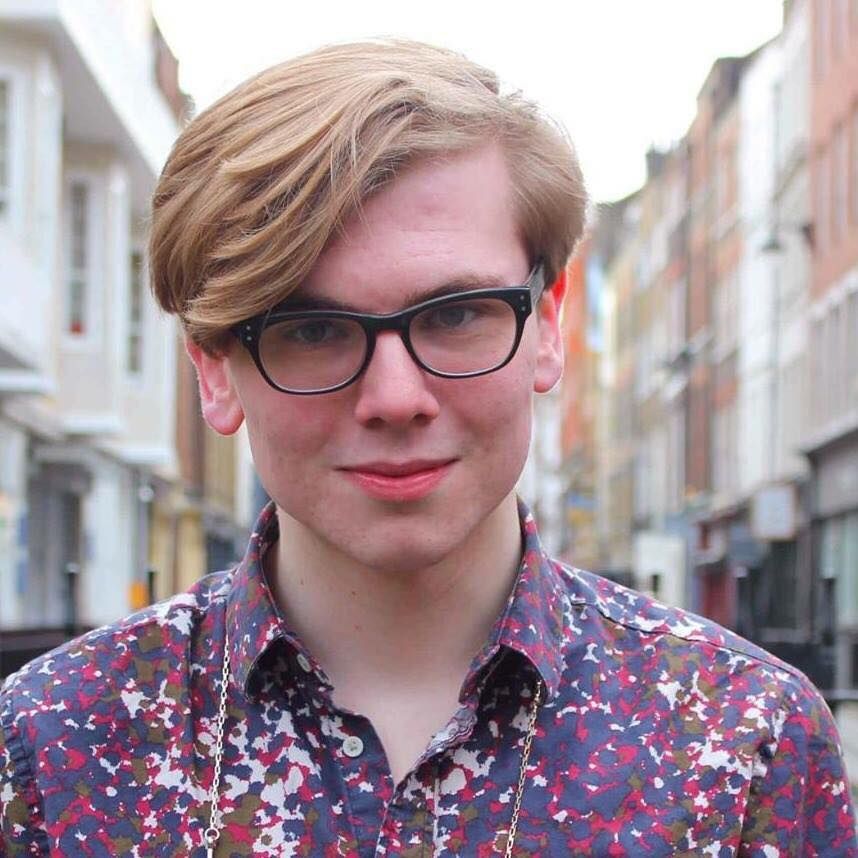 While Hunt no longer attends King’s, during his time as KCLSU president, the Union succeeded in putting Kosher food on the menu in KCLSU and university spaces, made sanitary products freely available in student centres, and ensured that King’s would act as rent guarantors for International students.

Ben Hunt replied to The Tab King's request for a comment to say: "It's great to be appointed to the Office for Students student panel this morning to get to work on prioritising student interest."

Accompanying his statement, The Tab King's obtained a statement written on his behalf by the CEO of the OfS, Nicola Dandridge:

“We expect the panel to offer constructive advice and challenge. The panel’s strength will be in the diverse range of opinions its members will be able to offer. We don’t expect or assume that all panel members will agree with all Government or Office for Students higher education policy. I am very much looking forward to working with them, as we seek to ensure that all students, whatever their background have a fulfilling experience of higher education.”

The Tab King's hopes to chat to Ben more after he's taken up his seat on the panel.