Hatfield to debate the ‘symbolic’ title of Senior Man

Hatfield College JCR will debate the title of Senior Man at their first JCR meeting this term.

The motion, proposed by Senior Man, Robert Double, and seconded by LGBTQ+ Reps, David Sheard and Nicky Whyms, and Welfare Officer Isabelle Horler, will debate a “Motion to introduce the titles of “Senior Woman” and “Senior Student” to the Standing Orders” on Sunday.

The motion will allow each year’s JCR President to choose the gender pronoun in the title, referring to themselves as Senior ‘Man’, ‘Woman’, or ‘Student’. 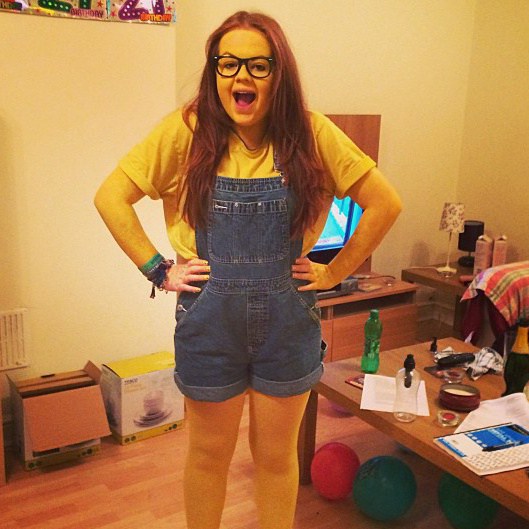 Current Senior Man, and proposer of the motion, Robert Double, told The Tab:

“I think that the amendment proposed strikes the right balance between retaining a unique and celebrated characteristic of Hatfield’s history, whilst also appreciating the views of all of the college community.

“I’d really like to thank Izzy, David and Nicky for their help drafting this motion. Fundamentally this is a decision we need to make as a JCR community, so I’m looking forward to our JCR Meeting on Sunday.”

Hatfield JCR were sent the motion in an email today: 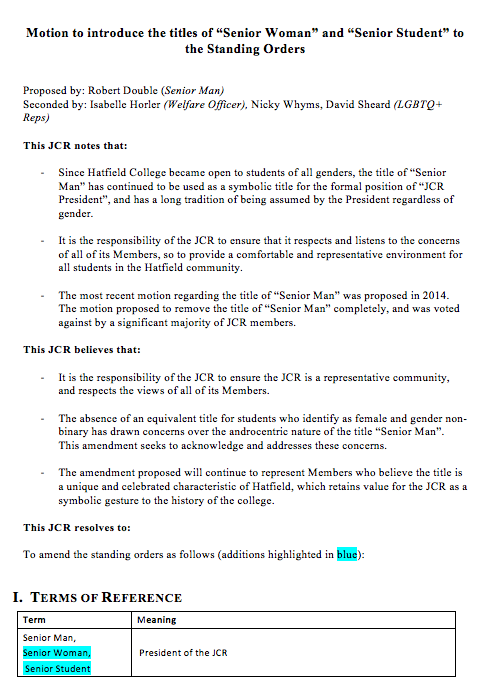 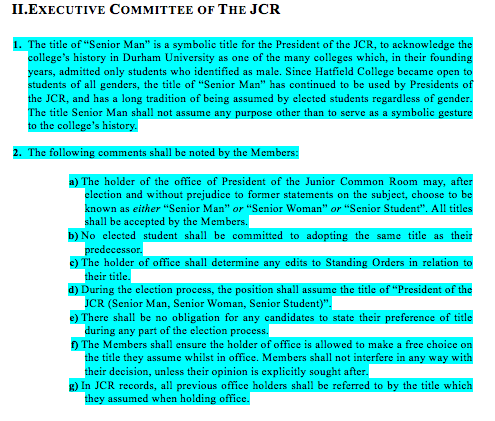 This comes just less than two years ago after Hatfield JCR rejected a motion to change the title of Senior Man to JCR President, without the option of changing the gender pronoun.

The proposed motion follows the footsteps of University College, who adopted the system of choosing the gender pronoun at the end of last year.

“I think it’s an interesting move considering the motion was shot down not even two years ago during the previous exec’s term.

“I think that the difference between the two motions just confuses the issue and is slightly superfluous.”