The racist graffiti was found by a BME student

The words “WHITE POWER” were graffitied on a laundry room whiteboard in Emmanuel’s Blantyre accommodation this week, it has emerged.

The statement was discovered by a BME student at around 7:30pm on Monday 24th February. The student in question, who would prefer to remain anonymous, told The Tab Cambridge: “When I saw the words ‘WHITE POWER’ written on the whiteboard of our laundry room, it was a reminder of the racism that exists in Cambridge but mostly goes unnoticed or unvoiced.

“The senior leadership team at Emmanuel and ECSU have responded brilliantly and professionally to this event, but the process of reporting the incident exposed the ignorance of most of the white student body to the level of hurt and distress racist incidents like this cause BME students.

“On the evening of the incident, I did not feel safe in my own house. It is very unsettling to see such an experience be trivialised. Though there were a number of messages of support, there was also the sense that it was broadly seen as the newest gossip around college. It is of utmost importance that every student at this university is aware of their responsibility to call out racism, no matter their own background, so that this does not recur.”

Emmanuel College’s Senior Tutor issued a statement to students, saying: “I have previously deplored the abuse directed at Asian students in the streets of Cambridge, and, sadly, in at least one College too, following (in the twisted logic of xenophobes and racists) the threat posed by the coronavirus outbreak.

“But this is much closer to home, and obviously even more disturbing. This causes real fear and distress, and it is compounded by the thought that not everyone might take this seriously, or would seek to trivialise the concerns of BME students and others. Anyone who knows anything about this incident should contact their tutor, or me directly, or indirectly via one of the ECSU team. This can be passed on to the Police”.

The email continued: “As I have previously stated, we have a duty to be vigilant against racism, and that means supporting those who report it and who seek to make the College a better place.”

The Senior Tutor concluded by reiterating that “all students have a responsibility to report hate speech and hate crime”, adding that these can be reported not only to the College and the University, but also to a range of different organisations, including: Stop Hate UK, Tell Mama (anti-Muslim hate crime), Community Security Trust (anti-Semitic hate crime), GALOP (anti-LGBTQ+ hate crime) and True Vision (all hate crime).” 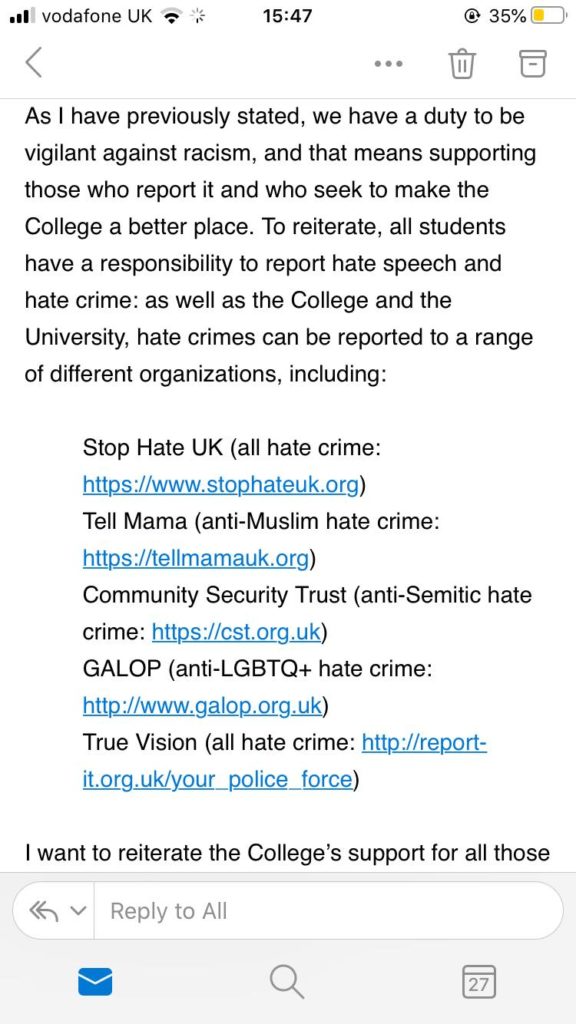 From the email sent by Emmanuel’s Senior Tutor, with links to organisations that fight hate crime

He added: “I want to reiterate the College’s support for all those who suffer from such abuse, and for those who have the courage to report it.”

Emmanuel College Student Union (ECSU) also issued a statement regarding the racist incident. ECSU writes that this “caused immediate distress and upset to the student who found the message, but also to the wider BME community at Emma. ECSU would like to express our disgust and serious concern that this has happened in college accommodation where all students have a right to feel safe. This incident is being treated with utmost seriousness by the senior leadership of college and ECSU, and we are working together for a strategy moving forward.

“We’d like to echo the Senior Tutor’s message that such incidents are serious enough for police intervention and that all students have a responsibility to report hate crime and hate speech.”

They added: “If you have any information about this incident or any other instances of racism in college, the university and the wider community, please notify the Senior Tutor or a member of ECSU”.