“Rust” and the representation of mental health in theatre

We spoke to the production team

Ahead of their upcoming musical, "Rust", we talk to the writer, Helena Fox, and assistant director, Izzy Collie-Cousins, about their production and the representation of mental health in theatre. Based on real events, "Rust" follows the story of Evie, a girl recovering from a mental health crisis in a rehab centre. The play offers a glimpse of the recovery process of the various characters she meets over the course of a month there.

What is "Rust" about and why did you choose to put it on in Cambridge?

Helena: "Rust" is about the month the protagonist, Evie, spends in a rehab centre after reaching a crisis point with her mental illnesses. It is ultimately a musical about the process of recovery: its crushing lows and euphoric highs. It’s about rediscovering the possibility of life after mental illness and the joy of human connection despite mental illness. I had seen and loved shows like the (incredible) ‘Next to Normal’ which focuses in on mental illness and its repercussions but was really keen to write something that has recovery at its narrative centre. "Rust" is largely based on my own experiences and so is a sort of ‘eyewitness’ account of rehab.

We knew we were taking the show to the Edinburgh Fringe and were really keen to be able to bring it to a Cambridge audience, too. I really hope that "Rust" can give some hope to those in Cambridge who have experienced or are experiencing mental ill-health, and that it can give insight, too, to others. While mental illness is obviously so unique to everyone who goes through it – and I would never say I’ve created any sort of ‘blanket representation’ – I really hope the themes resound with Cambridge audiences like they did at the Fringe. On a more personal note, I was also really keen to stage "Rust" in Cambridge so that the friends and academics here who have played such large roles in my recovery would have the chance to see it. 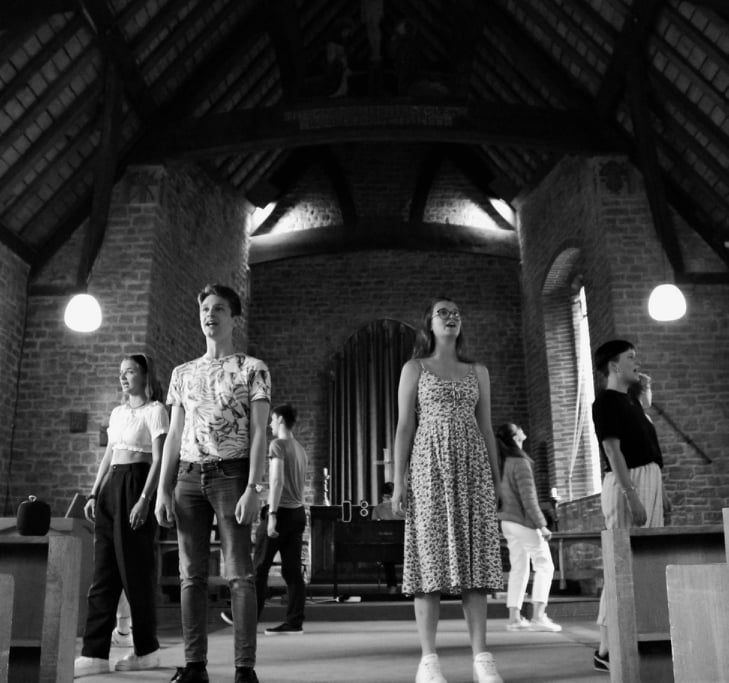 How do you go about portraying characters with mental health issues on the stage?

Helena: A big part of this has been trying to balance the very real and tangible presence of these characters’ illnesses alongside their equally real and important personalities and individualism. We’ve been really conscious of not shying away from or glossing over the truly destructive consequences mental illness can have, but at the same time have aimed to create rounded, funny, vibrant, complex, loving, vulnerable characters. It is also the case that in the setting of the rehab centre the characters’ lives do revolve around their illnesses, because that is why they are there, but simultaneously this obviously doesn’t prevent them from developing wonderful relationships with each other or discovering what life might look like after they leave hospital.

I have been so incredibly fortunate to have such a wildly talented cast with whom to craft these characters, as well as the direction from Geraint Owen and Izzy Collie-Cousins for the Fringe run and Izzy and Katya Bookchin as assistant directors for the Cambridge run, as well as musical direction from Sam Macdonald and Georgia Rawlins throughout, all of which has contributed to a vast range of insight and perspective coming to these characters. All in all, I really hope we have portrayed the group of big-hearted characters I set out to write, and that I have done justice to the wonderful people I met when I was in rehab.

"Rust" is set in a rehab centre. How did you create this environment on stage?

Izzy: Building a rehab centre on stage wasn’t something we deemed necessary or practical as a Fringe run coming to the ADC. Part of the point of "Rust" is to resist stereotypes of rehab and mental illness, and I have always felt that to depict a rehab centre literally would inevitably play into one preconception or another to undermine that intention. Therefore, Michelle Spielberg (set designer) has instead created a beautifully simple set that incorporates symbolism, consistent to the Fringe run. Most prominently, this is the rusty brown texture that creeps up the sky-blue door to the rehab centre, referencing Evie’s (the protagonist) confession that her mental illness feels like “rust edging up [her] spine”.

Through working on "Rust" and talking to Helena about her experiences, it has become clear to all of us that rehab is more than just one setting. There are the moments of being an anonymous patient in a file and of being spoken to with clinical empathy, but there are also passionate outbursts, quiet contemplative conversations, and delirious fun. Ruth Harvey’s (lighting designer) sensitive lighting choices showcase the versatility of Michelle’s set, as the audience traverse this range of atmospheres and moods without ever feeling out of place or feeling like any of it is unnatural to rehab. 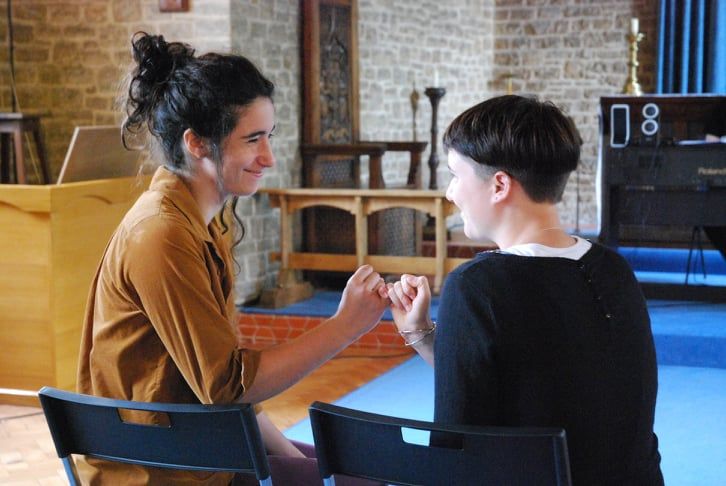 "Rust" is a musical. How are you using the musical genre to convey heavy and important themes?

Izzy: I will admit I initially thought a musical set in a rehab centre might be a little incongruous or even inappropriate – we broadly consider mental illness a solemn and taboo topic. However, the more you think about songs such as ‘As Long As He Needs Me’ from Oliver!, ‘Stay With Me’ from Into the Woods or ‘Your Daddy’s Son’ from Ragtime, you realise it’s incredibly common for musicals to deal with the dark and difficult aspects of human nature with remarkable nuance. It may be unusual for them to discuss mental health so explicitly, but this is precisely why "Rust" is necessary.

I don’t think we could have brought the intense emotions to the stage without music as the driving force. Musicals are highly liberating for such an emotional topic: characters can be more forthcoming; you can use imagery or metaphors that would be impossible to incorporate into naturalistic speech. Moreover, the use of musical motifs individually or intertwined is used throughout the show to signify changes in mood and setting. Also, the songs are just catchy. Katya Bookchin (assistant director) only had to hear ‘Fire’ once to have it stuck in her head for a week. These songs are used to channel some of the most despairing moments in the show, but also some of the most fun and most hopeful. They channel the audience’s catharsis in the auditorium and beyond. 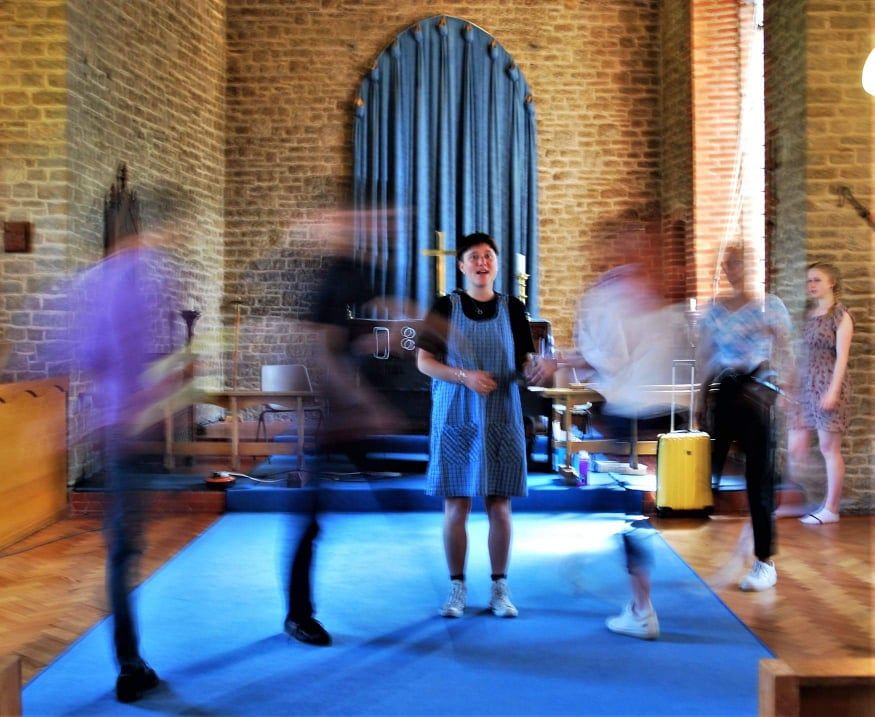 Do you think the issues explored in ‘Rust’ are relatable to Cambridge students?

Izzy: Absolutely. The focal message of "Rust" is that no destructive behaviour should go unchallenged, and there is no need to reach rock bottom before trying to recover. It isn’t radical to say that the culture of intensity in Cambridge encourages this behaviour to be overlooked to the point of crisis. Evie’s experiences in particular will resonate with a Cambridge student audience – her academic achievements have masked her illness for so long, it seems barely possible that she could be “sick enough” to require treatment. In Evie we see both ourselves and our friends reflected in startling technicolour – we empathise because we know that mindset all too well, and in turn are forced to empathise with ourselves. This is not only true for Evie, but for all the characters, whose candid dialogue surreptitiously pierces to the core of many unhealthy rationales.