Given that all I had heard about The Deep Blue Sea was that it focused on a suicidal woman entangled in a destructive affair, it is fair to say that I was unsure whether I would enjoy this play.

Sure, Terence Rattigan’s tragedy has had many critically-acclaimed productions in the past. After its first performance in 1952 the critic Harold Hobson called it ‘the best English play in the naturalistic manner for a very long time.’ Critics, however, are so-often fixated on whether a play is intellectually compelling. As a tired student on a Tuesday night, I was less interested in whether what I was going to watch would interest me, and more concerned about whether it would entertain me. Luckily, all my apprehensions were firmly brushed aside by Mariam Adbel-Razek’s powerful production. It was a pleasure to sit in the audience and watch the brilliant cast create a kaleidoscope of vividly human emotions, and I certainly felt every single one of them. 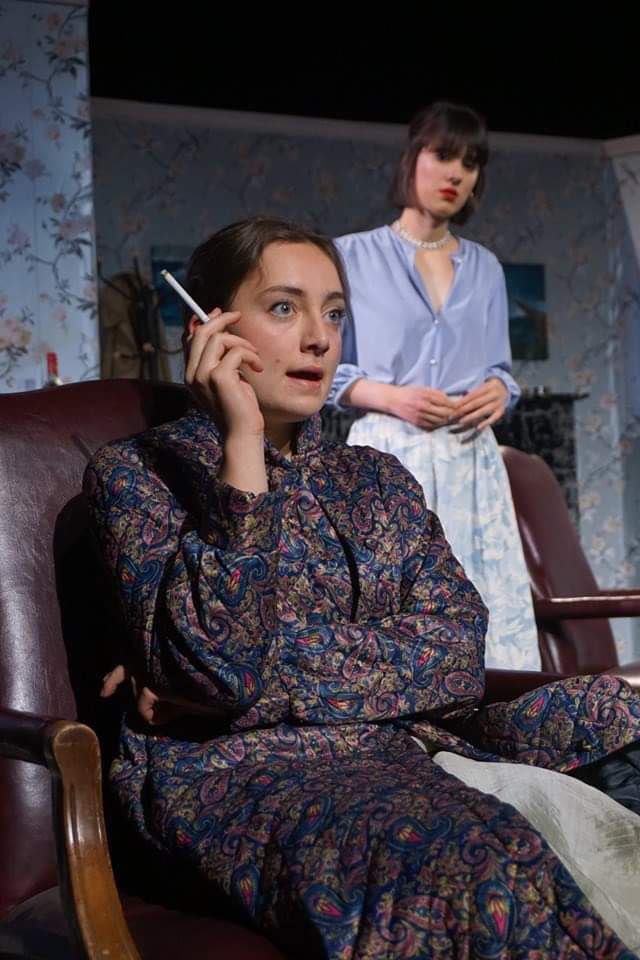 The play focuses on the attempted suicide of Hester Collyer, who is magnificently played by Clara Morel. Married to William Collyer, a respectable judge, Hester removes herself from the security of such a relationship by pursuing a volatile affair with Freddie Page, an erratic, alcoholic pilot. This is the deep blue sea Hester finds herself in. With no anchor and no sight of land, she treads water throughout the play as the tide tries to tug her beneath the surface. Ben Galvin’s Freddie Page offers Hester no rudder or compass, instead he casts her into the depths again and again. When Mr Collyer asks his wife why she tried to take her own life, the answer Hester gives him is “Oh dear, oh dear, I don’t know. A great tidal wave of illogical emotions.” Indeed, Rattigan expressed that evoking “the illogicality of love and passion” was his aim in The Deep Blue Sea. 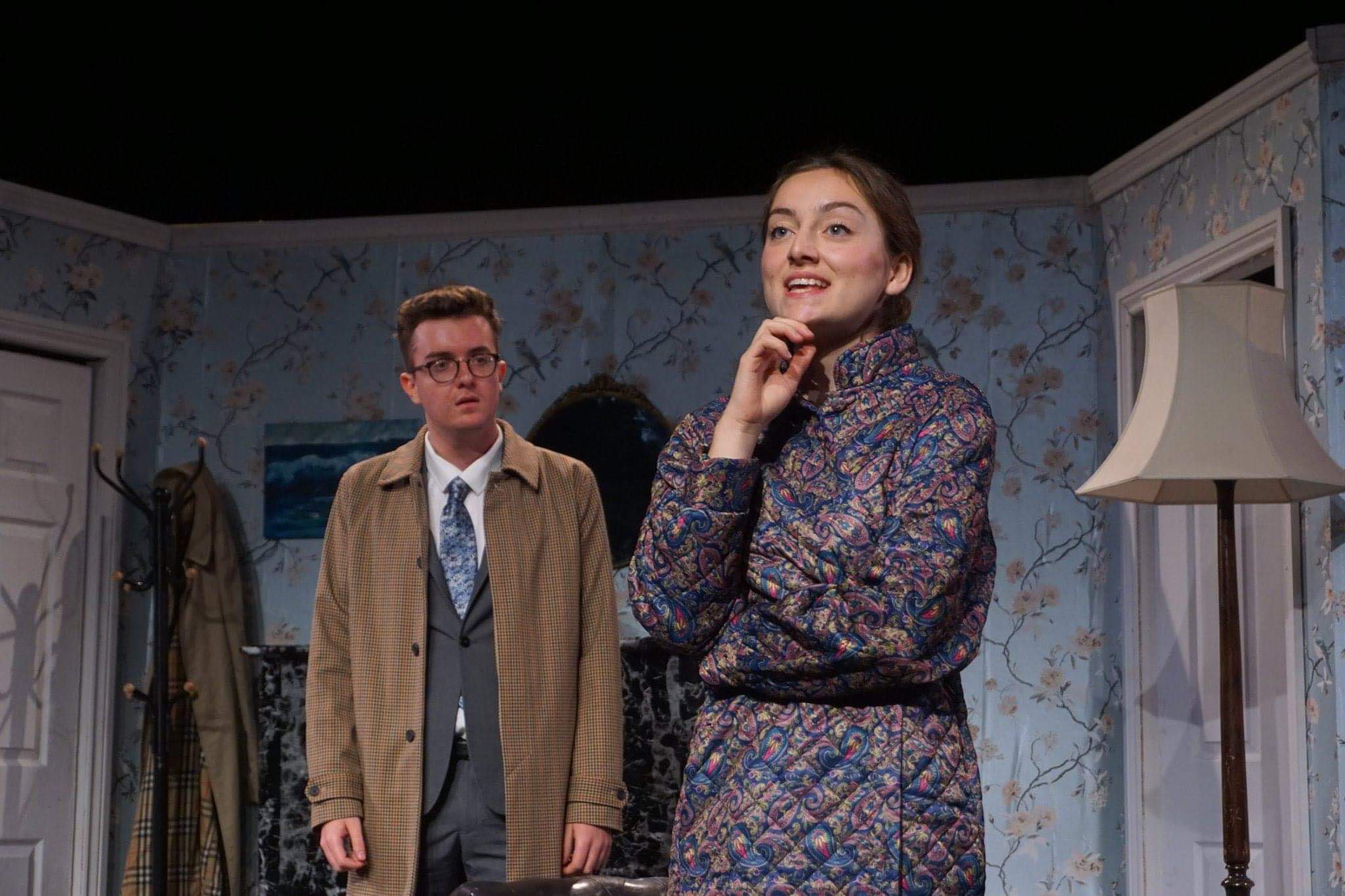 Clara captures Hester’s desperate unreasonableness poignantly. There is a significant inner-tension in the character of Hester between naïve stoicism and the crushing sadness of one whose love is not reciprocated. As she, like Lazarus, rises from her bed after her attempted suicide and strolls confidently and chirpily into the living room to the comedic surprise of Mr and Mrs Welch, Clara illustrates such a tension perfectly.

The optimistic tone of her reassuring words is betrayed by Clara’s wide, unflinching eyes as she moves to the front of the stage and stares into the distance. As she holds a cigarette casually, albeit shakily, in one hand and the smoke rises in blue billows in front of her face, the audience is shown very clearly that all is not calm at sea. This happens frequently throughout the play. A chair sits cleverly at the front of the set, beside which stands a table with a telephone on it. The fact that this part of the stage is spotlighted is a brilliant decision by the production team as it creates a space between the audience and the set. 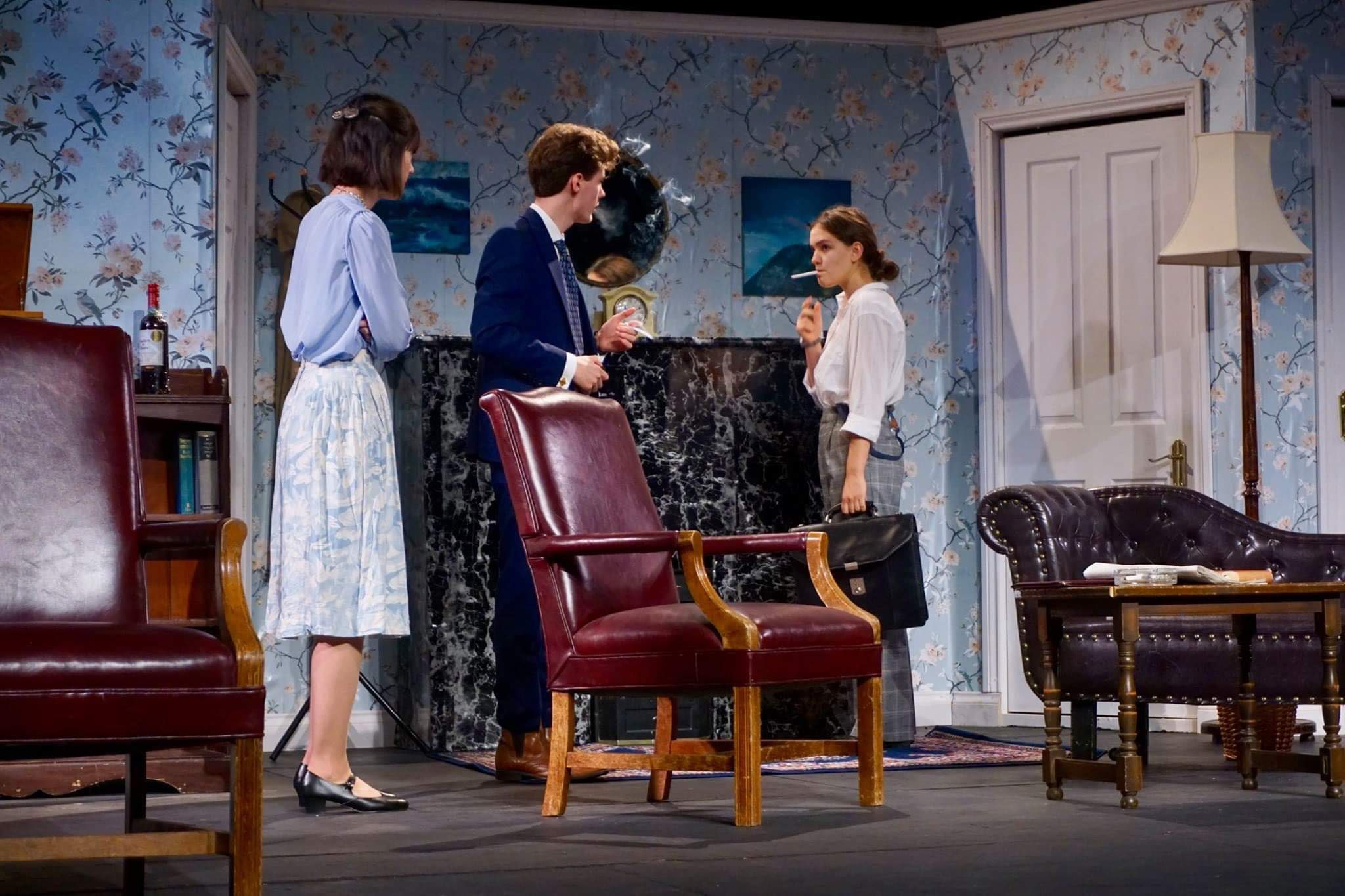 Hester returns to this spot again and again and again, her eye contact directed towards the audience and not towards the character currently addressing the back of her head. We see her pain very clearly while the other characters are required to clamber over a wall of false reassurance to find the real feelings behind. Clara perfectly represents a soul in turmoil, returning to the phone more and more frequently as the play progresses, seeking comfort which she does not accept is futile. Her hand gestures are captivating as she fiddles with the phone cord, then claws at her stomach, then rests her hand upon her hair only to retreat back to resting it on her stomach again. Here Clara seamlessly yet convincingly moves from anxiousness, to animation, to desperation, then sadness, silence, excitement and a final crushing despair as the phone cuts off, Freddie disappearing with it. 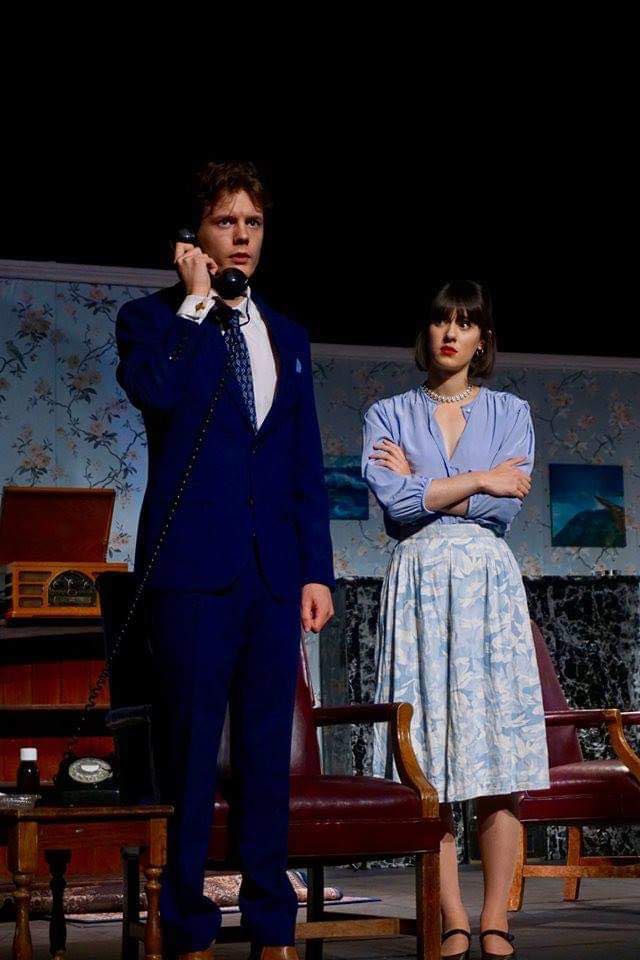 Ben Galvin’s performance as Freddie offered the perfect juxtaposition to Hester. Galvin injected Freddie with fervent energy, care-free garrulousness and tempestuous anger. This made the monotony of Hester, who appears sapped of any thirst for life and full of a sad desperation, all the more startling. Ben’s reading out of Hester’s letter was a particular highlight in which his resentful, slightly mocking tone demonstrated Freddie’s eagerness to be seen as the victim. The guileless lecture Leon Hewitt’s Mr Welch gives to Hester about an actress he once foolishly fell in love with is a humorous highlight in a play where comedy, for good reason, was lacking. Sophie Kean’s performance as Mr Miller offered a breath of sanity and reason in a play where many of the characters were far from grounded. In a particularly well-performed scene, animated in her conviction of Hester’s worth, Kean kneels down next to the spot-lit chair trying to stir Hester into life through a moving speech.

The action of the play almost entirely takes place in Hester Collyer’s dingy middle-class apartment in Ladbroke Grove. Everything here is strikingly blue. A sky-blue floral wallpaper covers the expanse of the backdrop, dotted with blue seascapes and deep blue curtains. Philip Welch wears a navy suit and tie while Ann Welch is bedecked in light, silky azure. Eliz Avni’s Mrs Elton pads around frantically in dark blue slippers while Hester is wrapped in a thick navy-paisley gown for the duration of the opening scene. Sitting in the audience as the lights dimmed, my eye was drawn from blue to blue, and the melancholic appearance of the set communicated a sorrowful note before a word was even uttered. 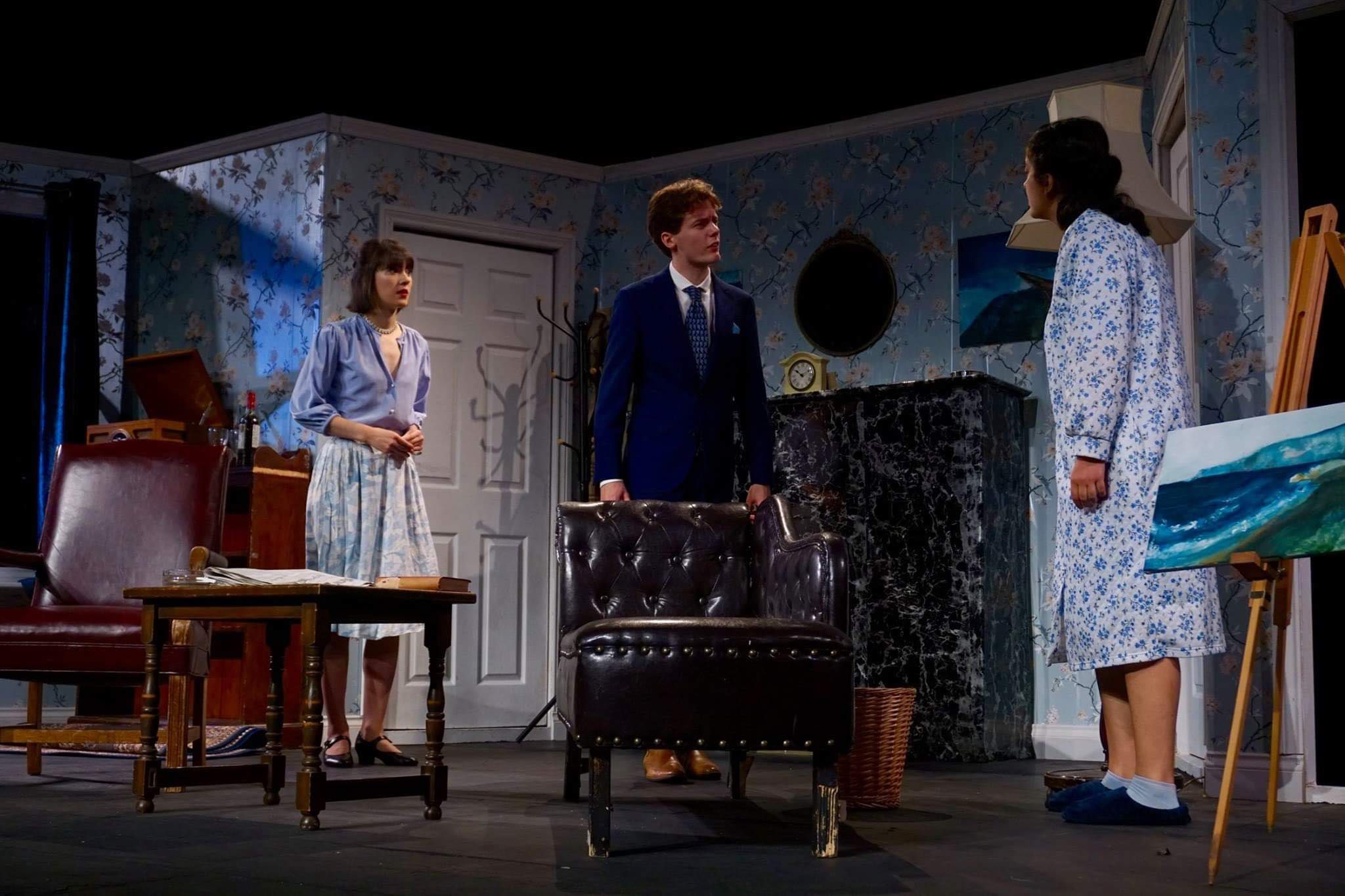 The play was a fairly sobering experience. I left it feeling quite upset: and, naturally, immediately bought myself a ticket to the Footlights Smokers to cheer myself up. It is a tragedy after all though. A criticism would be the way in which the play was split up. As the curtain descended with the sound of Hester’s voice desperately pleading to Freddie off-stage “Don’t leave me! Not tonight!” I thought the play was over. It seemed a long first half and parts of it dragged on slightly. Perhaps some cutting was in order. I felt somewhat drained at the interval, but I was pleased there was a second part as the acting only got better.

You certainly won't regret a trip to see this play. You will be moved and provoked into all kinds of emotions through the fantastic quality of acting. It’s definitely one not to miss.