Rather than “Once Upon A Time”, the theme of John’s opening was closer to the Book of Genesis when torrential rain began to douse the huge Queen’s Road queue. What must have been originally envisioned as a Hansel and Gretel-esque traipse through a sylvan glade had become a sodden trudge. As ponchos ran out and mud entered open toed shoes we reminded ourselves that John’s can hardly be blamed for the wet, but they could certainly have better prepared after weeks of similar weather. Entering the ball at long last felt as though we guests were being evacuated from an impending disaster as stewards frantically poured out fizz whilst guests rushed at unseen canapés in a blacked out tent before being hurried down yet another muddy path.

Thankfully the rain abated, and the sight of New Court lifted everyone’s spirits, seemingly designed for such an event and spectacularly lit up. Guests made grabby by the weather assaulted Aromi and Wildefeest where Aromi’s new mini pizza (also seen at Pembroke) sent the crowds into hysteria. 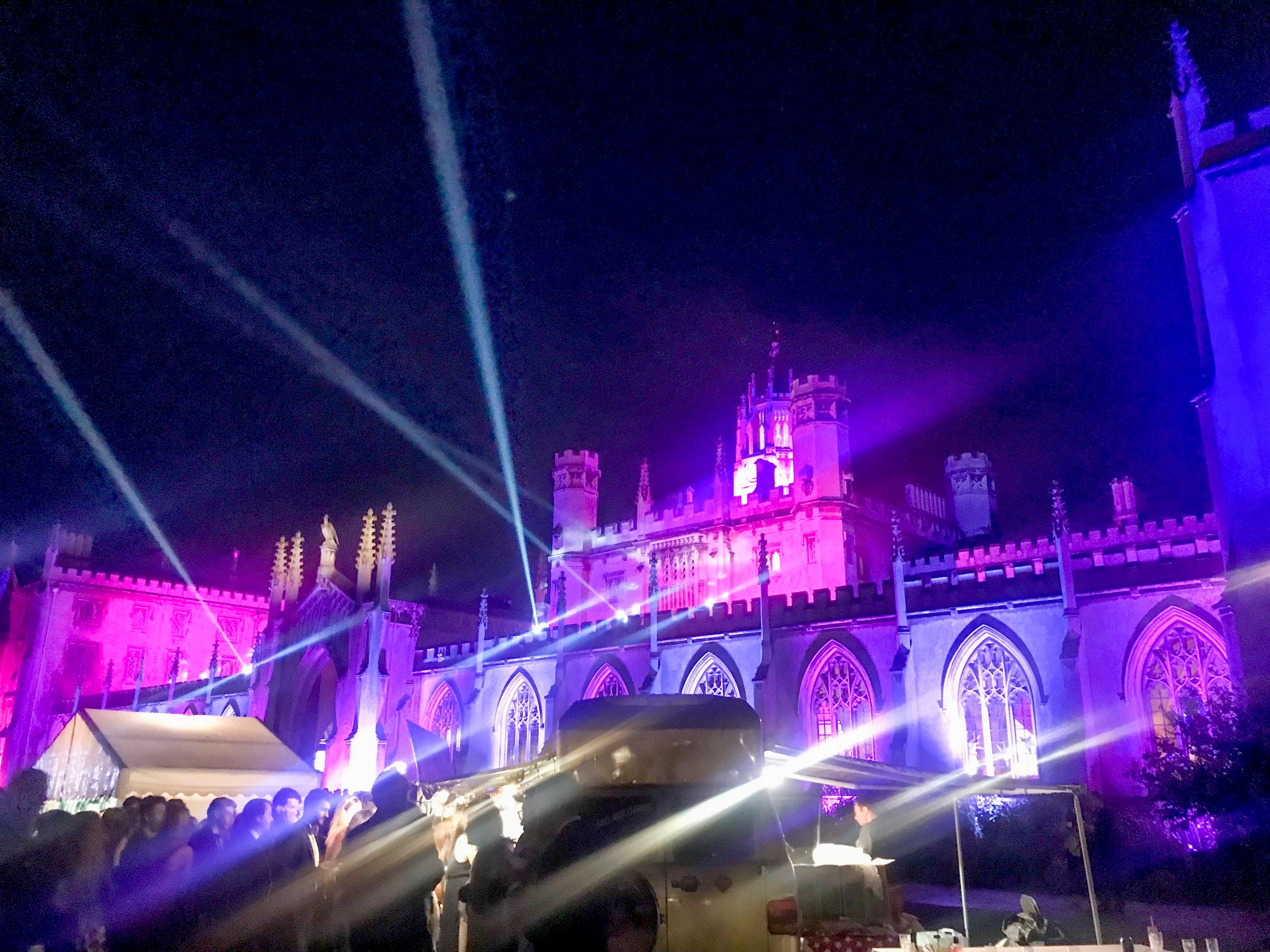 One of the most iconic sights of May week

Third Court, my favourite of the evening, had pick’n’mix as a nod to its Hansel and Gretel theme and was host to the rather bizarre but wonderful concept of a “donut wall”, where a selection of freshly fried and sprinkled delights were being continuously hung like ornaments. The “Jagerbread House” served unlimited tequila slammers and jager bombs with aplomb and was well placed at a hub of movement to keep spirits high throughout (ahem). The nearby Rave tent gave a buzz to the whole area with Sam Sieger’s graveyard shift memorably reanimating a packed tent, a definite highlight.

John’s fireworks were spectacular, big, loud, in parts moving as well as cheer-inducing, the better of all other May Balls save one. Unfortunately John’s and Trinity’s arms race has had closer years. It feels wrong to critique such a fabulous display, but there was less of the razor sharp synchronicity of bang to music that astounded next door (watch it here). No flames, light show or lasers which in the past Johns has fielded. The tracks being not quite as well mixed, at times the energy was flagging, with Swan Lake nearly botched with war-zone kablammo until a fabulous climax meant all was forgiven. 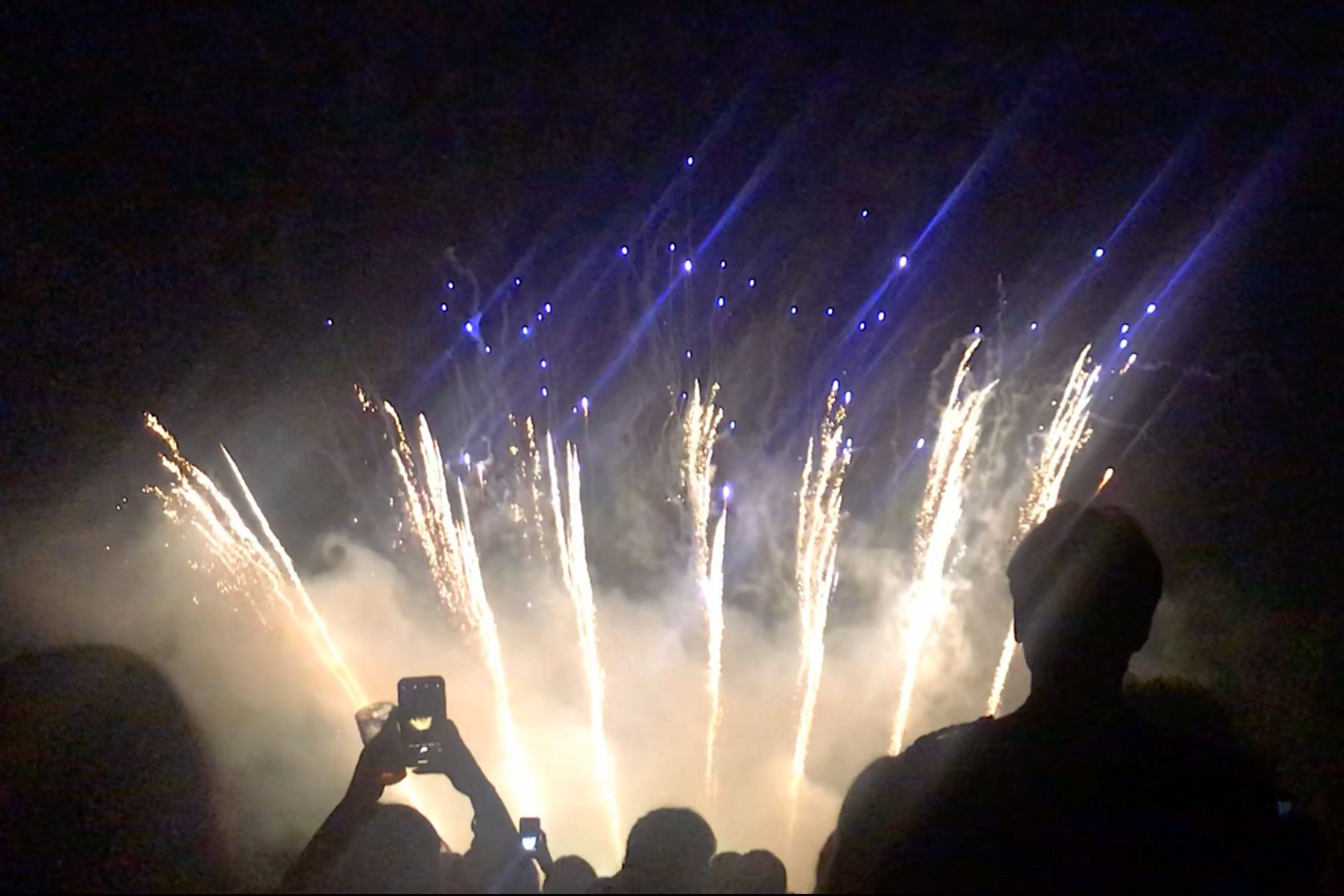 On to Second Court, where the fairy tales crossed continents to China. A gigantic and impressive framed structure adorned with huge Chinese lanterns straddled the central paths, intended to provide a Far Eastern backdrop to Lion Dancers, noodle bars, fortune cookies and…paella. Regardless of the cultural confusion, it was excellent.

Tasty Vita cocktails in hand we skipped to first court, pausing to sample a rather standard selection of cheeses in the Knights of the Round Table themed Hall where a popular CUDT salsa class and performance was drawing the crowds. The culinary highlight was to be found in the Wizard of Oz-themed First Court, below a giant projection on the chapel. Delicious and generous slices of freshly cooked steak served on a cone of french fries. Sometimes simplicity can win the day when it’s of this quality. A very nice and spacious Variety Tent hosted a well rounded line-up all evening, though the Three Mystics supposed to read our fortunes seemed to have vanished in a puff of green smoke. Unwittingly blundering into the 1888 Society’s private party led to the drinks highlight at the Pol Roger Champagne Presentation. A treat the whole May Ball deserves? 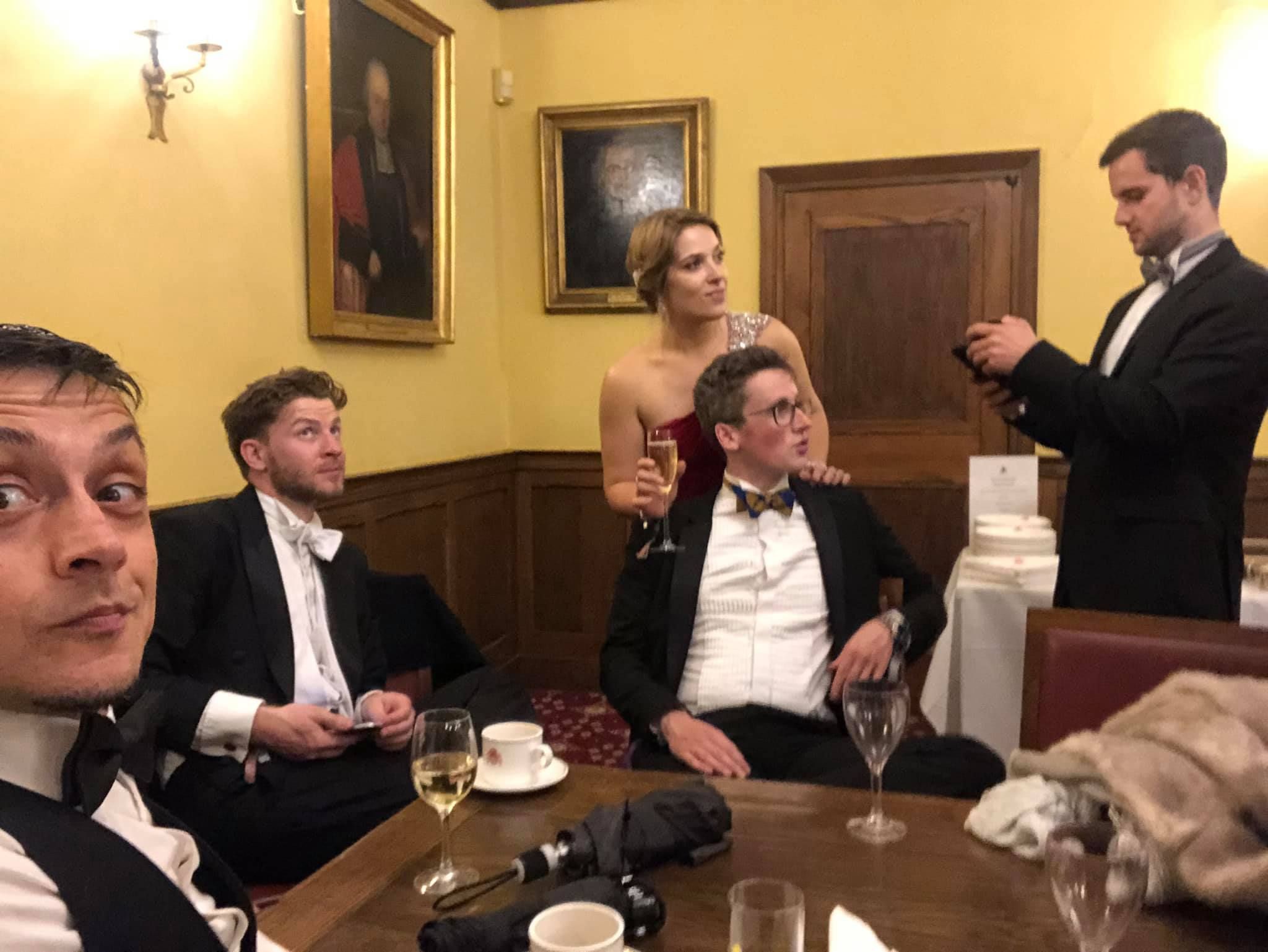 It was time for Pixie Lott on what is surely the best location for a main stage at any May Ball, Oxford or Cambridge. The interior of New Court was an amazing setting for a popular headline act, even when the rain came down again it couldn’t dim the crowd’s enthusiasm. Massaoke would later draw similar numbers for crowd-pleasing singalongs to our favourite covers.

The Backs entertainment included Escape Room games and a Magic Tent that was highly commended from what I heard, though the wooden mini golf was just that and the dodgems were a bit on the slow side. The Silent Disco redeems all however, and though headphones were in short supply, this can only have been due to the sheer popularity of this tent. As the sun came up and we raved unselfconsciously on the Backs, nearly drunk, very full and very satisfied, we knew it had been a fairy tale come true after all.

Johns may not have been consistent, but it was vast. The sheer breadth and quantity of stages, food and drink was astonishing. The rain may have rendered it more difficult to match the sedate pleasures of Trinity, but Johns had all the more buzz for the thrill seekers ardently trying to see and do everything.