An admin’s ode to Crushbridge

From the undercover creators, Dora and Hollie

You may be wondering why Crushbridge has been alarmingly quiet this term, and that is because its admins— us, hello! —have been caught in the slog of finals. Turns out juggling hundreds of digital love letters with our degrees is not as easy as it once was.

Inspired by London's 'rush-hour crush', as well as Cambridge's excruciatingly awkward dating scene, we set up the page in our first year for a bit of short-lived fun and warranted procrastination. Two years on, we are still amazed by the longevity of Crushbridge, the replica pages springing up for other universities and the ability for the posts to touch people's hearts (and other reproductive organs). We were once even mentioned in The Times.

Crushbridge is a platform that we may have started, but the students of Cambridge have made. ‘If I don’t get a Crushbridge for this outfit…’ we have become accustomed to hearing in the Sainsbury’s queue, whilst our phones buzz with yet more submissions. Wordsmiths pour out empowerment and positivity for university teams; protestors and performers; regular old faces in the crowd. Some submissions have reunited people with their missing keys. We have passed on messages of solidarity from one poster’s inbox to another. This is bigger than letting someone know you like the look of their face (though that is appreciated too).

We decided to keep our identity as admins a secret, telling only a select handful of friends as the months passed us by. Even now, we still get a thrill joining in on conversations about the page whilst remaining incognito.

However, with our graduation rapidly approaching, it's time to pass on the baton.

We're looking for a new group of people to manage the page and keep the lurrrrve going. Sounds good, right? Get in touch with us at: [email protected].

Cambridge, this is our Crushbridge to you.

Only 2017 babies will remember! There was a period of time where an elusive 'Hot Maths Library Girl' pervaded our submissions box. To this day, we still do not know who she is.

This post, which is too long to include in one screenshot, captured the attention of one aspiring filmmaker and won the hearts of Cambridge students alike. 2,000 to be precise. 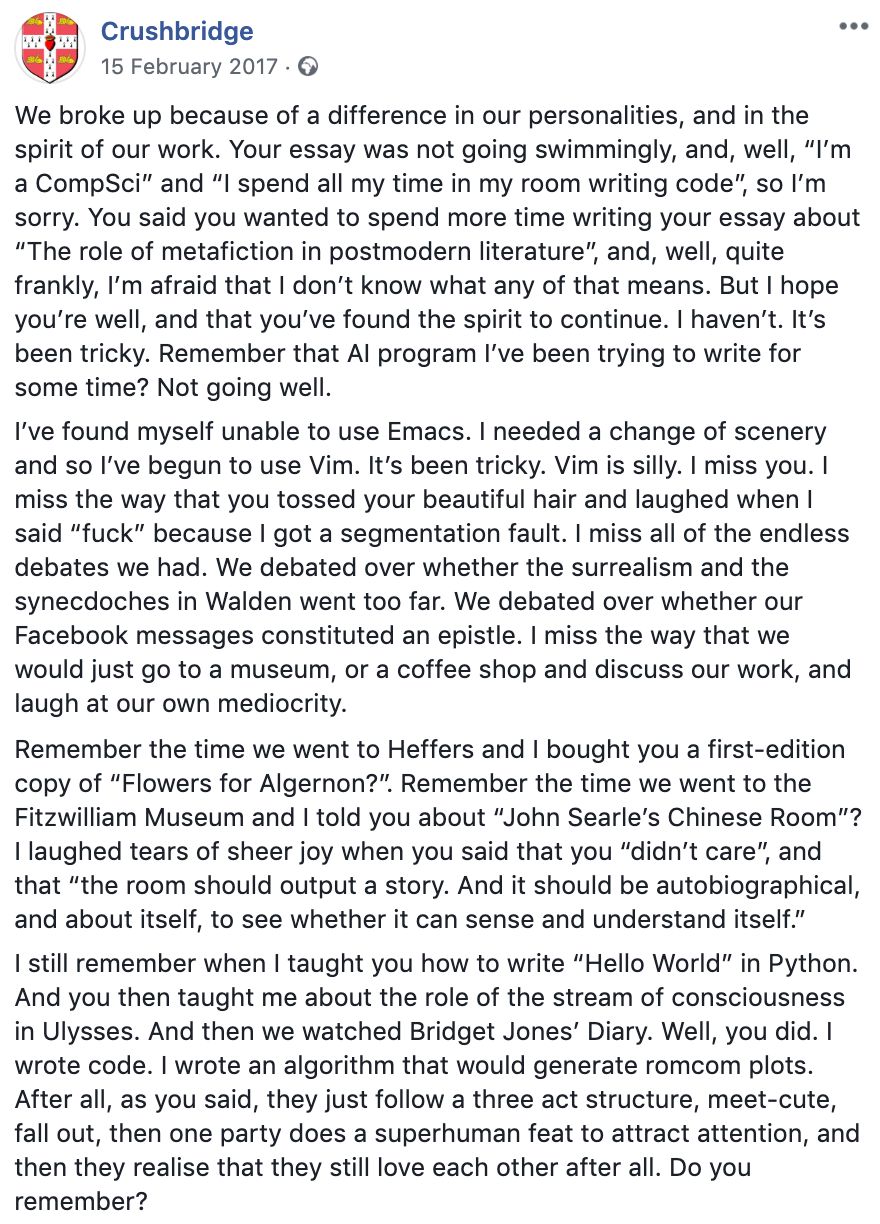 Running commentaries in the DMs have been a profound source of entertainment.

It was a surreal moment discovering a page that was auto-generating avant-garde submissions from our posts. T.S. Eliot eat your heart out.

When we each got a Crushbridge

Dora was spotted crying, Hollie had pink hair. It was a dark time.

And thus ends this ode to love in the cyber age.