The University Labour Club has instead made Dianne Abbott, Muntadhar Al-Zaidi and Marielle Franco their new honorary presidents

CULC today issued a Facebook post and tweet revealing that they have stripped Alistair Campbell, most famous as Tony Blair's spin doctor when Labour was last in government and the most probable inspiration for The Thick Of It's protagonist Malcolm Tucker, of his honorary presidency on the basis of his "central role as Tony Blair’s chief strategist in the invasion and occupation of Iraq" which "should rule him out of any serious role or prominence in public life."

From this, it can be inferred that CULC believe that Blair and Campbell are war criminals.

One anonymous member of the current committee told the Tab :

"Well the statement was in the group a few days back, and asked for issues. But like everytime someone actually brings an issue up it either causes an argument and nothing gets resolved, and like some people definitely had issues with it but stayed silent"

When pressed as to whether the club's Tweet could be construed as unprofessional due to the images used, the anonymous committee member went on to tell the Tab:

We have removed Alastair Campbell (@campbellclaret) as one of our honorary presidents. Our three new appointments are, in no particular order:

This replacement of a more centrist Labour figure as one of CULC's honorary presidents, with more left-wing figures mirrors changes in the character and membership of CULC since their end of term meeting in Lent. Since the Lent 2019 elections, the current CULC committee appear to be further to the left than those previously, as Momentum-aligned Labour members have proliferated the committee.

The Tab has heard from members of CULC from Lent that the left-wing takeover of the committee was seen by many as a coup, and there have been allegations of factional bullying with some former committee members being driven to tears. The Tab has heard these allegations from multiple former/current CULC members, and they have been privately substantiated by these CULC members, including from the individual in question.

The new chair, Jack Chadwick, describes themself as a communist in their twitter bio. CULC actions under their chairmanship include using hammer and sickle iconography and tweeting about Lexit, a controversial position as the vast majority of Labour party members across the country are in favour of a second referendum and remaining in the EU.

Chadwick, in a statement offered to the Tab has said:

"As The Tab have made clear in their private correspondence with us, the allegation of bullying is not directed at any single person or group within the club. The tone of the meeting was confrontational and at times unpleasant, members on both sides of the political divide were upset at how things proceeded, myself included. I'm not personally aware of anyone crying but this is a totally fair response to losing an election or seeing your friends lose. Everyone in the club must make more of an effort to ensure that our internal democracy is conducted in a comradely way."

This has caused fall-out within the club, with Chadwick and Ellie Brain (Fitzwilliam JCR president and former Women & NB officer at CULC) having a public twitter disagreement over CULC's campaign in the recent local elections. The Cambridge University Labour Club has become much more factional. 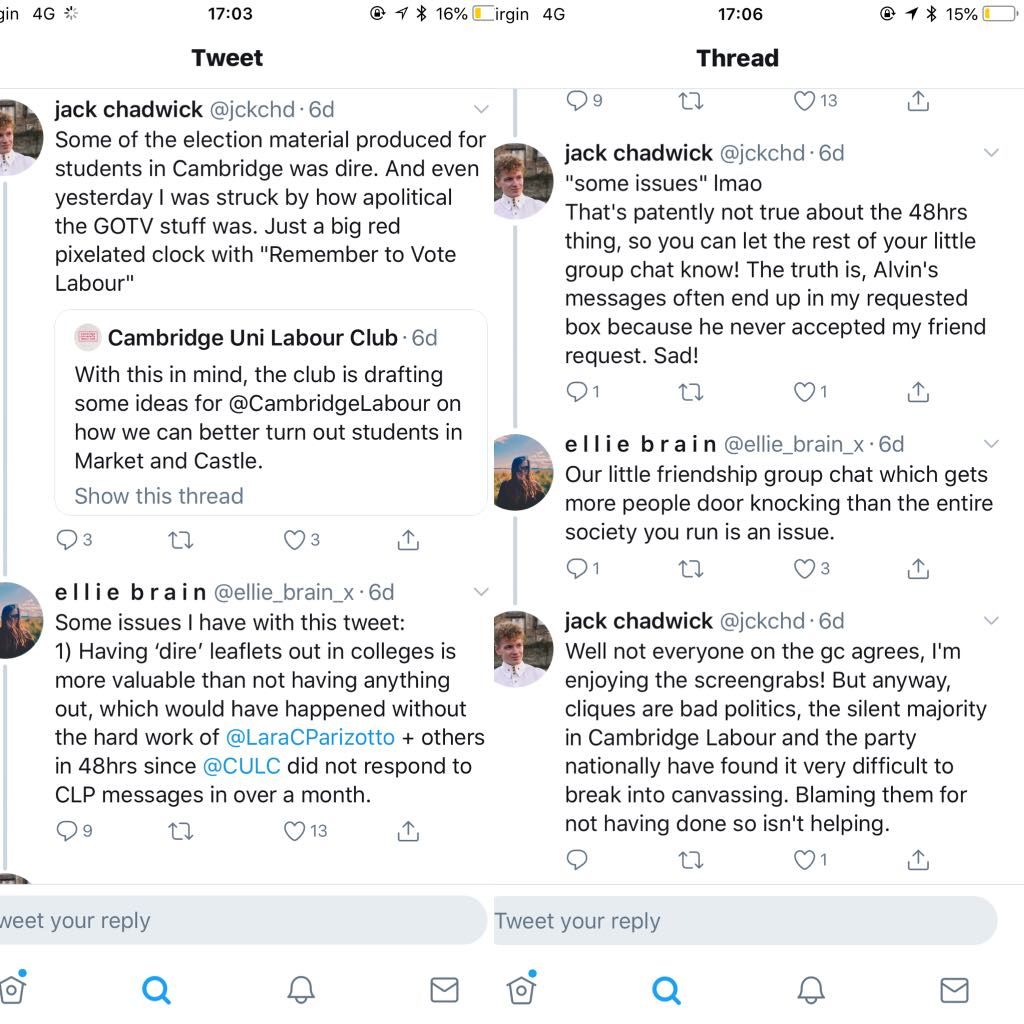 Moreover, some issue was drawn with CULC's use of quotation marks when referring to the 'People's Vote' campaign. As was mentioned previously in the article, new CULC committee members have at times come across as supportive of "Lexit", or "left-wing Brexit" on their social media. This can be seen as further evidence of a move to the left within CULC since the Lent elections, with many on the left of the Labour party viewing the People's Vote movement through a factional prism due to the involvement of figures such as Campbell, Chukka Umunna and Tony Blair within the movement.

This issue has attracted the attention of the wider university, most notably the Flat Earth Society, who commented on CULC's announcement post "and I thought we were a good parody page". 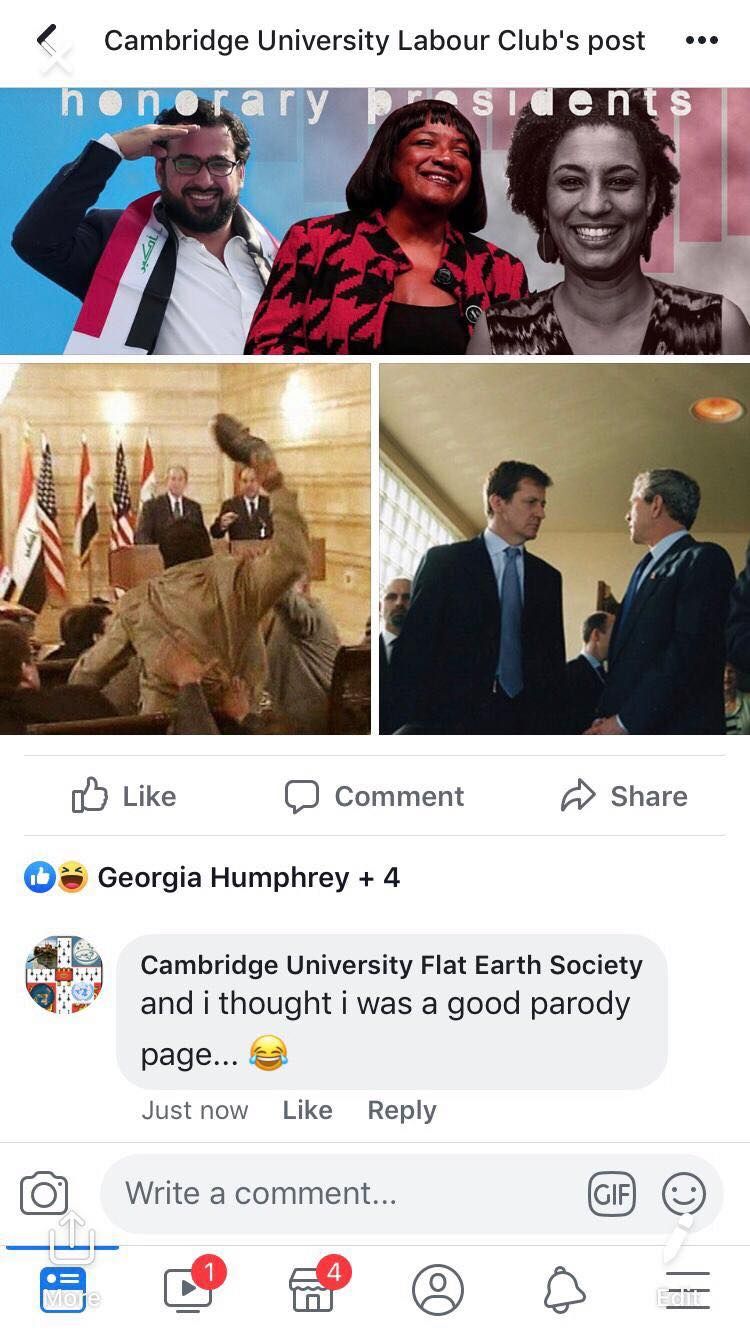 It seems that the Flat Earth society has taken particular issue with the matter, commenting on the situation and claiming to have been banned from the CULC page. 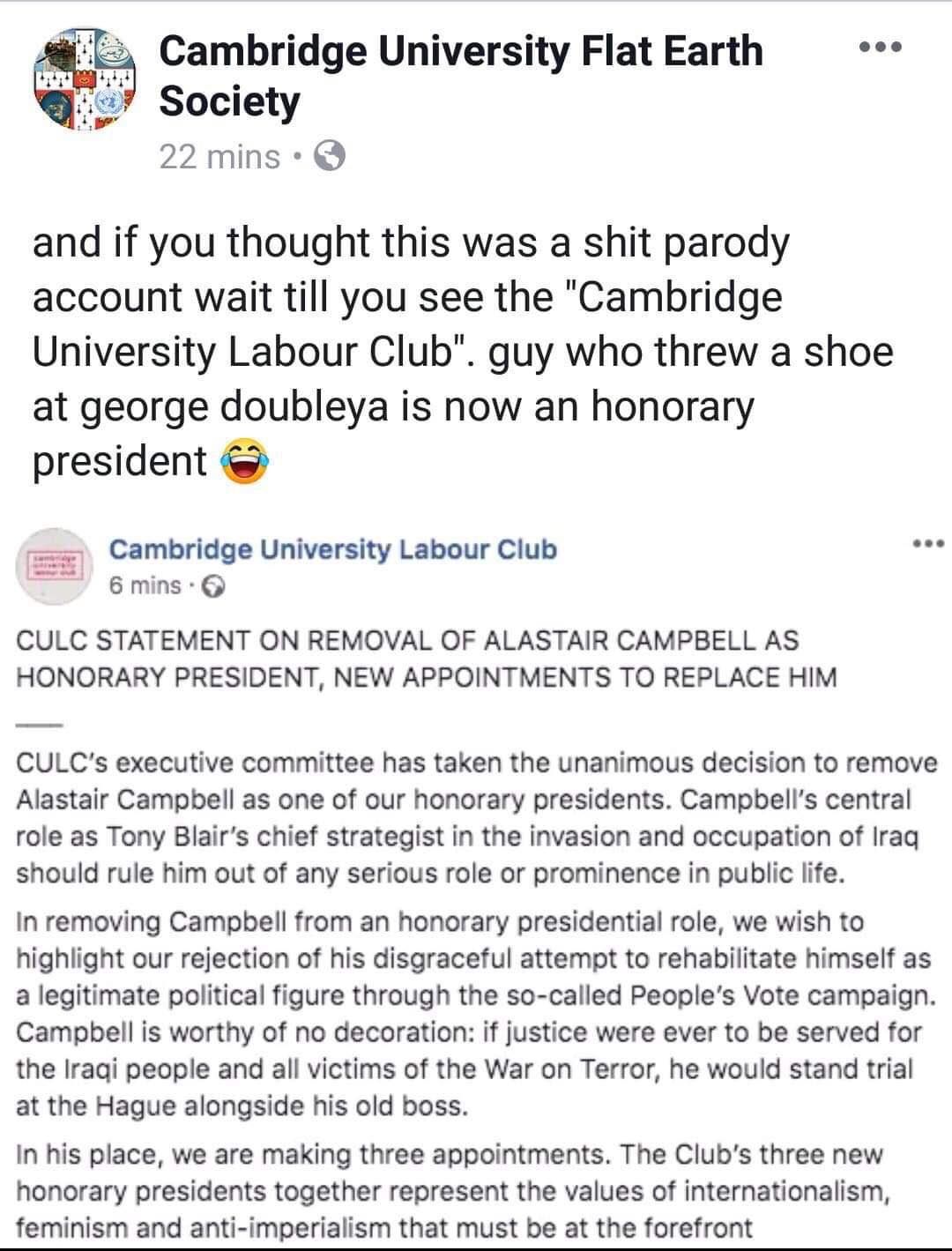 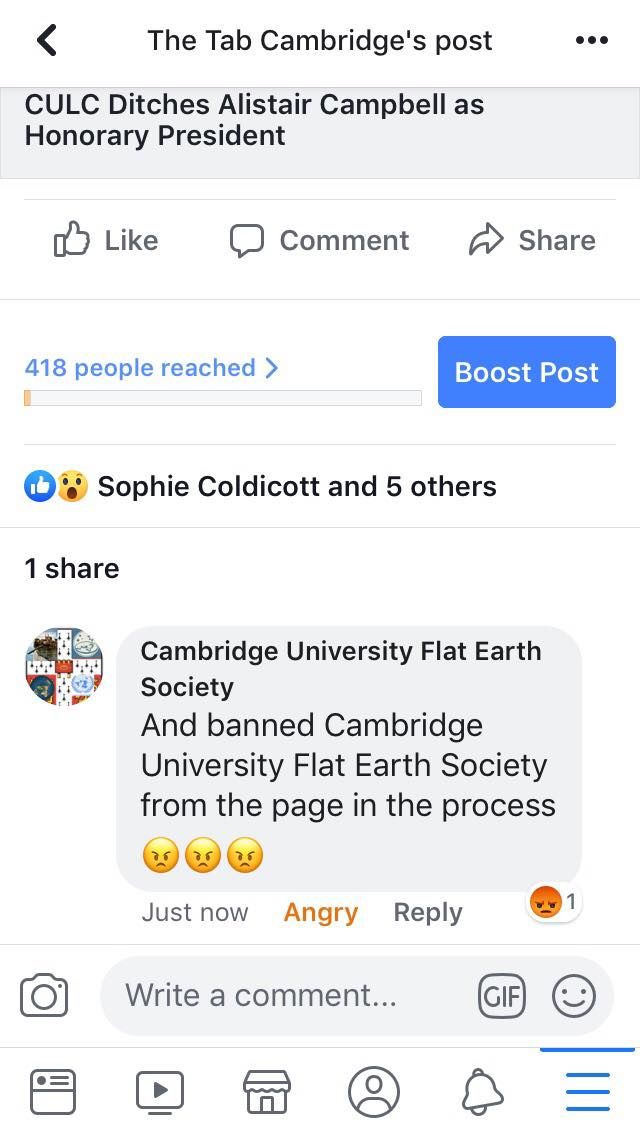 The Tab is currently waiting for an official comment from CULC.

If any of the issues raised by this article interest you, don't hesitate to email [email protected]