A heart-wrenching and heart-warming account of grief and the dichotomies which it can construct and demolish.

Aberfan, Wales. The year is 1966. A coal tip landslide cascades down the mountainside, engulfing Pantglas Junior School, and 116 children die. ‘The Revlon Girl’ depicts the true story of a beauty advisor who meets with a group of bereaved mothers. This truly mesmerising production portrays how these two worlds bleed into one another, capturing not only the horror of the disaster itself, but the debilitating pain of the aftermath.

The audience are greeted by a bleak vision; an empty stage shrouded by mountainous black shapes, along with the sounds of children playing, which creates an eerie tension that runs throughout the rest of the performance. However, the stage does not remain vacant for long. The 5 characters appears one by one, which allows the audience to build a relationship with each. The set itself is assembled gradually by the cast, which gives the piece the sense of realism that makes it even more impactful. It remains minimalistic in terms of lighting, sound and set, and this creates a perfect canvas for the vibrant distinctiveness of each character to shine through. 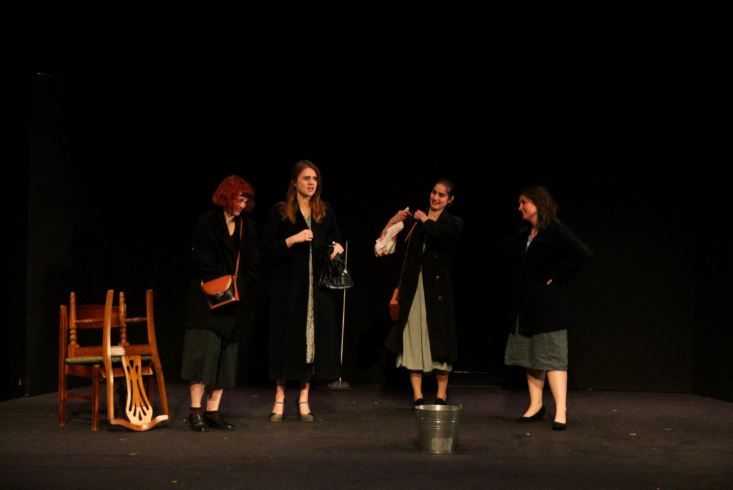 When the audience believes in a character, they believe in their stories – and the depth and richness of character created by the cast is what makes this production such a triumph. Frankly, every individual performance is faultless, and the distinct voices are a nod to the multifaceted nature of grief. Each actor creates the ebb and flow of tension and humour, of light and shade, which is nothing short of captivating. Geraint Owen’s directorial skill brilliantly displays this; the dry cynicism which Meg Coslett uses to portray Rona facilitates her explosive anger as well as more light-hearted comedy. Freya Ingram portrays Sian as the calm, devoted peacekeeper, which makes her hysterical outpour all the more poignant. Martha O’Neill creates a Jean who, searching for God, is capable of an incredible tenderness yet a sharp bitterness. Amelia Hills’ depiction of Marilyn as trapped in her own world of superstition and guilt makes the moment in which she can finally accept comfort from Jean deeply powerful. 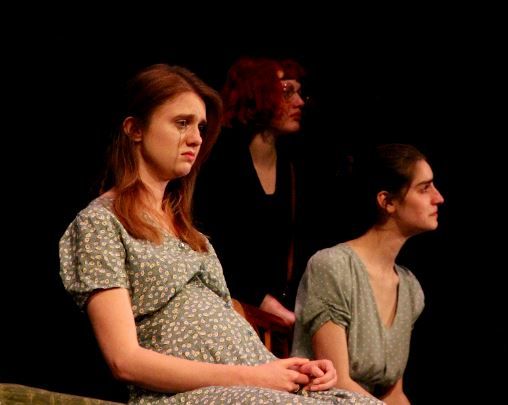 “Since the disaster we’ve all kind of… forgotten about ourselves. "

The division between the Revlon Girl and the four Welshwomen is made explicitly clear. This is emphasised through proxemics, as she occupies a separate half of the stage, through set, as even her makeup chair is sleek and modern compared to the old wooden chairs, and through costume, as her silky leopard-print dress contrasts the faded floral tea-dresses of the other characters. Through this, an ‘us vs them’ dynamic is created, and the existence of two different worlds of mining tradition and modernity, and the tension between them, is acknowledged. This ‘othering’ of the Revlon Girl is by director Geraint Owen is highly effective, as her character serves as a vehicle for audience perspective, a way by which we can learn how these women persevere in the face of disaster. 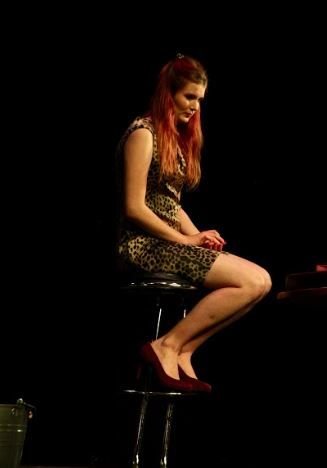 Emily Webster as The Revlon Girl

The true joy of Owen’s production is watching this barrier gradually disintegrate, as Revlon, whether she likes it or not, crosses into their realm. Emily Webster demonstrates a deep shift in her character as the narrative unfolds, as the Revlon Girl changes from being powerless to powerful, from seemingly ignorant to astonishingly perceptive. The way in which the cast come together and bounce off from one another reflects the solidarity which can arise from disaster. One of the only sticking points was the arrangement of chairs on stage, which sometimes seemed to inhibit the cast’s ability to move and interact fluidly without blocking each other, but this in itself could be seen as a way to maintain the tension in the actors’ physicality.

‘The Revlon Girl’ is a play of dichotomies: of tension and release, of division and unity, of hope and despair. Through addressing delicate topics directly and bluntly, it challenges the reserved and prudish side to British culture, allowing us to explore all dimensions of grief. This production is a dazzling success and pulses with raw emotion and energy.