What does this mean for a zero carbon future?

Nick Cavalla, who is currently the chief investment officer, along with three other staff members will leave later this year to join Talisman Global Asset Management.

Cavalla and the aforementioned colleagues have faced criticism from Cambridge's Zero Carbon Society to divest from oil and gas companies. The university ruled this out in June, but pressure from the group does not appear to be stopping.

Cavalla, who oversaw the rise of Cambridge's endowment fund by 18.8 per cent last year, said it "felt like the right time to take on a new challenge."

Zero Carbon's statement in response believes the resignation "demands wholesale changes in the university’s investment management", and believes it represents a "university management in crisis."

They say this resignation seems to represent just how effective the student activism has been and just how much "rot" there is in the administration of the university. They believe this signals a great, necessary change. 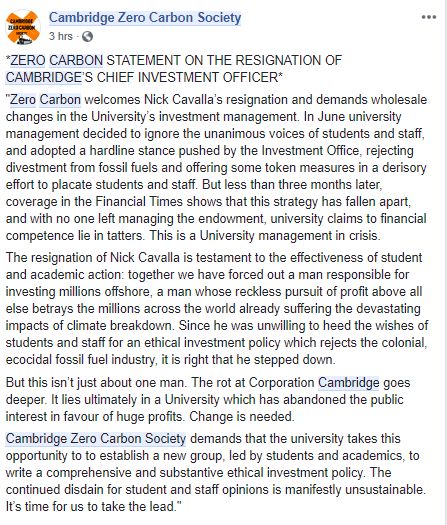 Whether or not the resignation of four senior staff will shepherd in great change is yet to be seen. It seems unlikely that any new staff they get in will be prepared to try and overturn a decision the university made quite unanimously.

It seems, however, that the pressure around divestment is having an impact on the upper ranks of the investment funds. So much so, four people were willing to forgo their jobs over it.