In other news, water is wet.

The Cambridge Union has been embroiled in an election scandal, with some members of committee accused of spreading vicious rumours about one of the candidates.

Certain members of committee claimed that Rhianna Voice, who is running for the position of Executive Officer, used her role this term as Head of Events management to ‘treat’ members who would support her electoral bid. In a notice published on the door to the main Union office, President Harry Stovin-Bradford and Imram Matteo concluded that such the claims were simply malicious rumour.

“That Ms Rhianna Voice, Candidate for the Office of Executive Officer (Lent 2018) in no way used her role as Head of Events Management to treat members of the society for their support in upcoming society elections”

“On the balance of evidence, that HSB and IM have not yet concluded if such rumour has been spread maliciously or not.”

The notice further added that if the rumours continued , the perpetrators would be ‘punished.’ 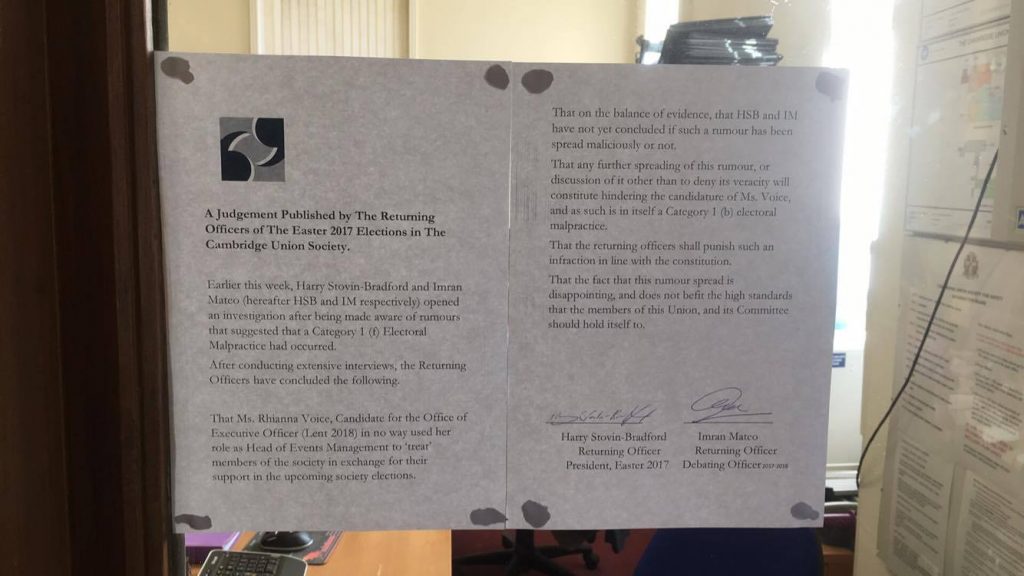 Responding to the allegations, Returning Officers Harry Stovin Bradford and Imran Matteo commented: “The fact that this rumour spread is disappointing, and does not befit the the high standards that the members, and its committee should hold itself to.”