The Tab talks to Stephen Fry

On a clear and crisp April evening, I headed down to the Cambridge Union to talk to the person who is said to do talking best, Stephen Fry.

The comedian, writer, presenter, campaigner and national polymath is a colossus of the entertainment and arts world. Whether it be fronting QI, hosting the BAFTAs or narrating the Harry Potter audiobooks, the talents of Fry are unavoidable.

It was with this in mind that a group of budding student journalists waited around a table in eager anticipation. ‘Goodness, are you sitting an exam?’ he quips on entering, adorned in his trademark corduroy jacket. A soft giggle erupts in the room. We can relax now. 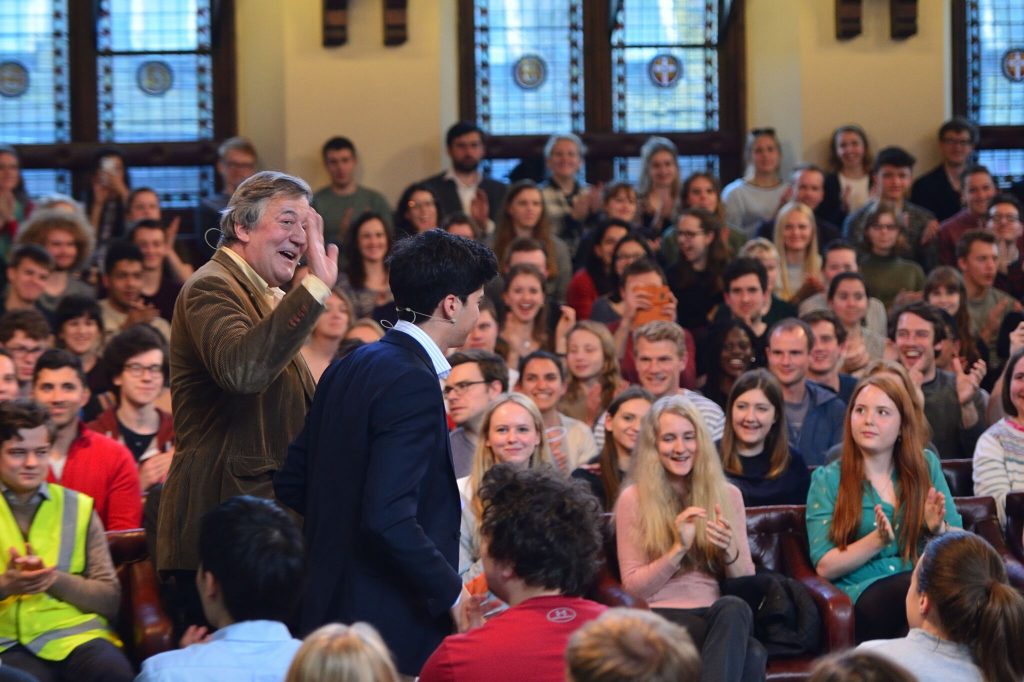 A passionate campaigner for mental health causes, discussion begins with Fry’s advice on identifying and dealing with mental health. Fry is the president of the mental health charity Mind, and has recently contributed to the Heads Together campaign, which is also headed up by the Duke and Duchess of Cambridge and Prince Harry.

He’s clear to point out that mental health affects people in fundamentally different ways, with no ‘one size fits all’ solution.

‘To say “what you must do is this” is quite difficult… it’s just not as simple as that,’ he notes.

Being in Cambridge, conversation quickly turns to Fry’s years with the likes of Hugh Laurie and Emma Thompson in the Footlights, and the possibility that their success could be replicated today.

‘We knew we were lucky… we knew this when we joined the Footlights. We saw on the walls all the Pythons and various other people and thought “that door’s been closed…that’ll never happen again.” So when we got our own TV show with the BBC it did seem like the most amazing thing. We were unbelievable lucky, outrageously so.’

Despite Fry’s acknowledgement of his own luck, he’s quick to reassure us that his success was highly dependent upon being able to write comedy at university. ‘The most important thing was that the Footlights was always about writing – writing and performing – the two were indistinguishable… in the end it’s only those who write the material that survive.’ 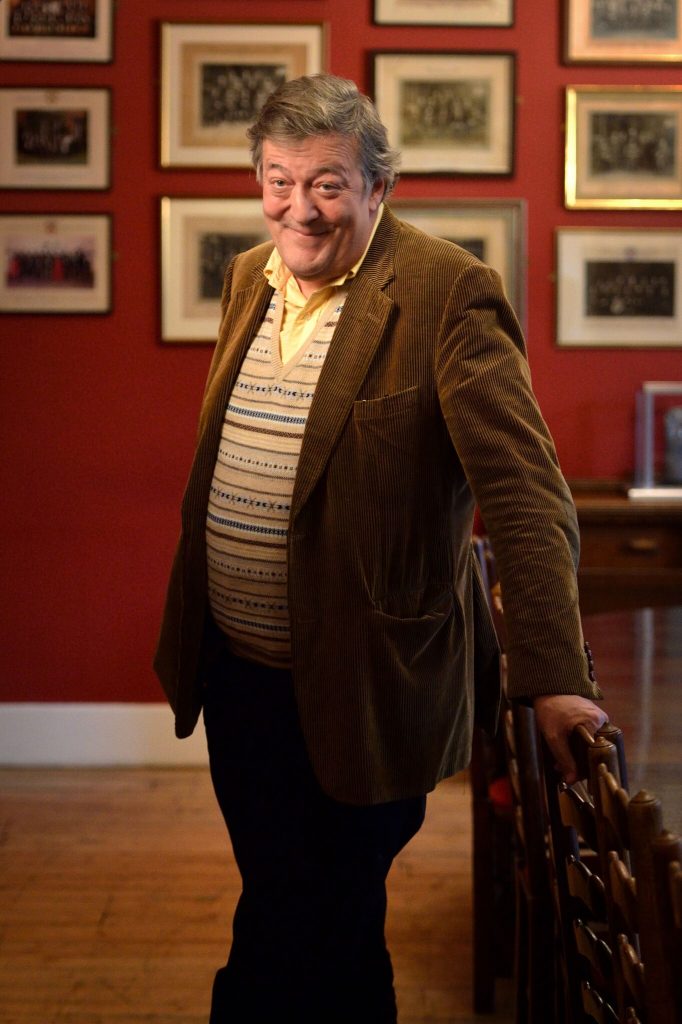 I questioned him on the current standing of comedy and satire in the topsy-turvey world of the daily political earthquake. ‘It’s hard to deny the filter bubble and the refusal to listen to contrary views… in America there is a magnificent energy in terms of political satire… but over here there has been less of that intelligent satire.’

He’s forthright in his definition of satire, clarifying that it ‘tells the reader or viewer that they are disgusting, not that this politician is disgusting, but that you are. I am useless, I am a hypocrite… I am the reason the world doesn’t work.’ 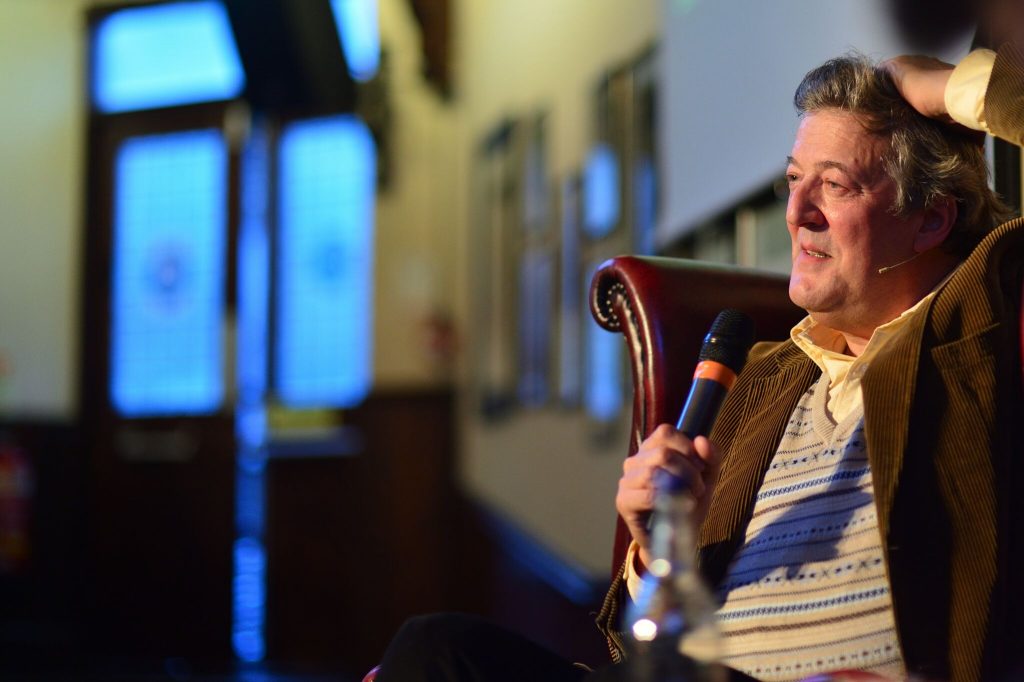 This leads to the unavoidable comparison with matters Stateside (where incidentally Fry now spends much of his time), and the satirical potential of the current White House incumbent.

‘It’s so easy to mock Trump. For heavens sake there’s never been a more obvious cunt… its absurd, everything about it… but no one dares attacking those who voted for him because it looks like snobbery, the sneering of the metropolitan coastal elite.’

Our time is up. Fry  leaves the room and enters a jam-packed Union chamber to rapturous applause, in what felt bizarrely like the Cambridge version of a football homecoming. 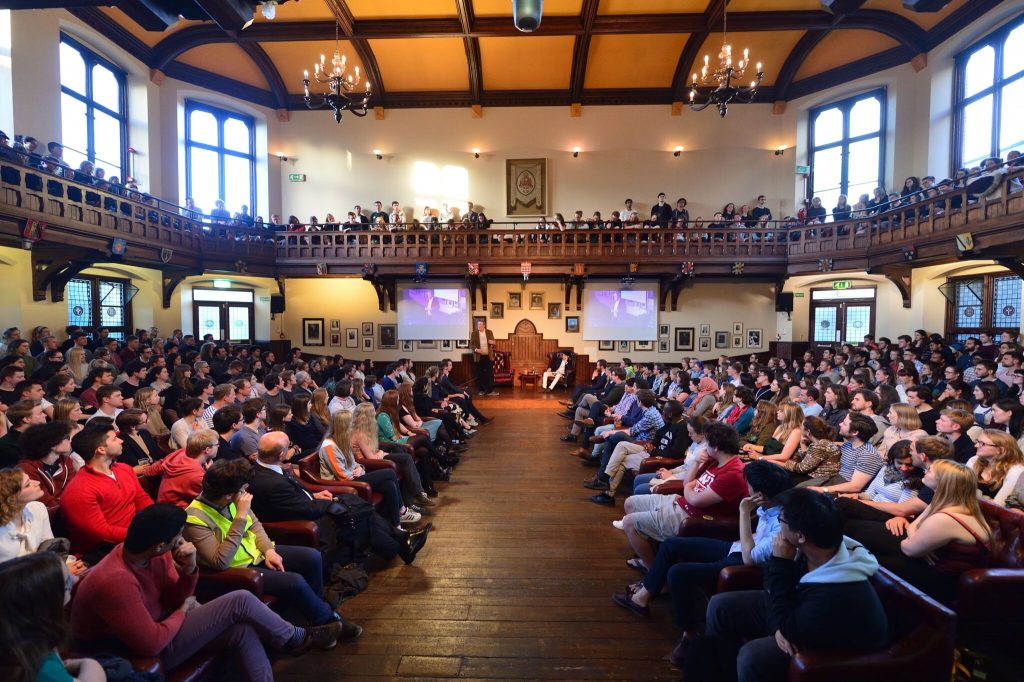 As impressive and eclectic as his ideas may be, what’s most striking about Fry is not what he says, but the way he says it, an eloquent river of linguistic flair that never stops for breath.

It baffles at times, but mesmerises nonetheless.