LEAF ARBUTHNOT enjoys an evening of infectious intellectuality at Love Art After Dark.

Many students spend three years at Cambridge without setting foot in the Fitzwilliam Museum. It is skirted as a tourist trap in neoclassical garb, containing Pissarros, codpieces and a handful of miscellaneous sarcophagi. ‘Love Art After Dark’, the Fitzwilliam Museum Society’s evening extravaganza, showed just how much the Fitz has to offer, both as a permanent collection and as a host for temporary exhibitions. 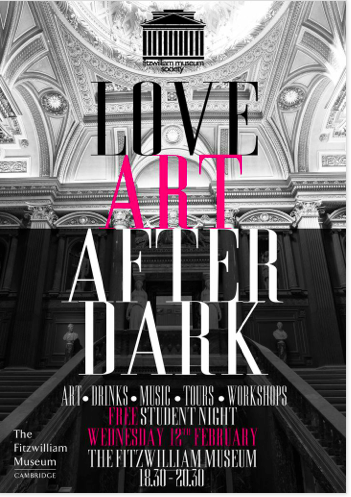 Students were invited to rove around the site for free for two hours, having been issued with a glass of complementary wine. The atmosphere was May Ballian, with smartly dressed couples squinting at their printed timetables, working out what to do when.

Most rooms contained a microphoned sage, lecturing intermittently on the histories and idiosyncrasies of the artworks in the vicinity. Whether or not you stopped to listen, every room was thick with infectious intellectuality. Dr Vicky Avery’s discussion of the contemporary art and craft collection was particularly enlightening. She confirmed that ‘Well, well, well’, an outsize bangle made out of treacle tins, was indeed meant in jest, a piquant challenge to the fusty art establishment. Meanwhile in Gallery V, Rachel Sinfield ran through the backgrounds of three Renoirs, mooring the neighbouring canvases to their moment.

Another highlight was ‘Having a laff’, a cartoon and caricature collection featuring the likes of Ronald Searle, some of whose figures were caught midway between embryonic pencil sketch and colourful end product. A flesh and blood cartoonist was settled at the back of the room, happy to issue advice about paintbrushes and creative discipline, amongst other things. It was also an immense privilege to be granted access to the current John Craxton retrospective, whose light-thronged paintings were incredibly restorative after the thrash of the art-guzzling crowd and shoddy weather outside.

Music, too, was on offer. At the start of the evening, Charlotte Broker slammed it with some perfectly pitched opera, whilst Over The Bridge performed inoffensive close harmony, with the soloist for ‘Stand by Me’ singing particularly well.

Nonetheless, there were problems. Mostly, these were generated by the evening’s success – for while it was nice to see so much young blood coursing through the Fitz’ veins, it all felt a little crowded, a little fraught. Lovely as Broker’s singing was, few but her front-row groupies could actually hear her. Over The Bridge too were chomped up by the acoustics of the museum shop, an area presumably designed to keep stray voices down. And pushing through the crowds just to make it to the next tour became rather wearing.

Still, overall it was impressive. If tranquillity was thin on the ground, it was more than made up for by the quality and variety of activities offered. The Fitz was shown and shown off as it should be, a truly extraordinary art hub, anything but irrelevant or dowdy.