The Tab Meets: Glamrou from Denim

BETH SWORDS talks to Amrou Al-Kadhi (aka Glamrou), the founder of Denim, about their new endeavours post-university and the sadomasochism behind sequins.

Denim, Cambridge’s first drag troupe, was set up in 2011 by Amrou Al-Kadhi, who, by night, goes by the name of Glamrou.

It swiftly became one of Cambridge’s most animated and most loved events, where everyone could unleash their inner glam, dance, sing and wear feather boas like there was no tomorrow. The group have now all graduated. However, thow show doesn’t stop there.

Their show at the Bethnal Green Working Men’s Club this Friday will provide this in all its glory.

We talk to Amrou about it all.

In 800 years of history, Cambridge has given way to the likes of Erasmus, Pitt The Younger and Charles Darwin. What made a drag troupe seem right?

Besides being something I’ve always wanted to do, I think there is a lot of repression at Cambridge (whether it is because of work, or just sexual repression which in places is palpable), and getting everyone in drag in one room seemed like a way to help release some of this. I also think it’s good to remember that contextually “queer” imagery was being more and more mainstreamed in the media. It’s probably more than just a coincidence that the first Denim coincided with the release of Lady Gaga’s “Born This Way.”

Also, juxtaposing the intensely liberal nature of drag with the perceived traditions of Cambridge seemed exciting and antagonistic, and I wanted to do something new.

What are you trying to do? Is it ‘just’ entertainment?

Well I think it would be reductive to say that it was just entertainment, but I think entertainment can be a very positive vehicle through which you can make a bigger or meaningful point. It’s a concept I actually studied and worked on a lot in both my undergraduate and postgraduate studies; trying to locate political strategies which use popular forms of entertainment or information to bring their message across.

I think the “entertainment” factor of Denim is a very positive way to get people to celebrate the message that is being put across – gender isn’t fixed, and that individual quirks should be revelled in, identity explored, etc…The idea is to associate that feeling of euphoria and joy on the night with its political and philosophical message.

What do you think drag culture in general is trying to achieve? Is it some sort of anti-establishment stand making people feel more comfortable with trans or gays?

Firstly, I don’t think “drag” should be made at all synonymous with “gays,”; the exploration of gender and its external manifestation doesn’t have much to do with the realities of “sexuality.” In fact, many of the performers in the Denim Troupe are heterosexual. I think the two have been put together for the sake of ease, and this should be avoided.

On a philosophical level, I think drag exposes the transparency of gender constructions, through moving about and meshing together “male” and “female” signifiers completely at will. On a personal level, it can allow an individual to explore the several other facets of their identity (there are an infinite number of possibilities within every single person I think).

Why do you think so many people at Cambridge went mad for it – Cambridge normally being so hetero-normative? Was it out of intrigue?

In my four years experience of Cambridge, I cannot TELL you how many sexually confused men and women I came across in my time. Although people are so intellectually bright at Cambridge, I think this compensates for a bit of sexual/emotional maturity, and I think that Denim provided a safe space for people to explore their identity without being judged. Also, Denim was never “LGBT” exclusive, and I think it made drag accessible, and “mainstream” in a way, just as, in a bigger sense, Gaga “mainstreams” a lot of queer imagery. Plus, it is a night out where everyone can completely let go, and Cambridge is bloody stressful! So in that sense I’m not surprised people went so mad for it. 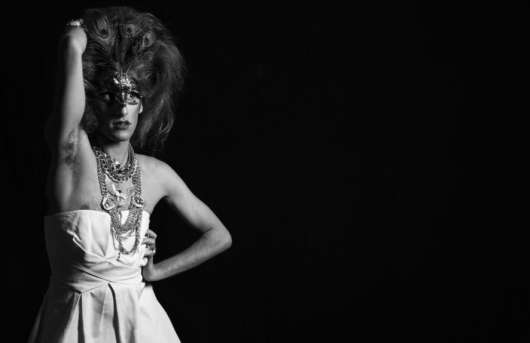 Would you be keen for a Denims ‘offspring’ group to be set up in Cambridge now you’ve left?

We’re in talks to possibly come back and do another gig in Lent, and the possibility of an “offspring” group is also being discussed, but nothing at all concrete or final on this I’m afraid.

What kind of night do you think would replace Denim?

To be honest, I’m not sure. I hope that nothing just outright “replaces” Denim, but like you say, I don’t think a “Stand-in” alternative is the answer. Whether or not we continue to throw Denim gigs in Cambridge, I think it’s important that a “queer” night for everyone still exists. I think hopefully what Denim showed was that everyone, regardless of sexuality, gender, etc…can still identify as “queer,” which is sort of what the academic meaning of the term is anyway. “Queer” is an all encompassing concept…but yeah, an “inclusive” queer night.

Which show do you think was the best at Cambridge?

I was happy with the second Denim at the Union, since it was slightly more raunchy and explicit, and I think more and more we’re looking to make the shows more shocking (but still fun and uplifting at the same time). But now that we’re in London and have more free time to actually rehearse the show (which we usually just put together in 3 days in Cambridge), it’s been really interesting actually writing the show a lot more, giving it a narrative and proper structure, and we’re excited to potentially bring that new show to Cambridge.

I’m really pumped for the one that’s coming up on Friday, which will be more of a sit down cabaret atmosphere with a pretty twisted story. It involves us being birthed from white Lycra eggs at the start.

Big platinum blonde wigs, towering stilettos and dresses that would make anyone feel prudish, are fairly impractical. What’s the hardest thing about being a Denim – the intricacy of the wardrobe?

Do the sequins chafe…?

I CANNOT TELL YOU HOW PAINFUL IT ALL IS. I have a weak leg myself, and I limp for days after a denim show. Getting rid of the hair is very uncomfortable, the huge wigs make your neck ache the next day, and the cuts and brazes all over our bodies after the show are very painful too.

In a slightly sadomasochistic way, I quite like the pain. It makes me feel like I’ve really “transformed,” almost castrated myself, and that it’s all worth it. I find the process of getting into drag quite emotional every-time, though love it once I am in it. Another hard thing about being a Denim is getting a microphone that works– this is a curse we seem to be breaking out of in London (fingers crossed).

The Denims will be putting on a show on Friday 22nd November at the Bethnal Green Working Men’s Club in London. Glamrou and co. will be taking you back to 80s New York sub-culture of ‘the ballroom’.