SPOILERS: This article will contain spoilers up to episode 4 and no further, as that’s as far as I got before I had to call it a day and made the right decision to turn this ridiculous series off.

What is there to watch on TV right now, to stow us away from the impending boredom that lurks around the corner of every half-arsed Zoom quiz and overbaked banana bread? The current consensus is White Lines, Netflix’s latest whodunnit about a DJ-come-mummified-corpse that turns up in a crusty field on the rural outskirt of Ibiza. Why is he there? That’s for us to find out over the course of ten DRAGGING 50-minute episodes that The Guardian describes as “gloriously lurid fun”. If your idea of fun is wasting several hours of your life on poor acting, unfeasible storylines and ludicrous banality, then sure.

Am I watching something completely different from everyone else? Whether it’s the dog sniffing some fat flakey lines from the grass and somehow NOT keeling over, or the fresh out of RADA dramatics of some of the cast, overplayed cliché is no more than 60 seconds away at any point. Lack of taste has just been announced as a new symptom of the COVID, so you’d better stay away from anyone who enjoyed White Lines. I’m sorry, but here is every reason why this shitty show has not made a fan of me.

In the first of the unfeasible, the dog sniffs cocaine and drowns

I’m not a vet, but come on – the dog would’ve died so much sooner. I even went to the petty length of researching it – dogs are incredibly more susceptible to cocaine poisoning than humans, and the rate that the dog chowed down on it like fuckin pedigree chum, it would’ve been on its back.

That mf would’ve died long before it decided to go for a few lengths. And then it just got brought back to life? Right.

Then Zoe seriously injures Boxer with a spear gun, and once they’ve all nearly killed each other they’re mostly going to act like that didn’t happen

Laurence Fox has the worst accent in the series, hands down

Laurence Fox’s character is designed to be the caricature of an oafish expat hippy, but the reason that he is nothing but this was insulting to me as someone that expected anything remotely deserving of the buzz it’s been receiving – it’s just so obvious. Who takes magic mushrooms at a funeral?? Wronguns. And let’s not even talk about the communal singing. 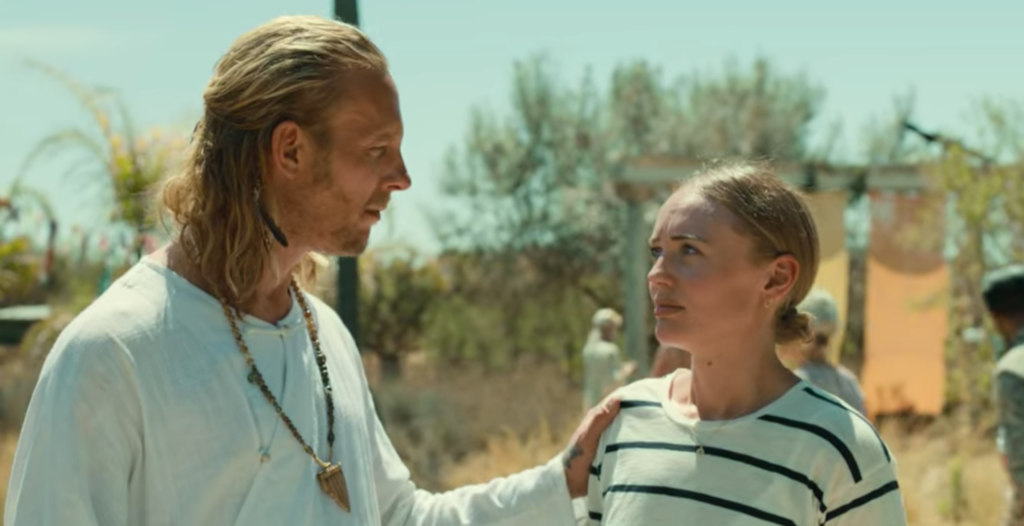 “Okay, we want a show about sex, murder, clubbing, Ibiza, the late 90s, drugs, young people. Oh, and it has to be the exact stereotype that’s been done a million times before. Go.”

The sex party (vomit), all the hippy shit, that psychedelic 4×4 and the terrible clubbing scenes are all great examples of this. Like, they seemingly googled “Spanish music” + “club music” and chucked the first results they found into Premiere.

But then just somehow shows up and comes over looking for her? What a gent x

No need for an expensive antibody test, just ask Netflix to identify anyone who has watched all 10 episodes of White Lines as they are clearly immune to any old shite.

The plot is completely empty

The script and writing is just…terrible.

As someone who enjoyed The Stranger, I can appreciate a trashy whodunit, but this was painful. Oh yes, I’m well acquainted with “so bad that it’s good”. This is so bad that it’s awful. It actually defies any logic that someone would be invested enough to actually give a shit about what happens to Axel.

The plot is so vapid that it tries to make do with sensationalist happenings to compensate. I mean, wanking off a priest? As someone on Twitter perfectly summed up, the whole thing is “just a collection of unlikeable people doing unlikable things with no real consequences”.

If only we could all switch off our feelings like that.

The acting is extremely “fresh out of drama school”

Some of the Northern accents were just atrocious, and the portrayal of young people was so OTT. No wonder people are calling it Eastenders in Ibiza. Mike, yes I do:

Anyone else think the acting on #WhiteLines is horrendous ?

Boxer’s flat – is it just inside the club? Or was that not even his flat?

What was it supposed to be? Does he just chill in the office?

Do you mean to tell me she had all her stuff in that tiny little rucksack?

“Eh Zoe chuck us one of those deck chairs that u packed!”

You ever heard of Airbnb you cretin?!

Ffion, take it away:

PSA: don't watch #WhiteLines on netflix – it's shockingly bad. terrible accents, even worse acting and a plot that you'll guess the outcome of in the first few episodes. 8hrs of this at least is just filler. it's complete shite peppered with an abundance of cringey sex scenes.

The whole car chase is a masterclass in plot holing

They’re just dashing huge amounts of cocaine out the window and hoovering it up with a mini hoover – and they’re NOT incarcerated for several years because of this??

U have never been raving so u don’t understand

Yeah, I was born in 1994, but really? Looking back on some of those mad old VHS tapes of classic raves back in the day shows a goldmine of wavey clothing, people chattering off their heads and chaining filthy rollies… this is beige in comparison (quite literally with the colour grading).

Anyone who says it brought them back to the 90s clearly didn’t go to raves in the 90s, it seems.

Why is Zoe dressed like a primary school mum?

The costume designers said fuck it and decided to do the most lacklustre, uninspired job when it came to dressing the actors, especially Zoe.

Shit, I’m half-convinced that they had most of the young rave crowd topless so often to save themselves a job.

The worst characters on #WhiteLines pic.twitter.com/yBXZJ68wm7

Did anyone think that this might be wrong? Of course not, because it’s the Manchester rave crowd, dude! Come on! Anything goes!

No one would do this. Ever.

Sorry but all the extras suck too

Not really much to attach here, I just hate you all.

If someone in White Lines started chanting ‘WE LOVE YOU BURNLEY, WE DO’, it would practically be the same film. Even some of the dance moves are just as questionable as Neil’s.

Kika lands, and then delays going to her dad’s dog’s funeral to show some stranger she’s never met the sites of Ibiza

Why is all the film editing so saturated??

Okay sure, in the early 00s saturating your pics was the peak of people’s editing skills, but why for the flashback scenes was this the chosen colour scheme? Did the 90s really have such a horrible piss-yellow hue? 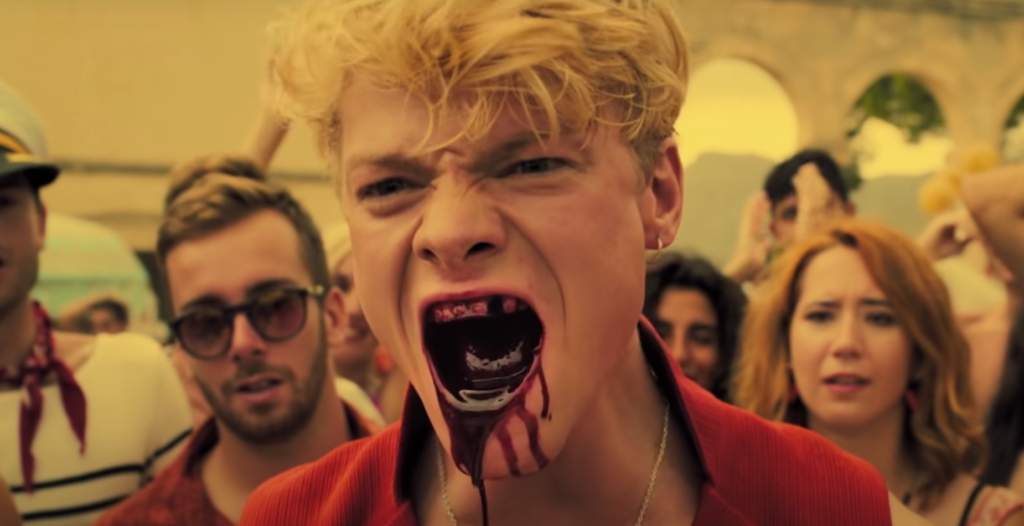 SEX! DRUGS! RAVES! YOUNG PEOPLE! White Lines has got it all – bad music, bad dancing, excessive lighting and funky glow sticks. Maybe this really is what it is like to party in Ibiza, but regardless that rave scene is enough to make anyone want to vomit.

On that topic, what are those eye masks about that everyone seemed to have managed to hold onto also in the Manchester rave flashback?! Also if the police showed up with everyone off their tits, you wouldn’t stand there in protest – you would run for your goddamn life.

I know this is a particularly pedantic point, but we’re all well versed in how shit online calls are from our many weeks of being forced to do them on a regular basis. No one has that crystal HD video. And aren’t they just painful?

ALSO, it features some really nice places in Ibiza, which makes us feel like we’re having a good time because that’s where a lot of us would otherwise be right now if it weren’t for the current crisis. I get that it’s a bit of escapism, but for something that garnered so much hype, it’s complete trash.

Okay, maybe I’m being a bit harsh, there are some good parts 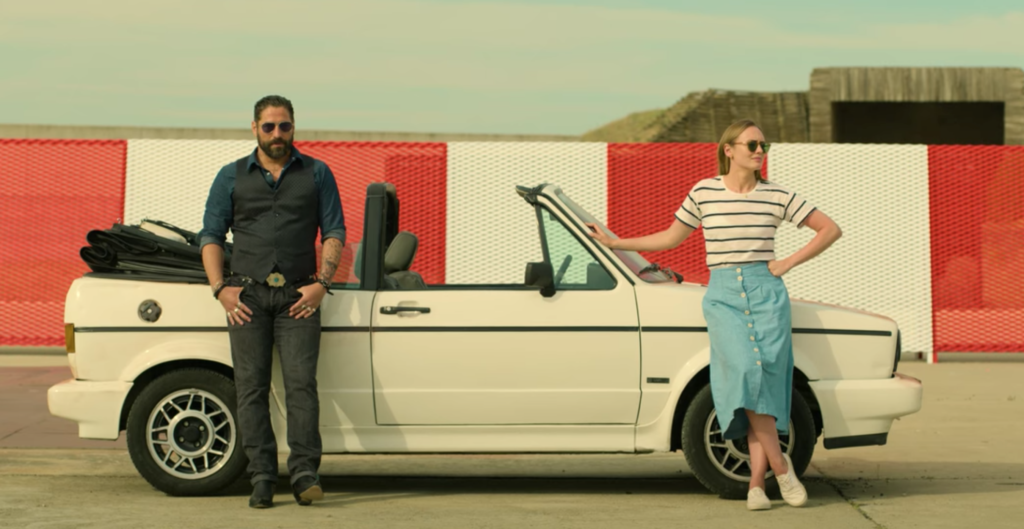 • White Lines on Netflix is ‘insane’, ‘absurdly excessive’ and ‘explosive’

• Quiz: Can you guess the Netflix show just from its description?