It’s official: These are the poshest uni halls in the country

The results are pretty surprising ​​​

It’s no secret the UK has a problem with private school students dominating university spaces. But have you ever wondered which UK university halls have the most privately educated students?

Which halls are full of hidden closets of tweed and chinos, where prosecco is guzzled by the litre, and choruses of ‘rah’ and ‘DAHLING’, ring out until the days end?

The Tab sent out freedom of information requests to every British university and found out which university residences house the most private school kids. 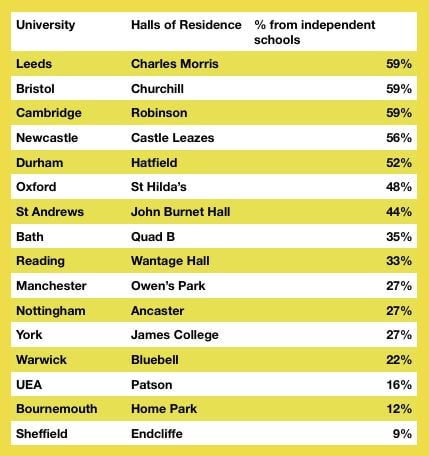 Universities not included were unable to provide the data required.

Charles Morris Hall is in first place, with 59 per cent of the undergraduate residents coming from independent schools. It is the most popular accommodation in Leeds and is on campus. Prices range from £178 to £211 per week, which gets you a double bed and an en suite room.

The Charles Morris lifestyle is a luxurious one. It’s not a surprise this is the most private halls in the country, as the expenses don’t just stop at rent, with clubs and takeaways right at your doorstep, the temptations are too large and would inevitably bankrupt you if you didn’t have a comfy trust fund to fall back on. Ah well, you don’t choose the posh life, it chooses you.

Tied with Charles Morris Hall in Leeds, Church Hall in Bristol is also in first place. With 59 per cent privately educated students, Churchill has a never-ending boarding school kind of vibe, fully cementing you in the one per cent bubble, and is full of your standard uni poshos, with fake south east London accents, and daddy’s credit card on hand to pay for everything.

You would expect Churchill to be mega expensive and super lush. Expensive, yes, but lush, not so much. While it is very scenic, old and pretty, Churchill Hall is 2.1 miles away from campus and with prices between £184 and £254 per week, you’d expect to never have to Uber to uni, but alas, hopefully the abundances of yahs and rahs makes up for it.

Also in first place is Robinson College in Cambridge. 59 per cent of the students it houses were privately educated. The reputation of Robinson College is in keeping with the rest of Cambridge – full of people who are posh and clever. The main advantages of Robinson, are the en suite bathrooms, lack of tourists, and the fact that it’s very social.

A post shared by Robinson College, Cambridge (@robinsoncollegeadmissions) on Jul 2, 2018 at 1:42pm PDT

Castle Leazes in Newcastle is in fourth most private university residence in the country, beating out universities like Oxford and Durham, with 56 per cent of its students coming from an independent school background. The stereotypes of Castles Leazes are exactly what you’d expect – it’s full of students who quickly switched out tweed for edgy flares once they realised the cool kids dress differently at uni than at Eton.

Many students complain of how messy the halls are, but student reviews detail that there are cleaners which come to resolve this. Essentially, Newcastle’s poshest halls are full of private school kids who don’t know how to clean up after themselves, and you couldn’t get any more on brand.

Hatfield College has a reputation for being full of posh pretentious southerners, and this reputation pretty much speaks for itself. Made up of 52 per cent privately educated students, Hatfield has major Tory energy, it’s fondly referred to in Durham as ‘Twatfield‘, and when you stick out at Durham for being posh, you know your privilege runs deep.

Many Hatfield first years have to share a twin bedroom which seems to have no upside, other than making sure you’re never too far away from someone called Poppy or Monty.

Oxford is surprisingly low on the list, St Hilda’s has the most private school students living in its residence, with 48 per cent of its residents coming from an independent school background. St Hilda’s is exactly as you would imagine, an incredibly scenic and beautiful catered accommodation which will set you back between £156 and £235 per week. It’s the place to be if you’re into punting, prosecco, and fancy formals.

It’s no surprise that St Andrews would be in the top ten, John Burnet Hall is made up of 44 per cent independently educated undergraduates. John Burnet is full of popular kids, with enviably cute and pretty rooms, decorated with strings of polaroids of them drinking prossecco or playing croquet.

It is the smallest halls of residence in St Andrews, and regularly throws wine and cheese receptions, formal meals, garden parties, and it has a hall garden where residents can grow their own fruits and vegetables. What more could you want?

The Quads is known as being a posh halls in Bath, so it’s not much of a surprise that Bay Quad ranks as the eighth most private halls in the country, with 35 per cent of residents coming from an independent school background. Bay Quad is on campus, has massive social spaces, and the bedrooms are lush, they’re en suite, nicely decorated, have a TV and colour changing mood lighting (!!).

Halls that lush almost make you want to be a fresher again. The Quads are on the expensive side, costing £173 a week, so it’s not a surprise that the poshest halls in Bath would be boujee, expensive and full of private school kids.

Don’t forget to pop into the Quads to take a look at our on-campus accommodation. You can watch video reviews from our residents on some of the screens too. #BathOpenDay pic.twitter.com/0tab8IVlLI

Reading’s Wantage Hall is made up of 33 per cent privately educated students and is the only university in the top 10 that isn’t Russell Group. It is catered and has its own fancy bar, and the building itself is pretty fancy and is the oldest halls at Reading.

Wantage Hall stereotypes are pretty predictable, it’s not particularly social, it’s far from campus, and people will inevitably think that you’re part of a Quidditch society, or something equally weird.

The tenth most private halls in the UK, Owen’s Park in Manchester is made up of 27 per cent privately educated students. It is a catered accommodation in Fallowfield, which is incredibly popular among students, being hailed as having the best nightlife, social life and food.

Jack Whitehall is a former resident, so its status as one of the poshest halls is no surprise. Think Huji, outfits off depop and cans of Redstripe as far as the eye can see, because the posh can be edgy too you know.

• These are officially the unis with the most private school students