The fuzz didn’t have swords

An anonymous second year tweeted that her fresher was “chased across campus by armed police.”

Coppers were called to Constantine college after a member of public called claiming they saw a student with a sword on campus.

A spokesman for the police said:

“Armed police officers located a 24-year-old student from the university in an accommodation block a short time later.

“They identified the weapon, he had been seen carrying, as a blunt weapon, used for re-enacting military events.

“The man was given suitable advice to ensure that he understands the danger of carrying replica weapons in public and the consequences should an armed officer perceive that the person pose a threat to either the police or a member of the public.” 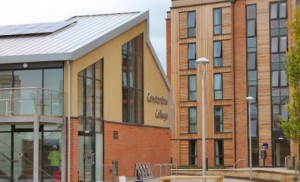 Running around dressed up carrying swords is a popular pastime amongst the Medieval society. But when it was suggested that the weapon could have been used as part of a role play, the spokesperson said:

“Anyone who is carrying replica weapons should ensure that they are kept out of view and stored appropriately to avoid causing alarm to other people.

“Groups and societies undertaking re-enactments in public places are advised to let the police know that the event is taking place.

“Reports of people seen carrying weapons in public places are always treated extremely seriously and will be responded to by armed police officers.”