Still unsure of who you're voting for? Don't worry, The Nottingham Tab has got you sorted.

Below is a list of all the candidates standing in Nottingham on Thursday in the general election. Underneath each candidate are a few key points about their beliefs and/or what they do.

RELATED: A guide to tactical voting this Thursday in Nottingham, for Leavers and Remainers.

If you are registered to vote in Nottingham and are unsure of what constituency you live in, go to this website and enter your university house's/hall's postcode: https://members.parliament.uk/constituencies/

Some politics stuff you might want to know before reading…

Austerity: a policy which began in 2010 to lower government spending (e.g. cuts to public services) in order to help the UK pay off its debts following the financial crisis.

People’s Vote: a campaign for a second referendum on Brexit, with the option to remain.

Labour’s policy on Brexit: negotiate a new deal with the EU, and then hold a referendum on this new deal against remain, all within six months.

Liberal Democrat’s policy on Brexit: hold a second referendum with the option to remain. (*At the start of the election campaign, party leader, Jo Swinson, said she would revoke Article 50—in other words, cancel Brexit—if she won an overall majority. This is unlikely to happen. If the Liberal Democrats do not get a majority, their MPs will support a second referendum.)

Green’s policy on Brexit: hold a second referendum with the option to remain.

Brexit Party's policy on Brexit: leave the European Union without a deal.

Brexit has been the defining issue of this election

Candidates who are standing in a seat that Nottingham students live in, constituencies from A-Z:

– First elected as MP in 2010 as a Conservative, but left the party earlier this year.

– Pro-EU, founded People’s Vote campaign which seeks a second referendum with the option to remain.

– Liberal Democrats stood aside to give Ms Soubry a clear run at the seat.

– Read more about Ms Soubry and her campaign.

– Previously worked in the RAF, NHS as a manager, and in various private companies.

– Read more about Mr Henry and his campaign.

– Read more about Mr Marshall and his campaign.

– Considers herself to be European, and supports a second referendum.

– Wants proportional representation, to taking action on climate change and to achieving social justice in the wake of austerity.

– Works in the NHS as a psychotherapist.

– Joined the ballot paper after Brexit Party stood down.

– Rejects Johnson’s deal and wants the UK to leave without a deal.

– Although a parody candidate, has some actual policies.

– Wants to scrap HS2 in favour of improving existing services.

Thank you to Nottingham People's Vote for all your support. Street stall & deliverers all over #Broxtowe #VoteSoubry

– Anti-austerity and says he wants to “stand up for young people in education and jobs”.

– Supports a second referendum with remain as an option.

– Wants to increase the number of local police officers and provide them with “powers to keep local streets safe”.

– Will campaign to scrap HS2.

– Previously worked in a local energy utility business in a manager.

– Cares about women’s issues and representation.

– She is a qualified solicitor, specialising in constitutional and corporate law.

– Wants to be a credible environmentalist candidate for voters as he believes no other party has the policies for dealing with every aspect of climate change.

Rosamund Hanson from This Is England has voted for me! If only my 13 year old self knew.

– First elected to seat as a Labour MP in 2010, but left the party earlier this year.

– Pro-EU and supports a second referendum on Brexit.

– Wants a ‘radical Labour government’ that will shift wealth and power in the country.

– Describes Brexit as a “threat to jobs and livelihoods”, and presumably supports Labour Brexit policy.

– Read more about Ms Whittome and her camapign.

– Welcomes the Conservative policies of more policemen and NHS investment.

– Previously owned her own small business.

– Wants to “reject the multinationals and focus on local communities and local business”.

– Wants to lower homelessness and “cut the cost of living, slash business rates, end Universal Credit, end Tory Austerity, improve working tax credits and promote welfare for those who need it most.”

– Wants schools to have the resources to adopt green values in how their buildings function. 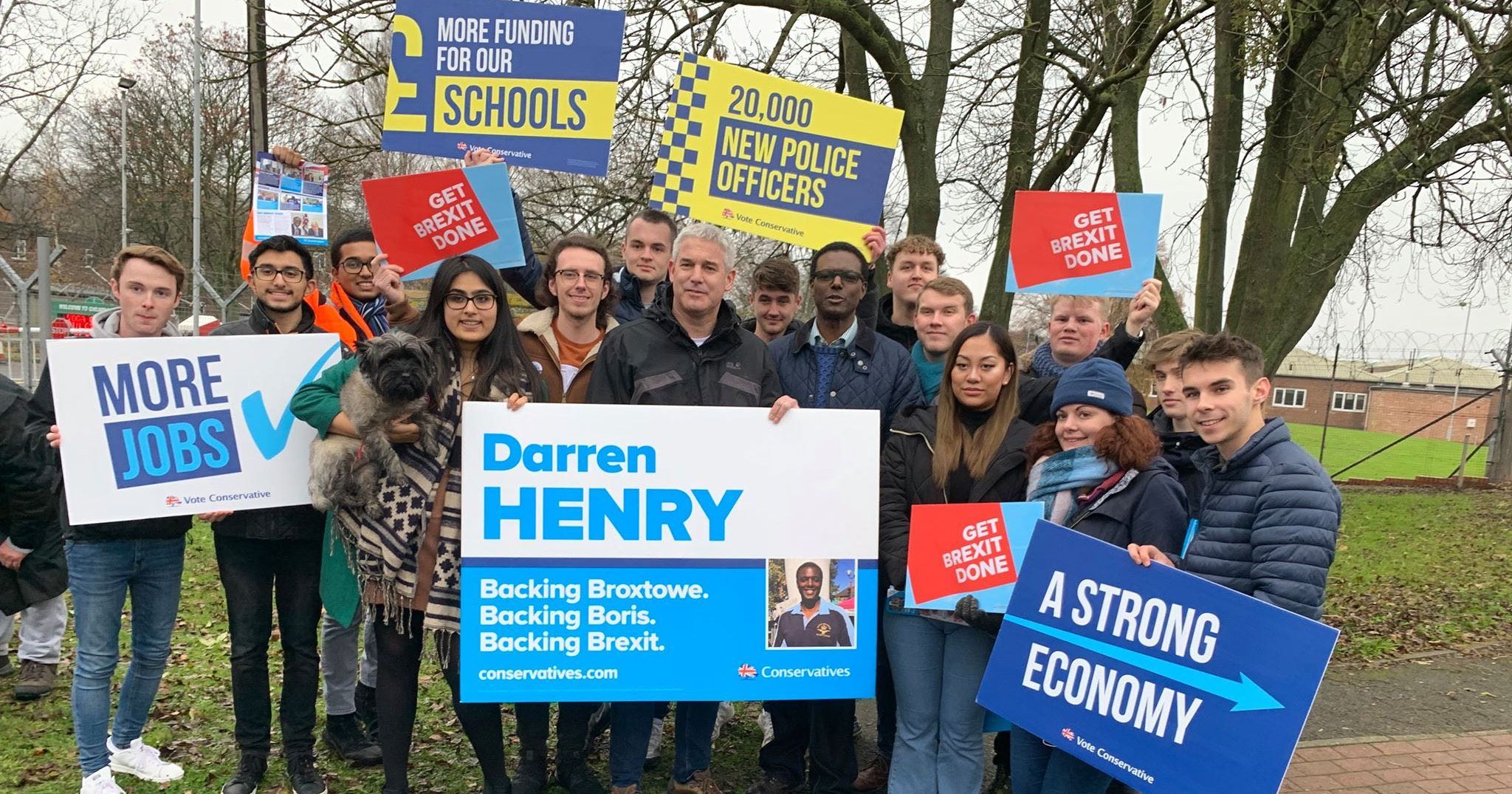 – Seeks to increase the number of GPs.

– “Saddened” by the loss of manufacturing jobs.

– Says he is passionate about diverse communities.

– Previously worked in the UK New Nuclear Build programme and in Rolls-Royce.

– Campaigned for a People’s Vote, wanting a second referendum.

– Believes that “no one voted to be poorer”.

– Works for a non-profit energy company.

– Says this is one of the few remaining elections where it will be possible to put climate change on the agenda.

– Led a campaign which stopped the building of a dual-carriageway ring road around parts of greater Nottingham.

Trying to make our @UKLabour canvass sessions a bit more fun & festive today with the return of #ChristmasJumperSunday… Thanks to all the residents who took time to chat. pic.twitter.com/3ll2yOGQxw

– Supports a final say on Brexit, with the option to remain.

– Read more about Ms Greenwood and her campaign.

– Says he does not want to waste time in 2020 on more referendums.

– Wants to see Nottingham get its share of new police officers and NHS funding, which the Conservative manifesto pledges.

– Says equality and voting/electoral reforms are among his top priorities.

– Says he is an old Labour supporter and believes they have turned their backs on voters like him.

– Says “we urgently need to change the way we produce electricity, heat our homes, travel, and many other things, to do them in a way that looks after our wildlife and protects our climate.”

– Has lived in Nottingham for 30 years.

I've taken @friends_earth's #ClimateActionPledge. If elected I'll put the climate first when I vote in parliament. We're in a #ClimateEmergency and must rapidly cut greenhouse gas emissions for a greener and fairer society. #ClimateElection pic.twitter.com/53fnMLBUbE

– Wants to use her experience in cyber security to help transform public services through the use of new technologies.

– Highlights Labour’s “fully-costed” manifesto which details how Labour would make the UK go carbon neutral by 2030.

– Wants to increase funding for public services and hospitals.

– Campaigning for better care for the elderly and their independent living.

– Advocating for the adoption of modular eco-build housing schemes.

Great to be out on Central Avenue campaigning with some of the team. The choice in Rushcliffe is clear – Johnson’s candidate or the Lib Dems. More and more former Conservative and Labour supporters saying they support @LibDems and our vision of a #BrighterFuture pic.twitter.com/S3kIWgIYXJ

– UKIP is the party Nigel Farage used to lead.

– Says British culture should be “protected and not destroyed”.

– Says Rushcliffe “deserves” to be represented by someone who puts them first.

– Says Brexit is something that must be fulfilled, although voting to remain himself.

Students will be able to vote for one of the candidates standing in their Nottingham constituency on December 12th if they are registered to vote at their university address.