Almost half of Nottingham’s students will be voting for Labour

Most defined policy as the most influencial factor for their vote 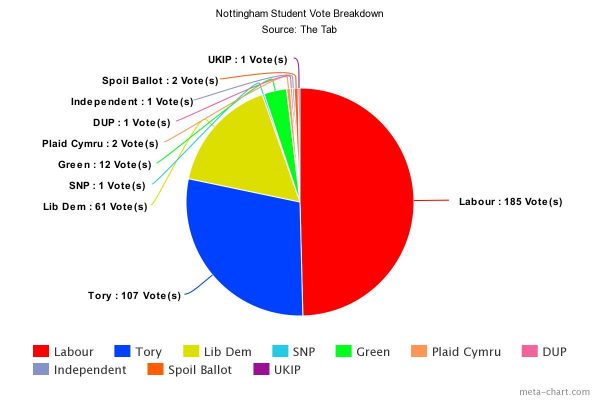 Here’s the breakdown of all the responses

When asked why they would vote for their chosen party, students listed a various responses that they would describe as the most influential factor in their decision. An overwhelming majority at 52.3% said that policy was the most valuable aspect to their vote. 12.9% responded that their party affiliation would be their most important reason and only 2.7% said they’d vote for a party just because their parents would as well.

Interestingly, 60% of those who said they would be voting Labour said policy was their most important reason for voting where only 38.7% of those voting for the conservative share that view. Whilst this survey is only an indication of the political trends on campus, one thing can be said for sure, Nottingham students are politically conscious and contradictory to popular belief are making decisions based of their own political judgment.