Speaking to The Tab, Rocky City have defended the bouncer’s actions

In the early hours of Thursday 22nd February, a University of Nottingham student wrote a lengthy post on the Buy/Sell tickets page after being ejected from the queue for Crisis that evening.

She writes about the moment a bouncer pulled her from the queue she claimed she’d been in for over an hour, in what she describes as an ‘aggressive’ manner. After seeking help from other bouncers and the management, Michaela left a complaint and her details to receive the results of an investigation promised by the club, and went home with her friend.

The Facebook post has received over 1,000 likes and 94 comments. Many of the comments were from other women and also men, complaining of similar problems they claim to have had with the bouncers and their ‘overly aggressive’ behaviour at previous Crisis events. One guy inquired as to what Michaela was wearing, which was quickly rebuked by another supportive commenter. 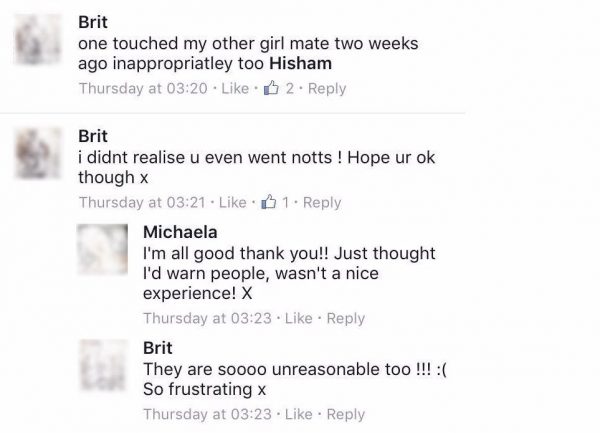 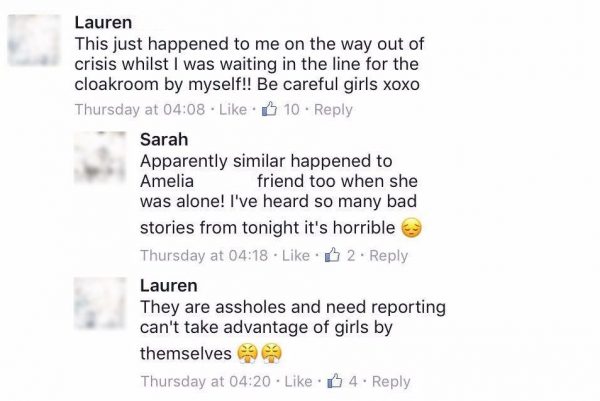 The general feeling around the post was that, in 2017, there should be no reason for the post at all, let alone such comments, which is why Michaela felt the need to write it in the first place.

Speaking to The Tab, Michaela describes the incident that prompted her post: “A bouncer started shouting at some people behind us to move back as he was placing another barrier, to try and control the queues I assume. I moved forward to stay with my friend and people behind me had already moved back so I assumed I was fine.

“Next thing I know a bouncer has grabbed me and pulled me back, shouting for me to move back. I’ve never felt so uncomfortable in my life, a big intimating bouncer has just grabbed me and frankly I was scared. I told him not to touch me like that and with that he had moved the barrier and pushed me out of the queue leaving me standing on the street alone and humiliated with everyone looking at me, when I hadn’t done anything wrong.”

The friend that Michaela was queuing with began to question the bouncer as to what the problem was. He was told to join his friend if he wanted but that Michaela wouldn’t be getting back in.

“A man touched me and I was the one who was humiliated and kicked out of the queue. I had no idea what to do and burst into tears.” 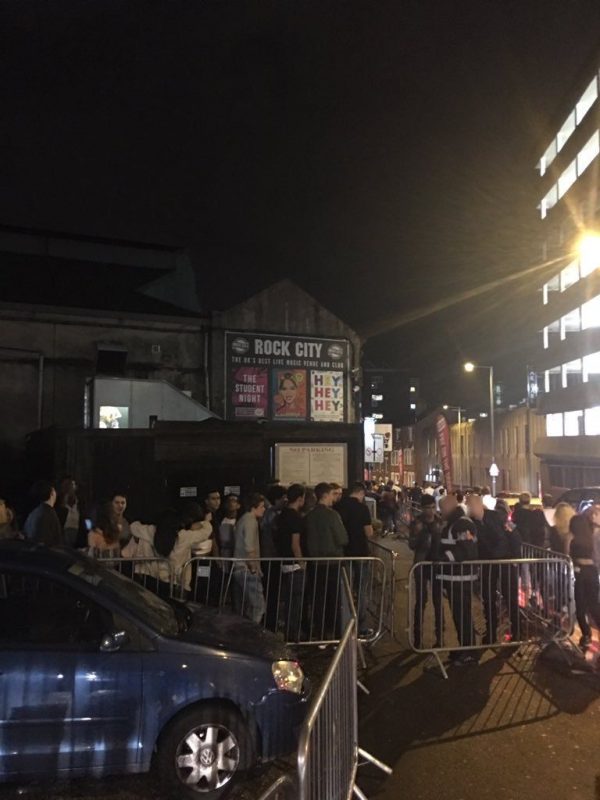 The pair decided to seek help from other bouncers but were met with a less than professional response.

“The bouncer who had done it was laughing and when I approached numerous other bouncers and told them what he had done they also laughed in my face.”

“After 45 minutes of being laughed at and not taken seriously, another man, Andrew Smith, from Carpe Noctum, who own the brand Crisis, had noticed the commotion and come over. Frankly he was the only person I had spoken to that had taken me seriously.”

Andrew Smith was among the many people that commented on Michaela’s original post, who seemed to express concern for the situation, offering his assistance in rectifying it. His comment made a point of explaining the fact that the bouncers that Crisis use are not affiliated with Crisis itself, but are from another company. 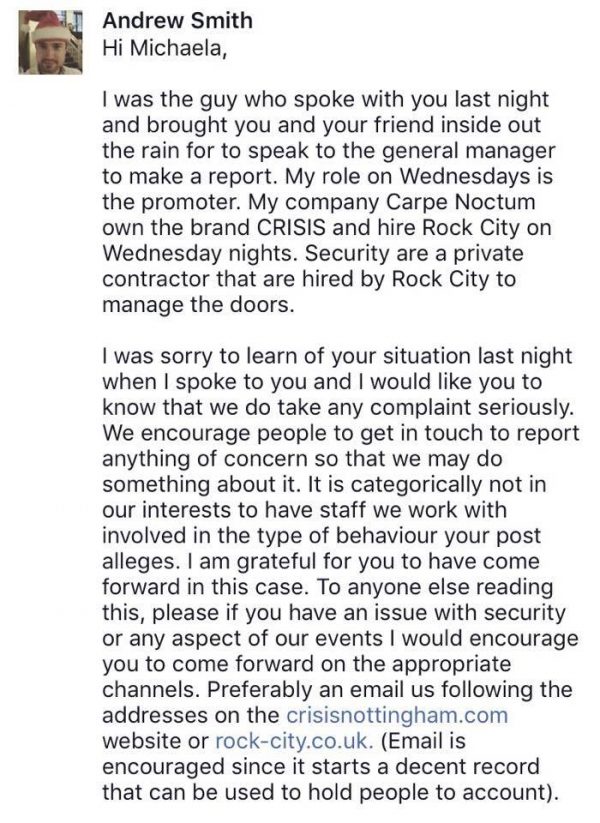 Michaela was taken inside where she made a statement with the general manager including a description of the bouncer. She was told the club would review CCTV and be in touch. However, she is yet to hear back from anyone.

Not that it should make a difference, but Michaela described the fact that she was sober, wearing jeans and a hoodie, and was still touched aggressively by a male in a position of power.

“The bouncers are always rude and aggressive for no reason but I keep myself to myself and don’t cause any trouble which would give them any reason to start on me.

“These are professionals who are supposed to be there to keep people safe. I’ve never felt so unsafe. I’m astounded this has happened to so many other girls. These bouncers feel they are in a position of power and can frankly do what they want. It’s wrong.” 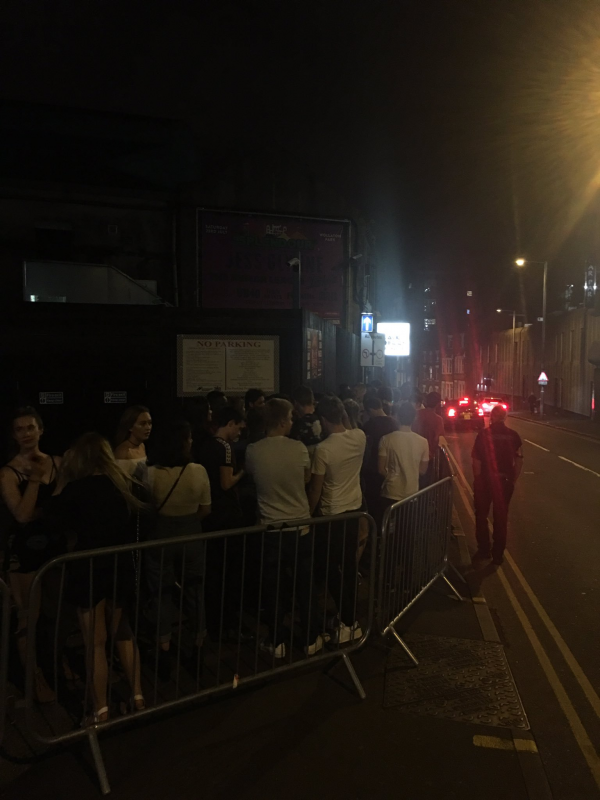 Despite the fact that Michaela is still awaiting contact from the club, the general manager from Rock City, Mark Smith, told The Tab:

“Subsequent investigation of the incident, including a review of the CCTV footage, has shown that she was asked three times to move out of the way of an oncoming vehicle by the security team. As she did not comply with the requests, she was removed from the queue and turned away from the club. A senior member of the Rock City management team and other independent witnesses have also given statements to that effect.

“In our opinion, the doorman acted appropriately in the given circumstances.

“We would like to reassure all our customers that we take their welfare very seriously and urge them to work with us to ensure everyone can enjoy their evenings safely.”