No one has time for this right now ffs

For the past few days, students have not been able to connect to the university’s Wi-Fi eduroam.

It has been said by the IT services that the network has had major issues for the past four days. People have even said once you disconnect from the network it’ll be nearly impossible to get back on.

Beth, a third year Politics and American Studies student told us: “I got to the library and noticed my laptop was taking forever to connect to Eduroam. It’s slow at the best of times but this was another level.

“After attempting to disconnect and reconnect for over 15 minutes I went to the library’s IT Services Desk who said ‘let me guess, Wi-Fi? It’s down for everyone and has been for the past four days. Some devices will still connect to it but most won’t after they drop connection.’

“I then asked him what he recommended as I have two deadlines in the next week and 7,500 words due. He told me to ‘use a PC’ or ‘try my luck with UoN Guest’, I’m sorry but at £9,000 a year that is simply not acceptable. I asked him when it’s likely to be fixed and all he said was that ‘everyone is looking at it’.” 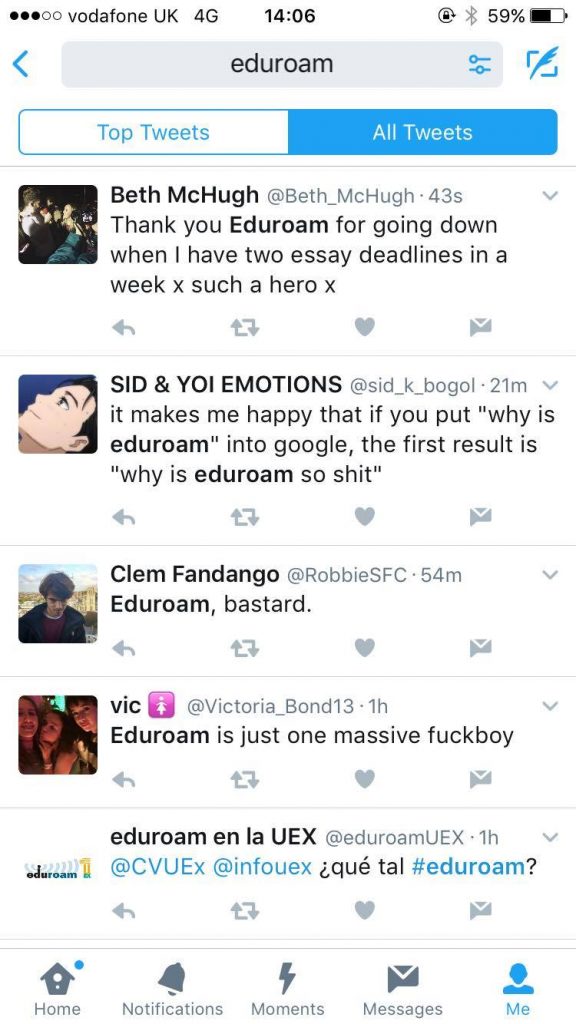 the levels of library animosity have never been higher

There are obvious concerns from students about upcoming deadlines not being completed. This issue will lead to some students feeling especially anxious.

Jon Cox, the IT manager stated in an email sent to The Tab “I can confirm that we are currently experiencing intermittent though widespread connectivity issues relating to the wireless network at the University of Nottingham, which includes Eduroam.

This is being addressed as an absolute priority and we have a major incident team working to resolve this as quickly as possible. The outcome of our investigations do not suggest at this stage an issue with the Eduroam network beyond its use at the University of Nottingham.”

Best to heed the advice of the IT desk and use one of the university computers. Better yet, get off campus and wait for this nightmare to blow over.