My Day Without The EDL

On a day that promised protests and marches, all we got was an angry youth and a man with his dog.

The fallout from the murder of Lee Rigby in Woolwich at the hands of two Islamic extremists has been huge, with protests and counter protests riddling the country.

The English Defence League promised a march at 1 pm in the city centre’s Market Square, and a counter protest was duly organised by United Against Fascism.

You would expect to find a strong police presence at such an occasion, with the square slowly filling up with enraged Stone Island clad skinheads, Strongbows in hand. Instead I found one lone officer, a police surveillance van, and a meek looking Socialist Worker’s Party stall pushed up against City Hall. 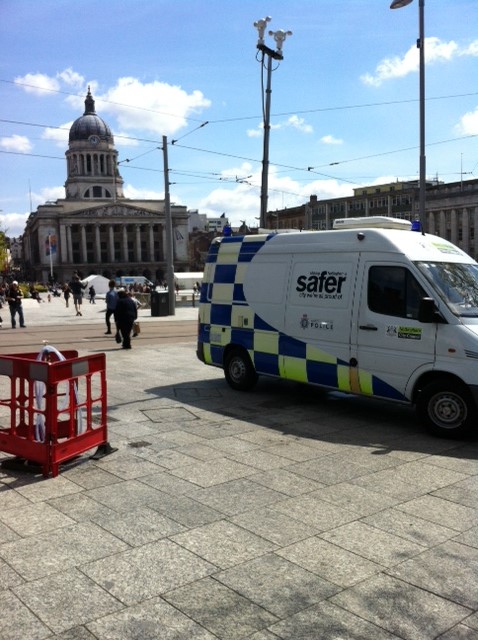 The officer on patrol of the square, who could not be named or photographed, said there was a “high transient population through Nottingham on a Saturday”, hence his presence. He claimed the police had received no intelligence of a protest or counter protest from either the EDL or the UAF.

It turns out that the Nottingham branch of the EDL had shipped off to join their brothers in Newcastle. 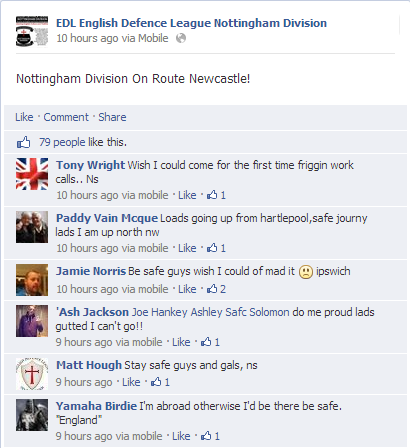 With no EDL in sight, the friendly SWP provided a source of information. Julie Webster the secretary of the Nottingham UAF, manned the stall, ready for the EDL to turn up. Having received news from a  number of sources that a protest had been planned, Julie promptly planned a peaceful counter protest. 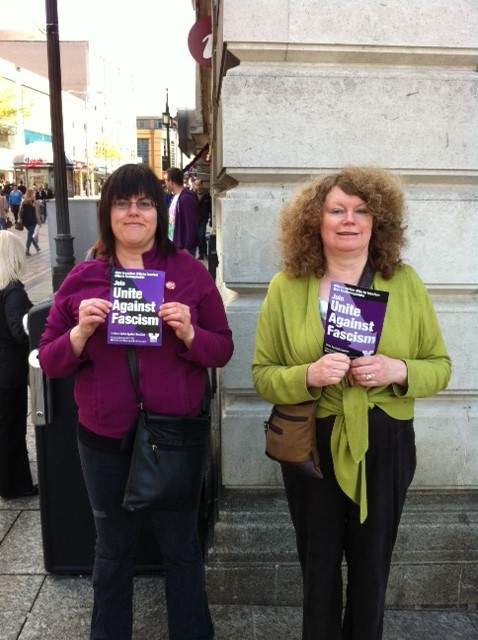 Julie Webster (left) and Mary of the Nottingham UAF

“If they aren’t here we’ll just leave them to it, and we’re not going to run after them and intimidate them.

“We believe they are trying to make political capital out of the horrific murder of the soldier in Woolwich, which was unjustifiable and inexcusable. You can be against the killings without blaming all Muslims for it.

“The feeling that somehow all Muslims are guilty for this is pure and simple racism. And we feel if you don’t oppose these people, they have a habit of coming back.”

What did she think of the protest at the University over the Easter? “Again they tried to use their agendas to blame all Muslims. There were at the most 25 people in a carpark when no students were even at University.” 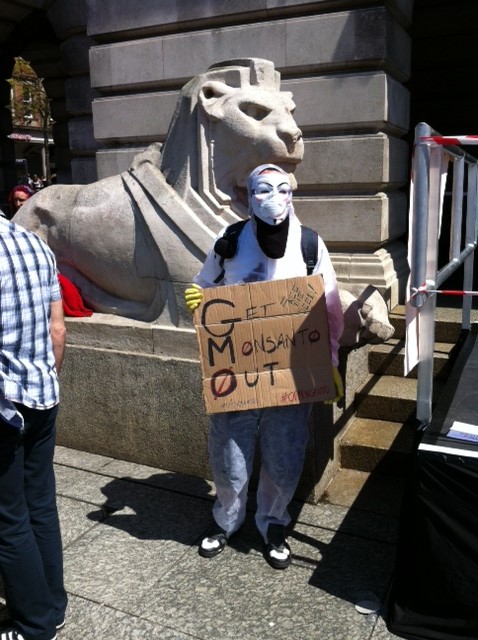 Supporters of the UAF began to gather and by 1pm at least 70 had signed their petition. They were joined by protestors against Monsanta, stem cell research, genetically modified organisms, the bedroom tax and several other issues.

Their array of posters and banners soon became the focus of much attention, as did their choice of costume in some cases. 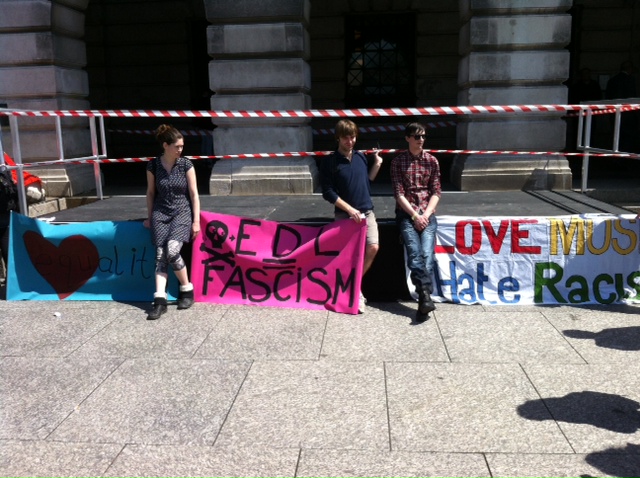 Clearly the slogans were not to the liking of all that passed by. Andrew, 26, questioned the wording on the pink poster, “EDL = FASCISM.” One masked UAF member responded, “The EDL are here.”

Andrew retorted, “Oh yeah? Well I’m here!” before storming off to roll a cigarette on the steps of City Hall.

“I’m born and bred in Nottingham and all my mates are as well. We’re all English lads born and raised here and when we’ve seen what’s been going on in the news and all of them have said the same as me, why have we not fucked them off?” 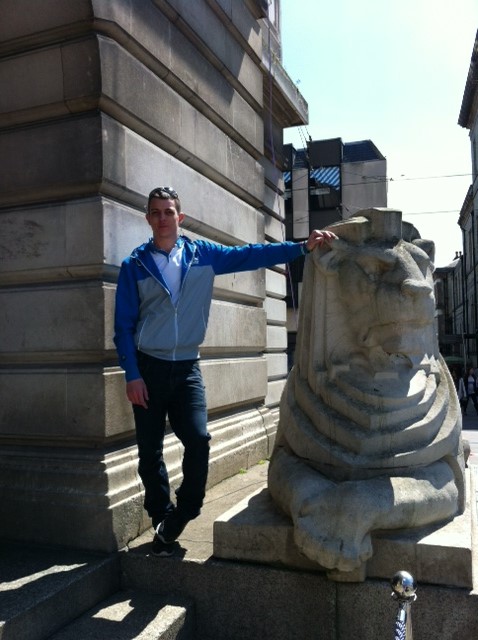 Are you disappointed there’s been no march or protest from the EDL today? “I am to be honest mate. They’ve killed a soldier on our turf, that’s all out war to me, I don’t like it. The way I see it they’re just looking out for our country.

“If I was to beat up a Pakistani man right ‘ere, and batter the fuck out of him, I’d get slammed into jail for racist abuse and everything, they’d slam the book at me. If a Paki man was to beat me up, he’d only get done for assault.  But they can go chop a soldier up like that!”

Do you feel a sense of bias then? “Yeah I do. We’ve given them these rules and said we’ll protect you and now they’re just abusing them. That’s where the rules and the laws go into a grey area.”

Police were later seen following Andrew as he stormed off, agitated by the protests of the UAF and their pink poster.

One man dressed in camouflage trousers with a blonde mohawke was seen asking his girlfriend to take photos, while he performed Nazi salutes behind the back of police officers. 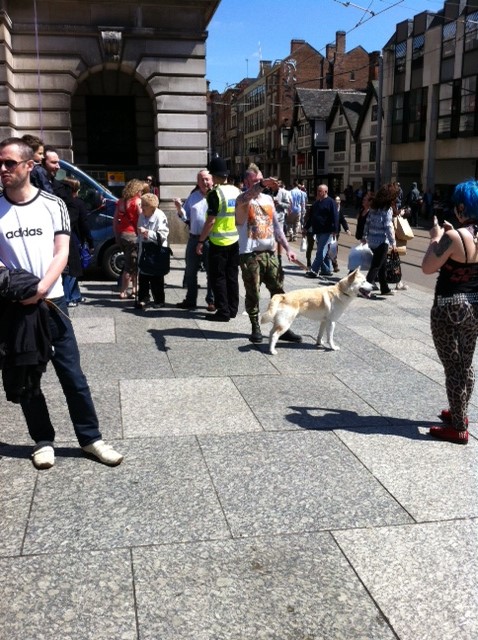 “Two meatheads”, as described by police, were seen acting shady and appeared to be “scouting out” the crowd according to Julie Webster. “Their body language made them stand out.”

Police followed them before giving them a good talking to and seeing them on their way, far from the UAF’s protest area. 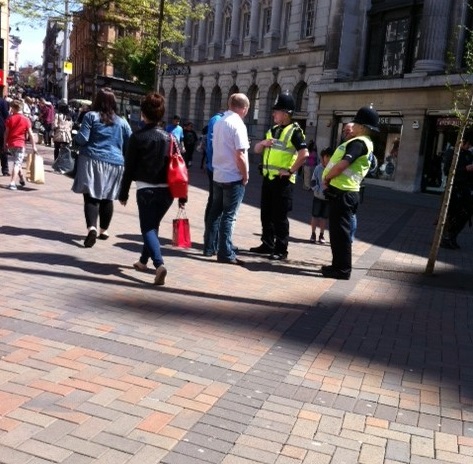 One UAF member added, “another total non show that displays they aren’t welcome.”

However, some EDL did eventually show up: two student members of the English Disco Lovers. 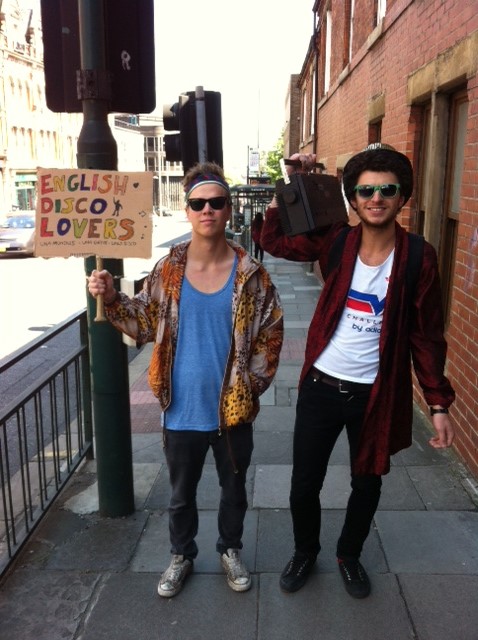 Special thanks to Ben Kennedy for his help.