He made sexist remarks about a Cambridge student recently

Robin Marshall was accused of sexism yesterday after tweeting about waking up next to Lola Olufemi, the University of Cambridge Students' Union Women's Officer.

The professor of Physics and Biology at the University of Manchester deleted his tweet but screenshots are circulating online. 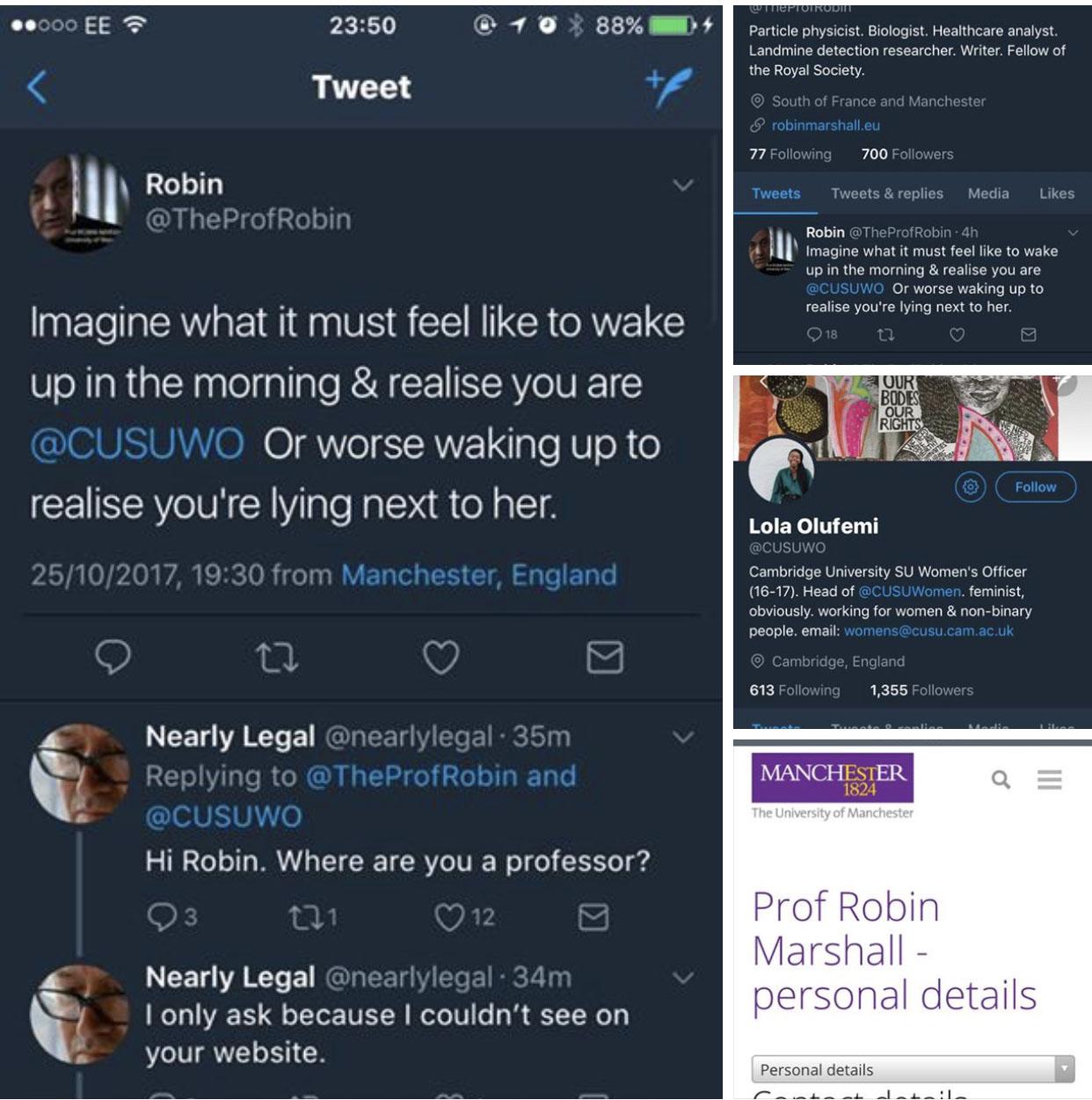 The tweet reads: "Imagine what it must feel like to wake up in the morning and realise you are @CUSUWO Or worse waking up to realise you're lying next to her."

He is a fellow of both The Royal Society and the Institute of Physics, and seems to be a friend of Brian Cox, after supervising him during his PhD.

After further investigation, The Tab Manchester has found that the professor has a history of misogynistic tweets and has liked multiple tweets criticising the Islamic faith.

If you do not like facts and you are PC, LGBTIDK, vegan,flat earthist or whatever do not read this thread.
Nor am I interested in yr thinks

Professor Robin Marshall makes it very clear that not only is he insistent on broadcasting his offensive opinions, despite his role in the academic community, he is also not open to hear anyone else's.

Dear genderists, if a woman had conceived, built, operated & analysed gravitational wave project, she'd have got Nobel. Not rocket science.

Anyone who went through divorce court will recognise EU Brexit posture. They are the wife who did fuck all but wants both estate & pension.

He has "liked" a number of offensive tweets, including some of an Islamaphobic nature, including one from Pauline Hanson, an Australian politician who has previously been accused of racism.

#Manchester bomber was the son of Muslim refugees. We must look honestly at the problem of 2nd generation Muslim radicalisation. #auspol

Has anyone ever seen Jews in Europe marching in the streets, demanding to force Jewish law?

England wake up you have a serious problem pic.twitter.com/pXlNx6Wb1d

The war against the Nazis was over in just a few years.
We were smarter then. pic.twitter.com/iXjIGZ4T2i

Students, parents and other professionals have reacted with disgust to the professor's comment.

But you couldn’t manage that. Indeed, sexual insult was the first thing you went for. Which rather suggests you are a sexist arse.

didn’t anticipate spending this evening researching the complaints procedure at the uni of Manchester and yet @TheProfRobin here we are!

The University of Manchester said in a statement:

"The University of Manchester is aware of this issue and is investigating it internally."

"We would like to make it clear that the University has a zero tolerance approach to any form of bullying and harassment."

Robin Marshall has tweeted an apology to Lola Olufemi, and the University of Cambridge.

I also apologise to the University of Cambridge who suffered by association.