UCL Goes For Daily Mail After Race and Gender Row

Professor David Price, Vice-Provost of Research, has written an open letter to The Daily Mail on UCL’s website in retaliation to an article “commenting on the race and gender of UCL academics appearing on Newsnight.”

The V-C released the letter on Thursday, revealing his “deep disappointment” in a column written by Ephraim Hardcastle which suggested that a UCL academic was brought on to the current affairs programme due to her “gender and birthplace,” rather than her academic credentials. 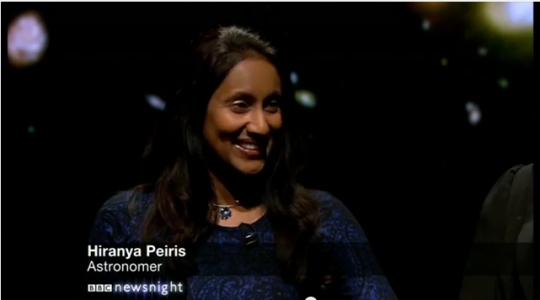 Dr. Peiris talks excitedly  about the developments on Newsnight

The controversial newspaper went on to imply that Dr. Peiris and Dr. Maggie Aderin-Pocock, a space scientist and co-presenter of ‘The Sky At Night,’ were selected to discuss scientific advances in relation to The Big Bang theory as “Newsnight’s Guardian-trained editor, Ian Katz, is keen on diversity.”

Dr. Price called the complaints “profoundly insulting” before going on to say that Dr. Peiris  is a world-leading expert on the study of the Cosmic Microwave Background, and her fellow interviewee Dr Aderin-Pocock is ” a highly-qualified scientist and engineer with an exceptional talent for communicating complex scientific concepts in an accessible way.”

The professor was on the show to talk about a discovery by a radio telescope at the South Pole known as BICEP 2, which found ‘gravitational waves’  emitted a tiny fraction of a second after the Big Bang. The waves were predicted by Einstein in his Theory of Relatively back in 1916, and if confirmed would mark a landmark day for physics and astronomy, with the possibility of Nobel prizes for many of those involved.

The letter is directed at Mail editor Paul Dacre, who came under fire recently for his treatment of Labour Leader Ed Miliband’s father and his professional conduct at the newspaper.

Dr. Price’s message is adjoined by  comments from Dr. Peiris herself who said: “I deeply pity the sort of person who can watch a report about ground-breaking news on the origins of the universe and everything in it, and see only the gender and skin colour of the panellists.”

The Vice-Provost finished his message by adding that he looked forward to a reply from the paper. Watch this space.