Honor Oak Park, KCLSU’s sports grounds, with a (I hate to admit it) swanky new clubhouse, witnessed the first ever Hockey Varsity in the London Varsity Series last night.

The evening started off quite tame, with feeble attempts at chants from both sides. Strand Poly were unintelligibly chanting on and off, spurred on by their lion mascot in red. Burlington Bertie burst out in bits and pieces.

But the night was still young, and the crowd was still warming up with Snakey Bs in hand. 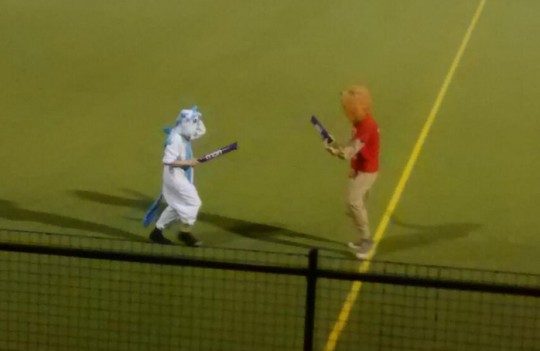 UCL Unicorn v King’s Lion – one wonders why our mascot gave up one of her purple swords to the enemy.

The women’s match pushed back at 6pm sharp. Only 3 minutes had gone by when our UC girls pushed through their defence and scored a clean goal off some nice passing from the right wing into the D. 1-0 to UCLU.

King’s returned soon after, attacking our D with stepped up intensity. A solid UC defensive line protected the goal from the King’s threat, clearing 2 short corners back upfield.

However, a rogue King’s girl broke into our 25, took a hit from the top of the D and scored, equalising the score 1-1.

The rest of the first half saw both teams fighting for another point but to no avail. Half time score: 1-1.

The second half began with King’s in possession, repeatedly attacking into the D but consitently being denied. UC managed to successfully defend against 2 short corners, however on the third, King’s managed to slot in a goal off a rebound. 2-1 to King’s.

Soon after, King’s came back to threaten UC goal. The first strike on goal was a miss, but on the second attempt, the ball was flicked into the net, bringing the score up to 3-1 to King’s. 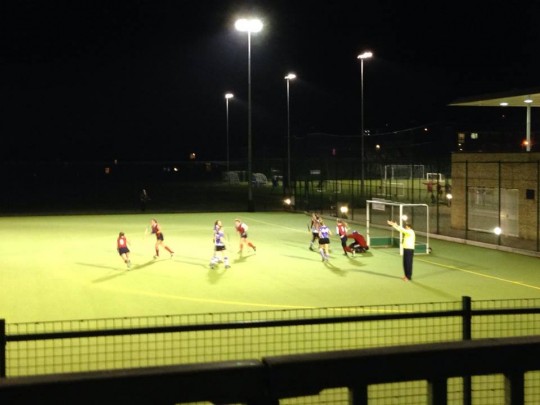 Ten minutes into the second half saw the first UC short corner being awarded. There were several attempts to put the ball in off rebounds, but our UC girls were unsuccessful.

A King’s player stole possession from UC, bringing it up-field and slapping it into the D. The ball deflected off a waiting King’s stick cleanly into goal. 4-1 to King’s, an unprecedented score difference to the team UC beat earlier this season.

With a green card, then a yellow card, and a plethora of short corners against UC, our girls in purple and blue were unable to turn the tables round. The game ended 4-1 to Strand Poly.

UC fans cheered on our girls’ quality performance on the pitch with chants of Burlington Bertie. Because at least we go to UC, you see.

Only a minute into the first half, our UC men, in the better looking kit, gained possession off a King’s push back and broke through Strand Poly defence and into the D. The first shot on goal was unsuccessful, but a free hit was awarded to us. With some sharp passes into the D, our UC men slotted the ball into goal. 1-0 to UCL. Cue even more Burlington Bertie.

Turning around a King’s short corner, UC pushed back into their 25, and after several attempts on goal, a short corner was awarded to our UC men. With a clean strike from the top of the D, UCLU added another point to the (imaginary) score board. 2-0. The UC crowd went wild, cheering on their league-winning hockey heroes.

King’s were quick to turn the game around, pushing up into our 25 and through to our D. They were awarded a short corner – they didn’t attempt a first strike but instead messed around with the ball for a bit, earning themselves another short. A third foul in the D gave King’s a third short – unfortunately a big hit from the top of the D and a clean deflection into goal gave King’s their first goal. 2-1 with UC in the lead.

Some simple mistakes allowed King’s to regain possession after UC’s pass back. A solo King’s player managed to break into UC’s D  making our keeper rush out to put pressure on the King’s player and save the first shot on goal. However, a King’s support player was quick to pick up the rebound and slotted it into goal, levelling up the score to 2-2.

Several short corners later for both sides and an impressive dive from UC keeper to save a King’s attempt on goal, the first half ended with 2 goals each. 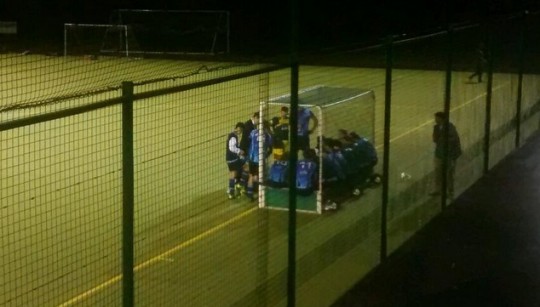 Half-time talk – how to break the draw?

The start of the second half saw the ball travelling up and down the pitch, with several attempts from both sides to break the stalemate.

A break in UC structure allowed three unmarked King’s players to enter the D, placing paramount pressure on our keeper. In a 3 v 1 situation King’s scored, bringing the score to 3-2 to King’s.

A yellow card against UC forced all our men to retreat and defend and half court press against King’s. An unfavourable ref decision to award a short to King’s for a foul inside the 25 but outside the D. The passionately booed ref pulled out a green against a UC player who attempted to dispute his decision. Angered UC fans berate the ref. Still, a solid UC short corner defence denies King’s attempt at goal.

Soon after, King’s put in some (unfortunately) well-placed tackles and turned the ball around after a UC 16-yard hit. With some dribbling round UC defenders and a nice push into the D, the ball was flicked into goal, giving King’s a 2-point lead.

A foot at the top of the D gave King’s another short. UC saved it and were awarded a free hit. The ball was brought beautifully up the pitch and into the D, where we were given a short. A slap from the top of the D was deflected straight into goal, closing down the score difference to 4-3 with minutes left on the clock. 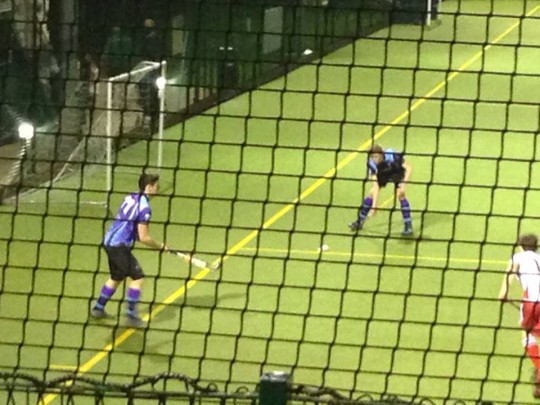 In the final moments of the game, another UC man was yellow carded. All UC players rushed back into the 25 to defend and were quick to regain possession.

However, despite heightened chants from both UC and King’s fans, the score remained 4-3 to King’s at full-time.

It was an exciting night of ref-booing and King’s heckling. Our UC hockey players performed excellently on the pitch, demonstrating great skill and sportsmanship. However King’s were able to break down UC’s game and managed to secure the first 2 wins in the 2014 London Varsity Series. King’s 2, UCL 0.