‘Everything A Musical Should Be’

REVIEW: How to Succeed in Business (Without Really Trying) 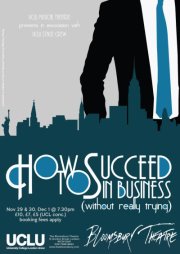 Gloriously arch and wildly funny, the UCLU Musical Theatre Society production of How to Succeed in Business (Without Really Trying) is possibly one of the campest visions to have ever been brought to the Bloomsbury Theatre. It is also probably one of the most fun, and full credit is due to producer Sam Lansdale and co- directors Tom Chesover and Tom Edwards for creating a piece of musical theatre which combines razzmatazz with some excellent vocal performances to full effect.

The show is undeniably cheesy, but is streaked through with a vein of satire that prevents the musical from becoming derailed by its own schmaltz. In the society’s interpretation of this Broadway hit, a combination of well-realised slapstick comedy and larger-than-life characterisation ensured that the audience laughed throughout. Particularly effective was the ‘voice of the book’; by lending this narrative device the dulcet tones of Morgan Freeman, the production engaged the audience with a well-known pop-culture joke which was highly entertaining.

The scenery and lighting was of a similar quality, with a stunning backdrop of New York City filling the stage. Whoever painted this deserves specific praise as it had a wonderful depth and really dressed the stage for the actors. The corporate environment of the Worldwide Wicket Company was ingeniously realised via movable scenery that made full use of the stage, and when teamed with bold and vivid spotlighting had a striking visual impact. The red wash across the stage, when a particularly sultry and promiscuous character made her entrance, was rather charming, as were the mirrors surrounded by light bulbs which enabled the star character of Finch to break the fourth wall. However, the artistic vision was fairly predictable, aiming for a bold and cheery atmosphere as opposed to any particular direction. Some Art Deco touches, for instance, would have paid homage to the skyscrapers of New York City and added some edge to the production.

Classy and vivacious, the orchestra were magnificent and conveyed the buoyant show tunes to the audience in a wonderfully rich style. Similarly, the vocal talent on display was superb, with the beautiful singing voices of the cast delivering song after song with charm and energy. Unlike some productions, the cast of How to Succeed… managed to sing powerfully without it seeming forced or overly schooled, and this stands as testament to excellent musical direction from Jamie Pegge. Particular credit must be given to Richard Upton, in the role of Finch, and Hayley Cameron who played Rosemary: as the two leads, their voices were required to carry the production which they managed with aplomb.

The dancers tackled a variety of styles, from tap to jazz, allowing their obvious talent to carry some fairly complicated and slickly produced routines. Becky Harrison, the show’s choreographer, has cited Fosse as an influence – this could have been brought out to a greater extent and added more edge to the choreography. However, the final dance routine to the climatic song Brotherhood of Men was animated, deliciously over-the-top, and had most of the audience doubled over in their seats with laughter. As a piece of musical theatre, this section was near perfect and may be considered the stand-out moment of the production.

Admittedly, the acting in How to Succeed… is nowhere near as challenging as the musical numbers and this resulted in some fairly two-dimensional characterisation. This is a musical that not only utilises stereotypes, but revels in them: this does not provide much scope for Olivier level acting! However, Tom Ganley brought a lively physicality to his role as the unpleasant Bud Frump, and Lizzie Jay’s dirty-minded Smitty had a lovely energy.

Overall, How to Succeed in Business (Without Really Trying) does not break any new ground, reinvent the wheel or subvert convention. Neither does it have delusions of doing so. It is simply an excellently performed celebration of all that is clichéd, cheesy and downright brilliant. In short, it’s everything a musical should be.