As the UCLU Drama Society performs one of the twentieth century’s most significant plays, The Tab’s Culture Editor delivers her verdict on the production’s tear-jerking success.

For a play so utterly packed with political, emotional and powerful messages, it would be easy to imagine that last night’s UCLU Drama Society’s performance of Cecil Phillip Taylor’s 1981 drama ‘Good’ could have gone horribly and tragically wrong. Indeed, a few first-minute jitters were apparent in some members of the cast, however they swiftly recovered, and powered through to produce one of the society’s most triumphantly passionate and profound productions to date.

Set in pre-war Germany, the play tells the story of how liberal university professor John Halder’s initial resistant stance towards the Nazi party could be broken down through astute seduction and rationalisation, to the point that he joins the infamous and ruthless SS and starts to question and reject his relationship with his Jewish best friend, Maurice. 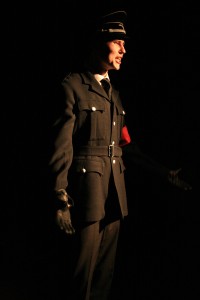 Director Rob Beale’s decision to stage the production in the extremely intimate venue of The Garage Theatre Workshop was a wise one, engaging the audience and inviting them to truly feel a part of the events in the play. Simple, wash lighting and spotlights against a black background directed the focus completely onto the characters, an aspect that is highly important in such an emotionally charged plot.

The music used was also very intelligently and carefully chosen. The three-piece band of a clarinet, cello and keys played music fitting of the 1930s and 40s time period, effortlessly aiding in creating the atmosphere and tone of the production. More profound, however, was the effectiveness with which the main motif, repeated throughout the play, yet almost unnoticed, seemed to linger in the mind after the production, mirroring the subtle indoctrination experienced by the protagonist.

What made this production truly goodthough was the sheer wealth of talent performing on stage. The cast are a fantastically talented group of individuals, who collectively dealt with such a profound, powerful and deeply important and moving message with emotion and flare. It is extremely difficult when performing in a play with such a dark theme to make an audience fall into waves of laughter, grip them with shock and throw them into despair in mere moments. In fact, so great were the actors and their natural chemistry that the audience on many occasions was moved to tears. 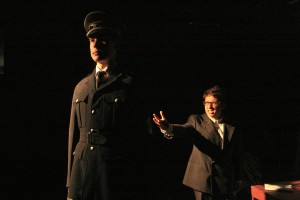 The two stand out performances of the night were undoubtedly Roland Nathaniel in the role of John Halder and Adam Pabani’s portrayal of Maurice. Quite moving when together, these two performers also commanded stage presence as individuals. The expressiveness of Roland Nathaniel’s eyes invited the audience into his emotions and his character, making it extremely difficult not to sympathise with him despite his flaws and weaknesses; whilst Adam Pabani had the audience in stitches one moment and tears the next.

Of the female performers, Naomi Mackay put on a sterling performance as Halder’s first wife, Helen. Her expressive movement and engaging acting was undoubtedly very hard to ignore, and she commanded such empathy from the audience.

The decision to perform a play with such powerful yet delicate themes was a risky one, but one that deserves utter respect as it was more than merely a success. This is unequivocally one of the best, most emotional and profound productions to have come out of the UCLU Drama Society in a while, and if you don’t believe me, go down on Friday or Saturday evening to see for yourself…If you can make it through the crowd of people queuing to see it too that is!

The UCLU Drama Society’s Production of ‘Good’ is being performed on Thursday 18th, Friday 19th and Saturday 20th October at The Garage Theatre Workshop. £3 entry, performances start at 7.30pm, doors open at 7pm.