Walking to the Print Room Café, the setting of the Writers Society’s first Open Mic Night, I contemplated my coming literary adventure. Torrential rain drowning me after a long day of Thursday lectures, I hoped that this would not be the pathetic fallacy of the night ahead (yes, I did just drop a GCSE English literature term right there. No, don’t judge).

Minutes before I arrived it dawned on me the kind of people I was walking to go meet and I was scared. Hipsters is their name, being hip is their game. And not only would they be hipsters but those who like to express themselves through poetry and the written arts. How unprepared was I, a mere layperson with an interest in writing, who just about knew her Carol Anne Duffy from Duff beer. This was going to be an experience at least…

And an experience it was. An eclectic army of creatives awaited me, from nervous freshers, open-mic old timers to romantic rappers and deeply profound lyricists. Headliners Sabrina Mahfouz and Zia Ahmed, two brilliant young writers in their own rights who have made a name for themselves in their craft, sandwiched the array of diverse, intelligent performances over the night.

First of our headliners was Zia Ahmed, no doubt a pro yet nervous looking and sporting a fine, woolly hat in the cosy confines of the Print Room Café. He left the audience automatically absorbed in his words with a effortless charm and sharp thinking lyrics in his four spoken word performances. Lyrics like ‘Jack and Jill went to William Hill and lost a lot of money’ and ‘I read the Sun. I like big puns and I 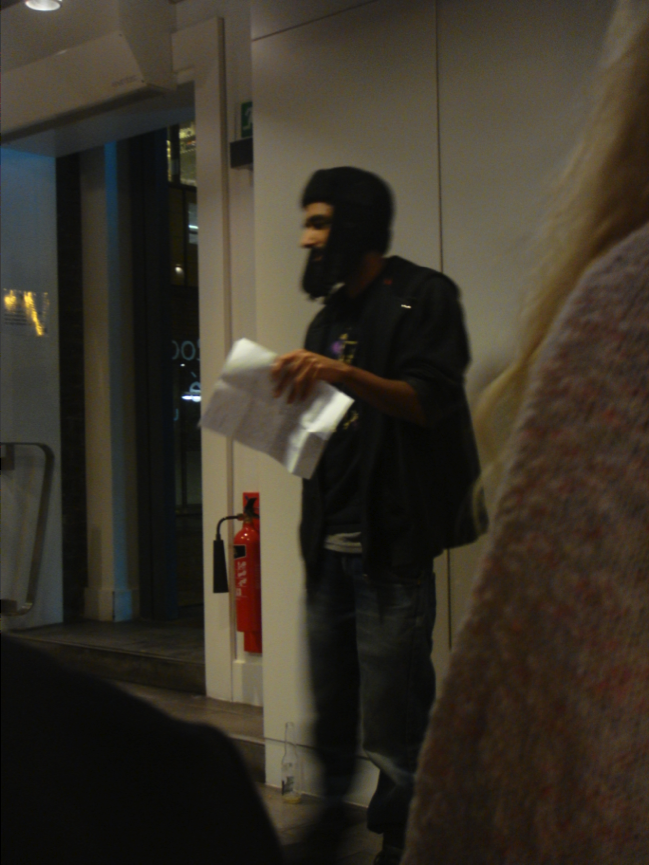 cannot lie’, went down well with the crowd as he touched on themes of identity and ethnicity speaking of his own Pakistani background. A poignant reading of a self-conscious letter of advice to an unborn nephew also became an echo of a popular theme among many writers of the night, about the struggles of coming of age.

Many brave performances later including touching poems of fourteen year old female political activists, stories of drug use and lost loves, the audience were treated to the wordsmith that was the second headliner of the night- the equally talented Sabrina Mahfouz. 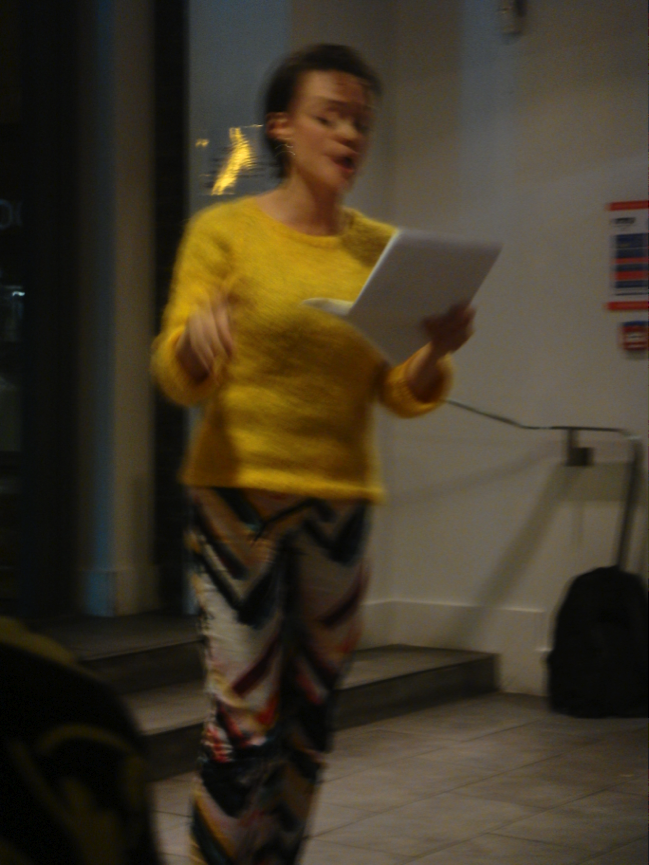 With a series of acclaimed plays and raving reviews under her belt, (one in particular being the one-woman show ‘Dry Ice’ directed by Friends veteran turned director, David Shwimmer which focuses on a few hours in the life of part-time stripper Nina), Mahfouz is a lyrical genius to say the least.Whilst her poem ‘Gravy’ had the audience in stitches for it’s comical telling of a rather posh woman so drawn to the texture of the gravy on her dining table she had to drink it from the gravy jug itself, Mahfouz’s poetry revealed great substance. ‘A Shop selling Speech’ about the recent revolution in Egypt (Mahfouz’ native country) which talked of the status of freedom of speech and ‘Page 3’ a three minute plea for a new wave of women to stand against the glamorisation of topless models both used comedy as an antidote to the more serious subjects they presented. In the words of Mahfouz herself- “real talk”- her words had meaning and these messages were worthwhile listening to.

So I ask myself now as I sit squashed on the Northern line home four hours later, being burped at by a portly, middle aged man dressed head to toe in black beside me, whether the night was worth it. Dude, if I could just give you one word- totally.

It may have been 50 shades of hipster but it was a truly remarkable, literary experience that really shed light on the masses of hidden talent lurking around the UCL grounds. I must admit there were a few WTF moments (a particular favourite was what I assumed to be a reworked, 327 BC version of 50 Shades of Grey…) but overall I surprised myself by how much I enjoyed it, how nervous I was for those preparing to perform around me and how much by the end of the night I wished it was me standing in front of the microphone with an audience of wonderfully attentive and invested listeners.

I can’t tell you exactly what to expect from next month’s Open Mic Night with the Writers Society-believe me prepare for the unexpected (poems about ‘curly breasted splovers’ and talking dogs anyone?). Yet that is the best part of the whole experience. What I can tell you is that the £3 entrance fee is well worth it and for an event that showcases some genuine talent only once a month, it would be a shame not to go along and watch. Long live the hipster!