The blog she endorsed says that ‘female biology and socialization matter’

Simone Buitendijk, the professor taking over as Vice Chancellor of Leeds University in September, has been embroiled in a scandal where she liked a tweet promoting a blog with anti-trans sentiments.

Simone, who was previously provost for Imperial College London, deleted her twitter account and apologised after coming under fire for liking and sharing content which was deemed anti-trans.

The original tweet that was liked by Prof Buitendijk

One tweet that she liked contains a link to the blog "The New Backlash", a blog with content that includes: "I am afraid to publicly state my opinion that female biology and socialization matter – because that opinion is inevitably framed as transphobic." 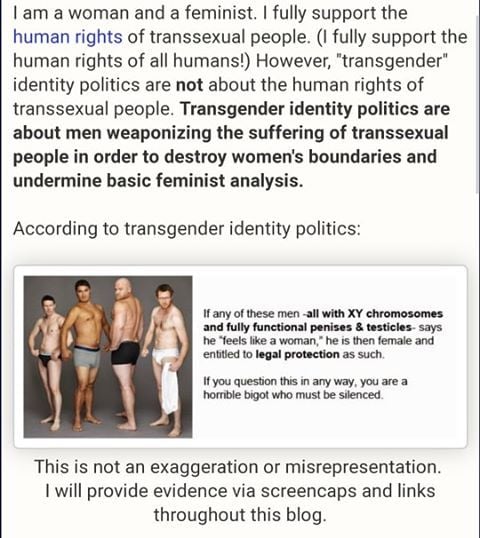 The introduction to The New Backlash

The blog criticises transgender identity politics, and some of the views expressed on the site seek to exclude trans people from certain dialogues.

An excerpt from the 'When biology is bigotry, feminism is hate speech' subsection of the blog

Liking this tweet raised a few concerns among students and fellow staff, which only deepened when Prof Buitendijk shared a Spectator article to her twitter audience titled: "Trans rights have gone wrong." 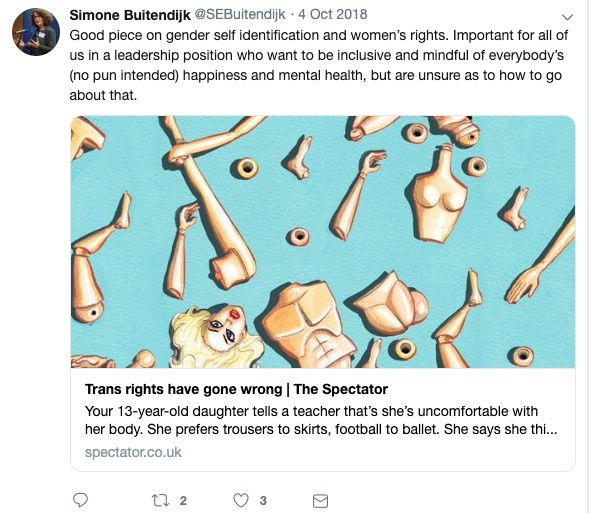 He approached the university’s Physics LGBT+ Allies Network, asking for advice on how to proceed. A few days after the group began drafting a letter.

Prof Buitendijk's response to a colleague's questioning of the article

The open letter was signed by 86 members of the university’s staff and student body, raising concerns about her “engagement with transphobic material and social media accounts.”

Simone Buitendijk apologised at the time and deleted her twitter account. She said in a statement: “Although I support the freedom of academics to follow and engage in debate in all areas, including on social media, on this occasion I now realise that social media is not the correct forum for such sensitive debates."

"I have elected to stop all engagement with these accounts and apologise for hurt or anxiety caused to members of our community. I fully support all trans staff and students and I hope that the open and honest discussion we have had can lead to improved collaboration to ensure a sense of safety and belonging for all trans students at Imperial.”

Joanna Wormald, who signed Willsher’s letter, is not fully convinced by the statement.

She said: “I have doubts about whether she (Buitendijk) truly appreciates why her actions were harmful, especially as her statement seemed to frame this as a free speech issue. The bitter irony is that many of these tweets were in the middle of tweets promoting LGBT+ equality or supporting women in STEM. There’s enough transphobia from Imperial students as it is. The last thing we need is for senior staff to echo these views.”

Fruity has cancelled its ‘The Fruitys That Never Happened’ week

Theo Beckett will be walking 50 laps of the park tomorrow, to raise money for the Stroke Association

Warning issued to residents on Headingley Avenue after house party

Have we found an Eddy B Spiderman?

Let’s ignore the fact York made it to number 5

Watch out Leeds, the police are coming for your DJ decks

One group of students are paying £500 to get theirs back

But we can go clubbing at Fruity?

You can even attend in free graduation robes

It has over 125 signatures so far

Can you guess what the K stands for?

Students are using LeedsFess to expose racism within the uni community

Racism has always occurred on Leeds campuses, LeedsFess is just shining a light on it

But festivals are going ahead?

Five Leeds student podcasts you should be listening to

At least some of us were productive in lockdown

Guide: All the Leeds bars and pubs open for bookings or walk-ins

Looking for something last min? This list is your new best friend

Watching the sunrise from Level 11 of Eddy B hits different

The rebate will conclude on May 16th, providing up to 125 days of rent money back

Leeds Beckett is introducing a degree in TikTok