Flat viewings are more akin to the Hunger Games

Queuing outside a Marchmont, Newington or Bruntsfield flat with fifty other students all desperate to secure a flat for the following year has become an unfortunately routine experience for a large proportion of Edinburgh students.

There's a shared resignation among flat-hunters that the chances you have of getting the flat rely, rather absurdly, on the promptness and speed at which your Uber driver rushes you to the estate agent. These mass flat viewings are often decided on who can return a form to an office in another part of the city the fastest – something I'm sure estate agents wouldn't dare do to any other section of the adult population.

Scenes like today's on Warrender Park Road where well over fifty students were queuing outside in 'the beast from the east' have become second nature. We're desperate enough and anxious enough about missing out on flats that we put up with being treated like shit. 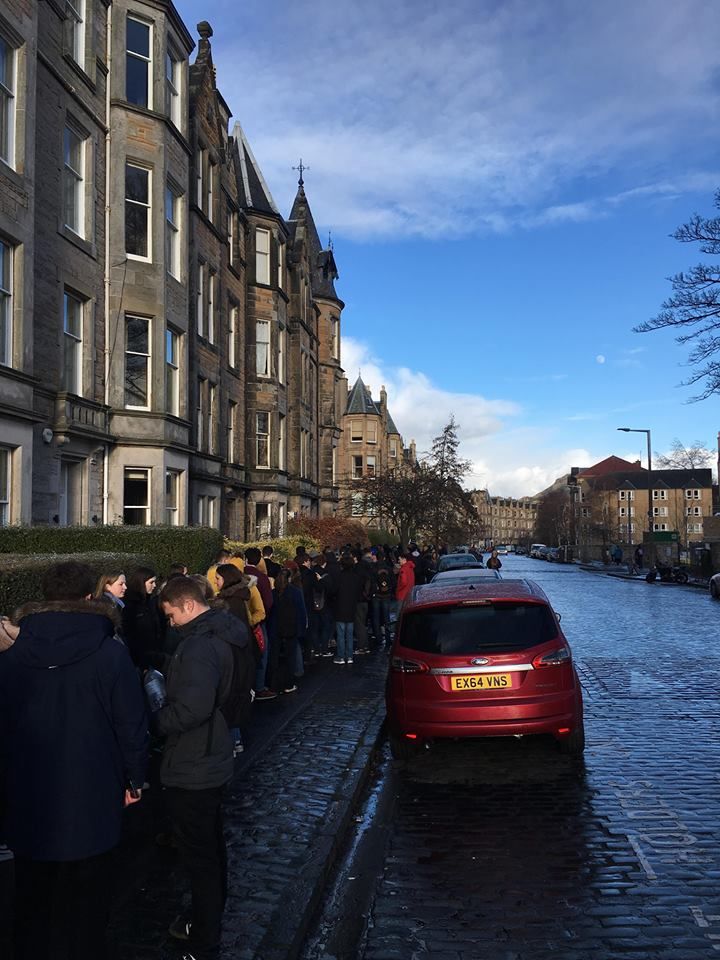 Most non-Edinburgh students would gawp at the idea of mass flat viewings that get decided by mad taxi rushes, but unfortunately we've become passively numb to it.

Not all estate agents are guilty of it, but far too many show no regard and a total lack of respect for their prospective tenants. The disregard, whilst lacking decency, is logically understandable.

With Edinburgh's universities admitting more and more students, the demand for renting flats in locations close to campuses has sky-rocketed. Estate agents know that however poorly they treat students, they'll still easily manage to shift their properties due to the ever increasing demand. Students are unlikely to ever uniformly boycott an estate agent, so there is no real risk to them.

This has been a longstanding problem. Although progress has been made – three years ago Cullen Property encouraged students to camp out overnight outside their office to secure their properties – it's still nowhere near enough.

Some people might look at the queues and think – 'it's just a big queue, what's the big deal?'

The problem is that fifty people are turning up to these viewings under the pretense that they might actually get a flat, when in all likelihood they've basically been asked to waste their time viewing a flat they'll never get. It is not uncommon for students to have to attend well over 20 flat viewings before they secure a flat.

It's not that unreasonable to expect estate agents to arrange flat viewings with fewer people and operate on a first come first served basis when it comes to booking flat viewings.

As somebody at the Warrender Park Road flat viewing today noted, the enormous flat viewings often bring the worst out of students too, as they scramble to do what they can to get to the front of the queue out of desperation. The person said: "Some were queue jumping, some were essentially just pushing people into the bushes as they walked out and claiming it was an accident."

At the end of the day, the flat viewing process is symptomatic of the generally piss-poor way in which students are treated by many of Edinburgh's estate agents.

With this year's EUSA elections only a week away, let's hope that the candidates pledge to stand up against the city's inconsiderate and disrespectful estate agents.